Before starting this series of articles on Machine Learning, I thought it might be a good idea to go through some Statistical recalls. This first article is an introduction to some more detailed articles on statistics. I will be illustrating some concepts using Python codes.

Suppose that we have \(n\) observations, and for each observation i, we have one feature \(X_{i}\).

The true model and the true parameters in real life are unknown. For this reason, we make a selection among several models (linear or non-linear). The model selection is usually based on an exploratory data analysis. An article will further develop this question.

From now on, we will focus on the most basic model called the unidimensional linear regression. This model states that there is a linear link between the features and the dependent variable.

A classic example would be to try to predict the average housing market price in the economy based on the GDP for example. We would expect pretty much a linear relationship between both. You can find the file I will be using here 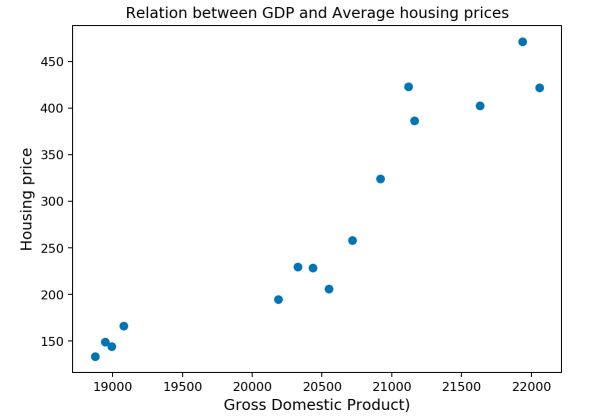 Our intuition was right. The relationship looks linear between the GDP and the average housing price. How do we move on from here?

This approach is known as the Ordinary Least Squares (OLS). We minimize the square of the distance between each data point and our estimate. Why the square? Because the derivative is easier to find, and we take both positive and negative deviations into account.

We can compute those results in Python :

We can plot the estimated linear regression to assess whether it looks good or not : 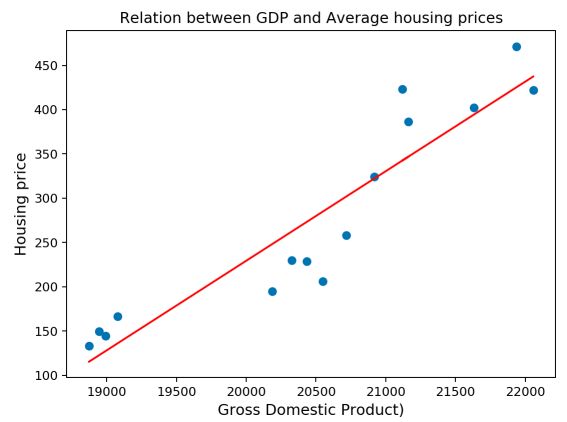 It looks great ! There is a pretty efficient way to do this using Scikit Learn built-in functions.

This will head the same results. Alright, so far we are satisfied by how our estimate looks like. But how do we assess how good our estimate is?

Assess the accuracy of the estimate using R2

A common metric used to assess the overall fit of our model is the \(R^2\) metric (pronounced R squared). The \(R^2\) measures the percentage of the variance of the datas we manage to explain with our model :

The \(R^2\) takes values between 0 and 1. The closer we are to 1, the more variance we tend to explain. However, adding variables will always make the \(R^2\) increase, even if the variable we added is not related to the output at all. I do invite you to check the adjusted - \(R^2\) if you would like to know more about how to handle this issue.

Alright, we have now fitted our regression line and estimated the goodness of the fit. But all the variables included in the model might not be worth including? What if for example \({\beta}_1\) is not significantly different from 0 ?

The expectation of the parameter corresponds… to its expected value. Nothing really new here : \(E(\hat{\beta}_j)\)

The variance defines the stability of our estimator regarding the observations. Indeed, the features might be highly spread, which would mean a pretty big variance.

Now, we do have all the elements required to compute the standard errors of our parameters :

Graphically, biais and variance can be represented this way : 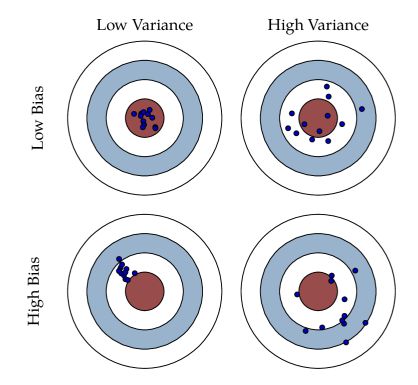 Why are we spending time on those metrics? Those metrics allow us to compute what we call test hypothesis.

For each parameter, we want to test whether the parameter in question has a real impact on the output or not, to avoid adding dimensions that bring no significant information. In the linear regression : \(\hat{Y}_i = \hat{\beta}_0 + \hat{\beta}_1{X}_{i}\) , it would mean testing whether the Betas are significantly different from 0 or not.

This metric is called the T-Stat, and it allows us to perform a hypothesis test. The 0 in the numerator can be replaced by any value we would like to test actually.

How to interpret the T-Stat?

The T-Stat should be compared with the Critical Value. The critical value is the quantile of the corresponding Student distribution at a given level of \({\alpha}\). If a coefficient is significant at a level \({\alpha}\) , this means that the T-Stat is above or under the quantiles of the Student Distribution.

In our example, the T-Stat is pretty big, bigger than the corresponding quantile at 5% of the Student distribution, and the p-value is by far smaller than 5%. Therefore, we reject the null hypothesis : \(H_0 : {\beta}_1 = 0\) and we conclude that the parameter \({\beta}_1\) is not null.

Confidence Interval for the parameters

The same process can be done for the parameter \({\beta}_0\)

Type I and Type II risks

Rejecting or not a hypothesis comes at a cost: one could misclassify a parameter. 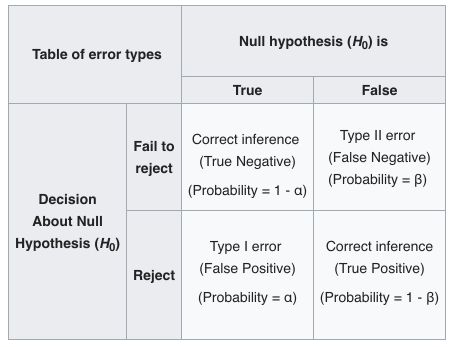 Confidence Interval for the model

Moreover, the prediction risk is different. The prediction risk corresponds to the risk associated with the extension of our model onto a new prediction : \(Y_{new} = \hat{Y} + {\epsilon} ; {\epsilon} ∼ N(0,{\sigma}^2)\) . We have a new source of volatility : \({\epsilon}\) . And this leads to a modified confidence interval :

These two confidence intervals can be plotted on the previous graph : 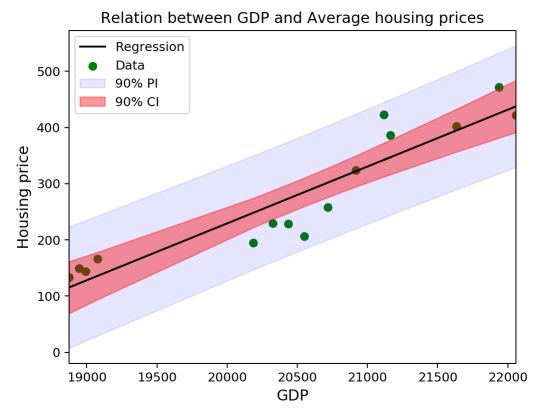 Otherwise, the conditions on \({\epsilon}\) remain the same.

The dataset I’m using can be found here. 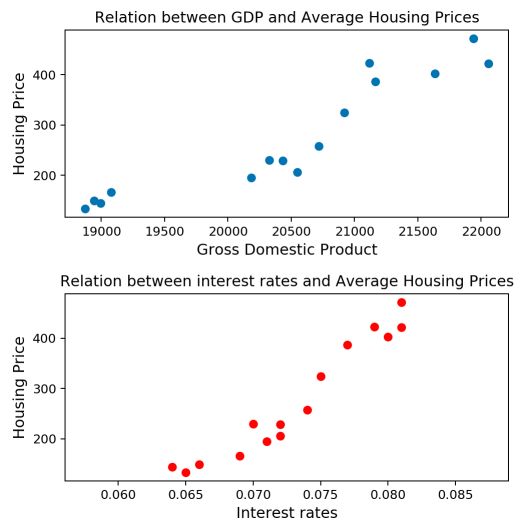 The linear relationship with the interest rate seems to hold again! Let’s dive into the model.

Recall that to estimate the parameters, we want to minimize the sum of squared residuals. In the higher dimension, the minimization problem is :

We can use the Gram matrix to compute the estimator \(\hat{\beta}\) :

We will discuss cases in which this condition is not met in the next article.

Graphically, this projection states that we project \(\hat{Y}\) onto the hyperplane formed by the columns of X. 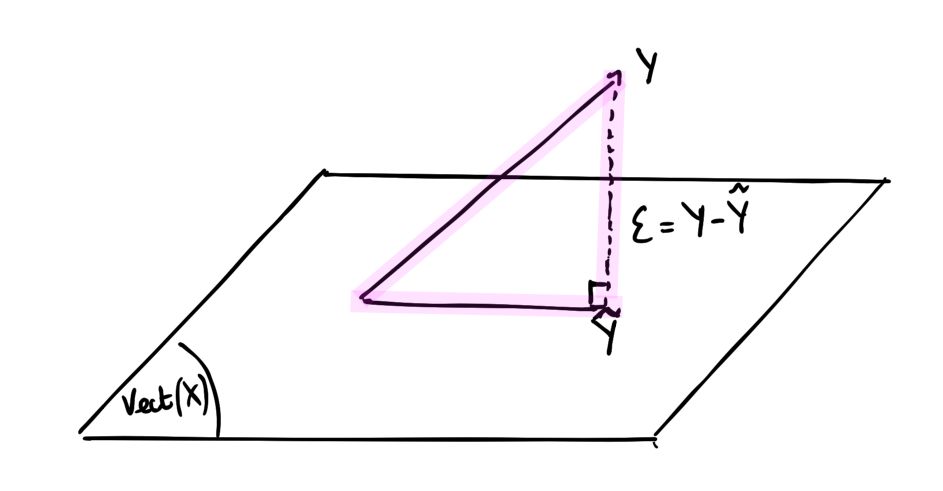 Bias and Variance of the parameters

Something pretty interesting happens here: by adding a new variable to the model, the coefficient of \({\beta}_1\) quite logically changed but became non-significant. We do expect \({\beta}_2\) to explain the model way better now.