In this article, we’ll introduce the key concepts related to time series.

We’ll be using the same data set as in the previous article: Open Power System Data (OPSD) for Germany. The data can be downloaded here

Start by importing the following packages :

Then, load the data : 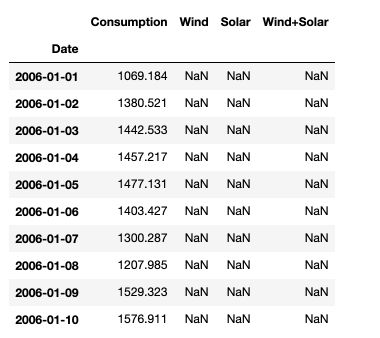 Then, make sure to transform the dates into datetime format in pandas :

I. Key concepts and definitions 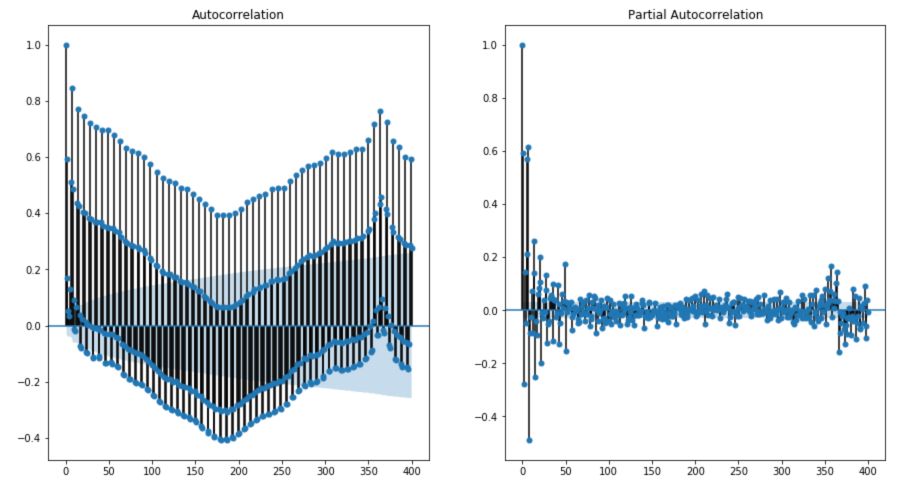 The partial autocorrelation function (PACF) gives the partial correlation of a stationary time series with its own lagged values, regressed the values of the time series at all shorter lags. It is a regression of the series against its past lags.

How can we correct auto-correlation ? Take for example :

Therefore, if you substract the first to the second with a coefficient equal to the auto-correlation \(\rho\) :

Therefore, if we want to make a regression without auto-correlation :

Why would we want to remove the auto-correlation?

Stationarity of a time series is a desired property, reached when the joint distribution of \(y_s, y_{s+1}, y_{s+2}...\) does not depend on \(s\). In other words, the future and the present should be quite similar. Stationary time series do therefore not have underlying trends or seasonal effect.

What kind of events makes a series non-stationary?

We usually want our series to be stationary even before applying any predictive model!

How can we test if a time series is stationary?

Let’s cover into more details the Dickey-Fuller test. To do so, we need to introduce the notion of unit root. A unit root is a stochastic trend in a time series, sometimes called a random walk with drift. If a series has a unit root, it makes it unpredictable due to a systematic pattern.

Let’s consider an autoregressive (we’ll dive deeper later in to this) :

We define the characteristic equation as :

If a process has a unit root, then it is non-stationary, i.e the moments of the process depend on \(t\).

A process is a weakly dependent process, also called integrated of order 0 ( \(I(0)\) ) if taking the first different of the model is enough to make the series stationary :

The Dicker Fuller test is used to assess if a unit root is present in an autoregressive process :

In practice, we consider the following equation :

The Augmented Dickey-Fuller Test (ADF) is an augmented version of the Dickey-Fuller test in the sense that it can test for a more complex set of time series models. For example, consider an ADF on an AR(p) process :

Exogeneity describes the relation between the residuals and the explanatory variables. The exogeneity is said to be strict if :

The exogenity is said to be contemporary when :

We can test the Granger causality using a Fisher test :

Conclusion : I hope you found this article useful. Don’t hesitate to drop a comment if you have a question.