We have so far formulated the Bellman Equation, but we did not cover ways to solve it. In this article, we will explore Dynamic Programming, and more specifically:

Dynamic Programming is a very general solution method for problems which have two properties :

Markov Decision Processes satisfy both of these properties. The Bellman equation gives a recursive decomposition. The values function stores and reuses solutions.

Dynamic Programming assumes full knowledge of the MDP. We know the dynamics and the reward. It is used for planning in an MDP, and it’s not a full Reinforcement Learning problem.

Dynamic Programming is used in :

If we are given an MDP and a policy (e.g always go straight ahead), how can we evaluate this policy \(\pi\) ?

We use synchronous backups :

The convergence of this process can also be proven.

We can represent Policy Evaluation graphically as in the previous article : 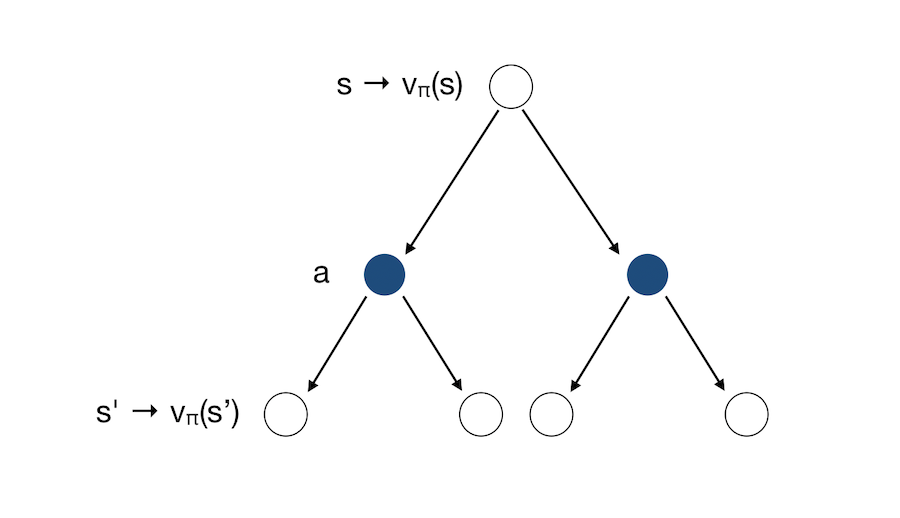 Which can be re-written under matrix form : 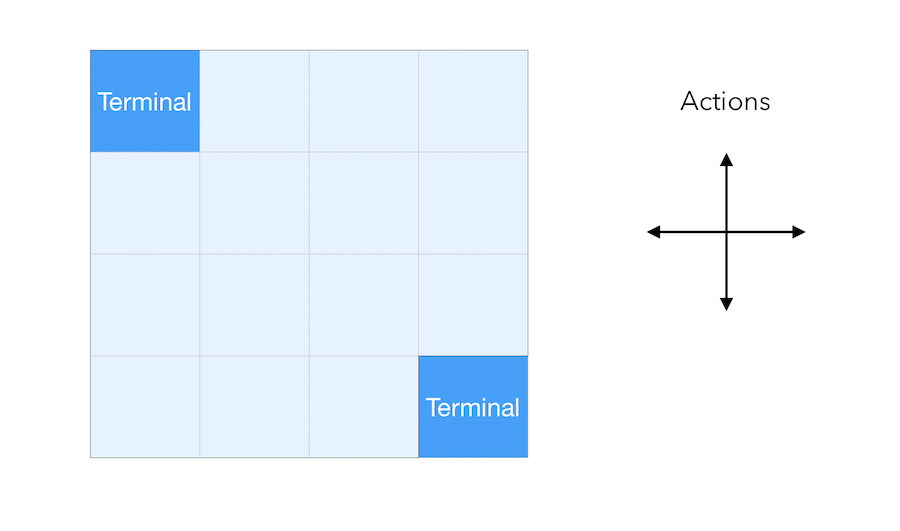 We suppose that the agent follows a uniform random policy, and has \(\frac{1}{4}\) chance to pick each action (Up, Down, Left, Right) : 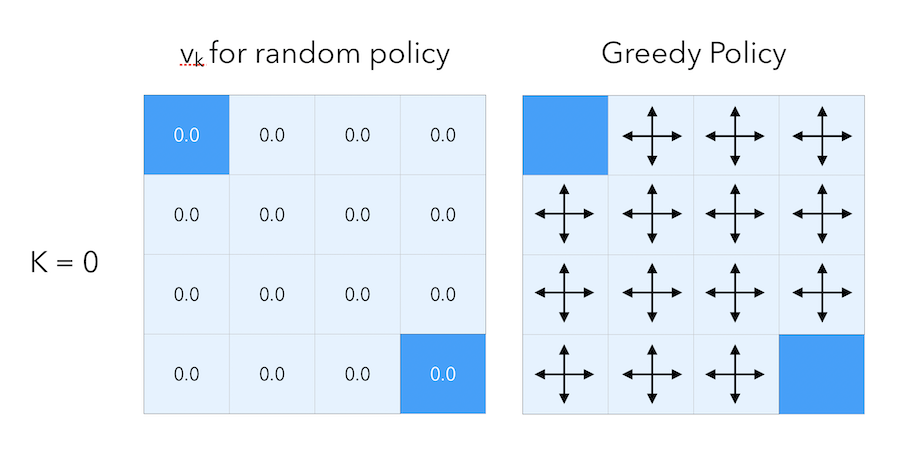 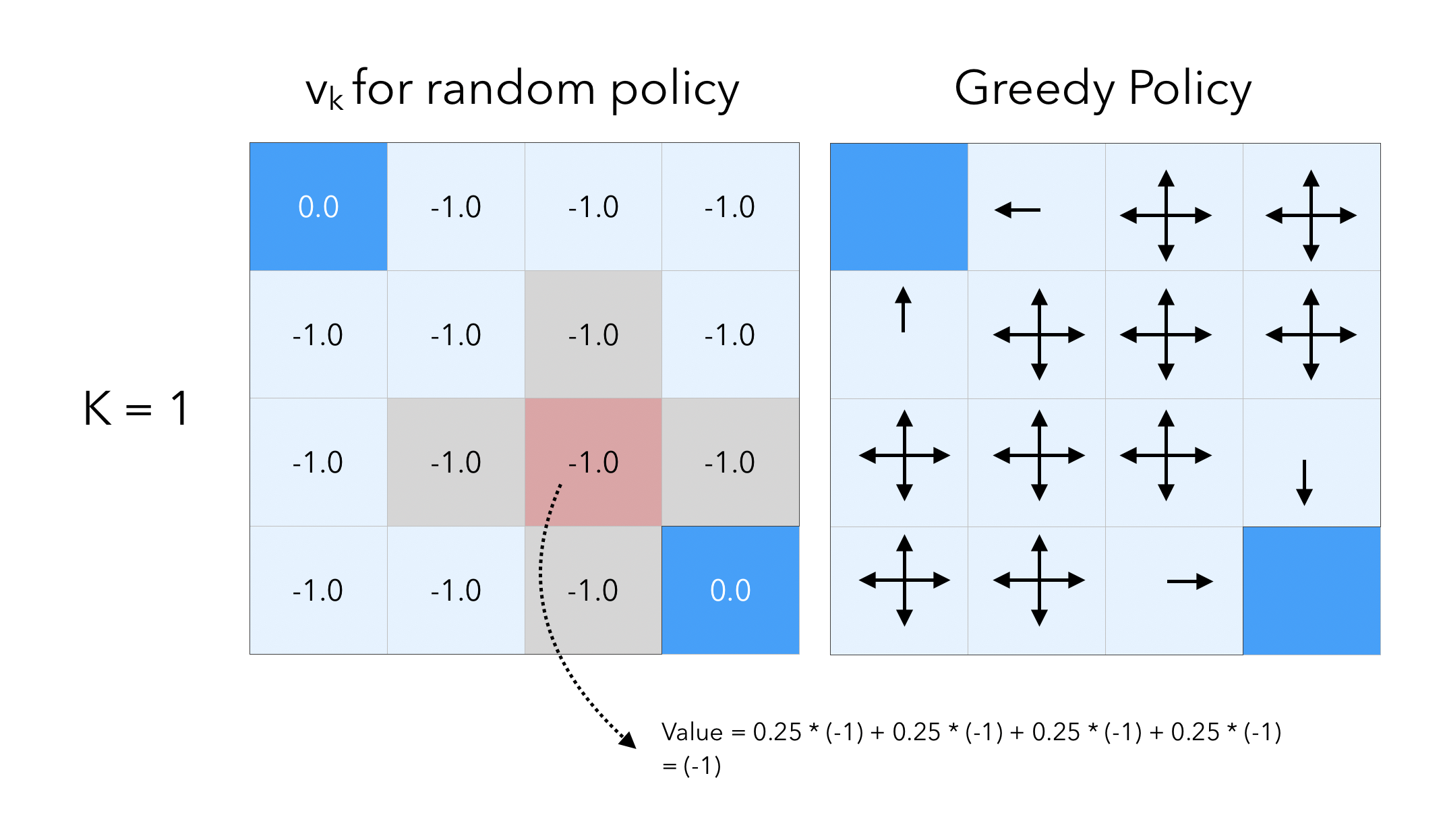 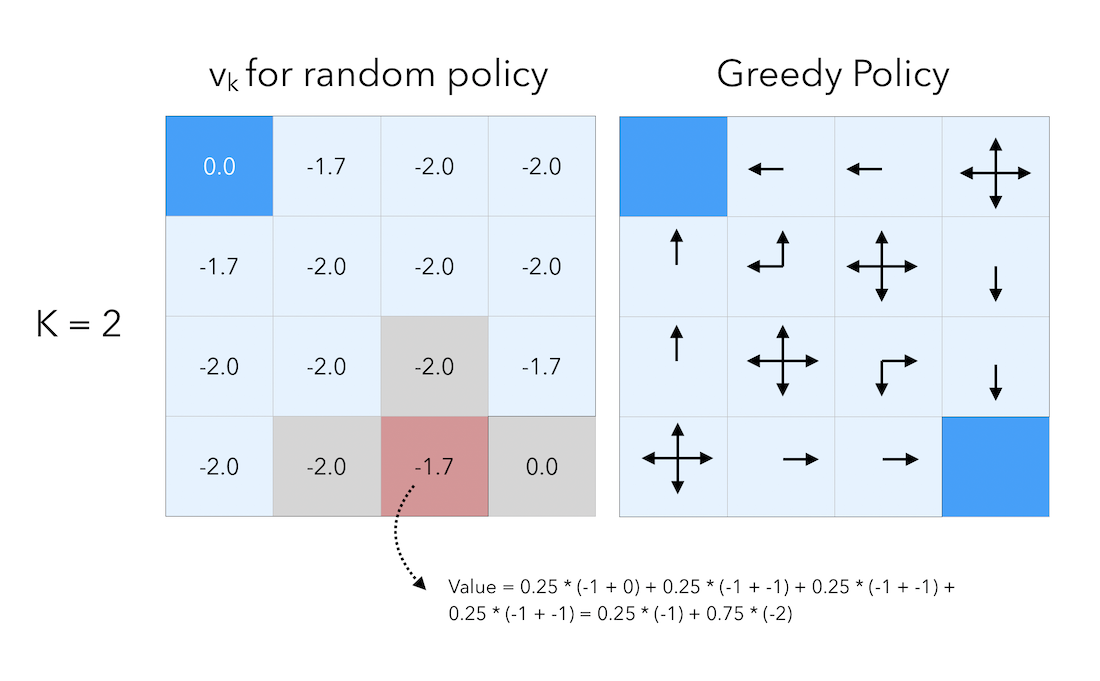 We still get the immediate reward of \(-1\) for moving, but we add to this amount the value of the cell at the previous step. Threfore, by following this principle by which we add the celle value to the reward we get, when we moved from step 0 to step 1, the value of the cells right next to a terminal state is given by: 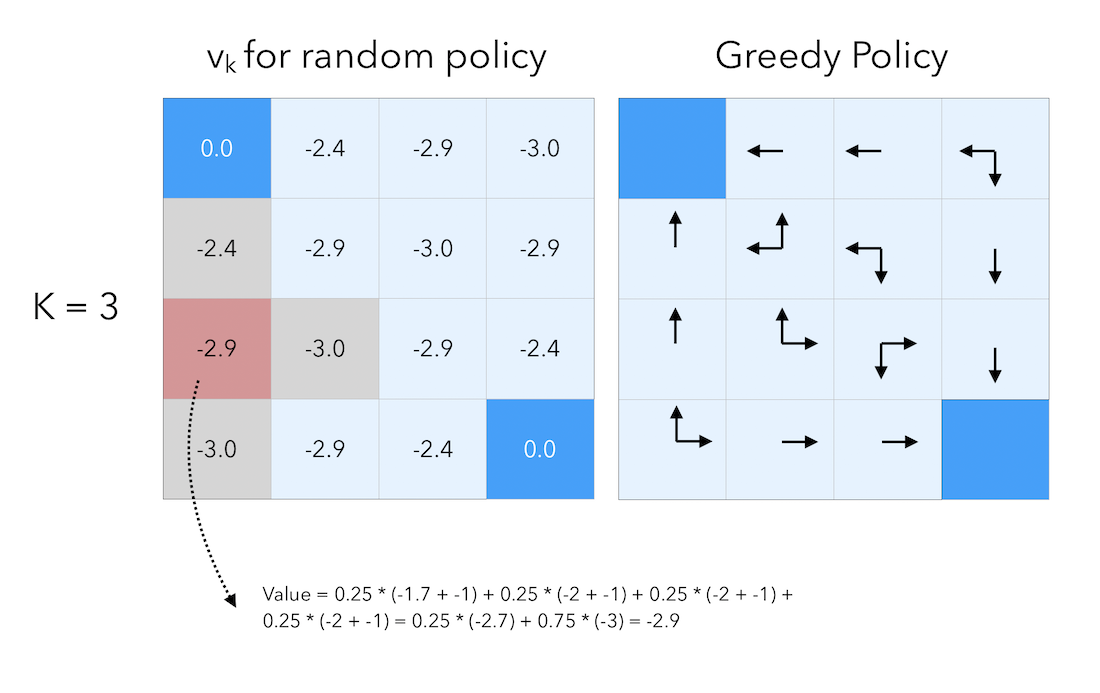 At that point, we have reached the optimal policy. There is no longer need to iterate.

We now have a way to find the value of a given policy iteratively. How do we then identify the optimal policy ?

The greedy part means that we systematically optimize over the next action by taking into account what will happen if we take this action.

In general, we need a lot of improvements and evaluations. This process of policy iteration always converges to \(\pi^{*}\).

The process can be represented as such : 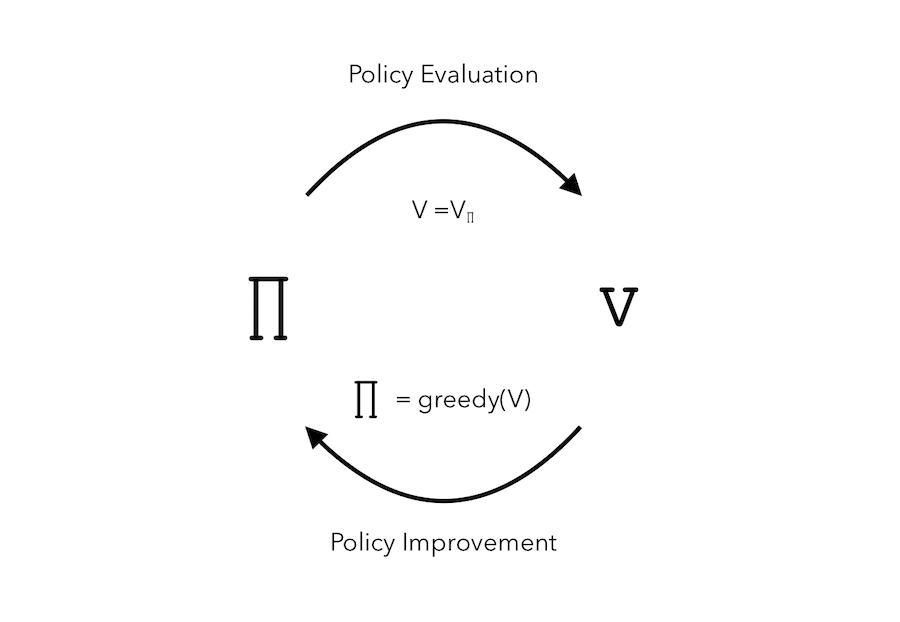 This improves the value from any state \(s\) over one step (at lease) :

Therefore, the value function is improved over time :

What if the improvements stop, i.e :

Have we reached the optimal state? Or a we stuck? We actually satisfy the Bellman optimality equation :

Policy iteration solves MDPs. If the iteration ever stops, it means that the optimal policy has been identified.

Sometimes, we do not need the policy iteration to converge to \(v_{\pi}\) exactly, since this process might be really long. We can therefore :

The idea of value iteration is to apply these updates iteratively.

We start with the final rewardds, and work backwards. Suppose that we work on a small gridworld again, where our goal is to reach the blue top-left corner. 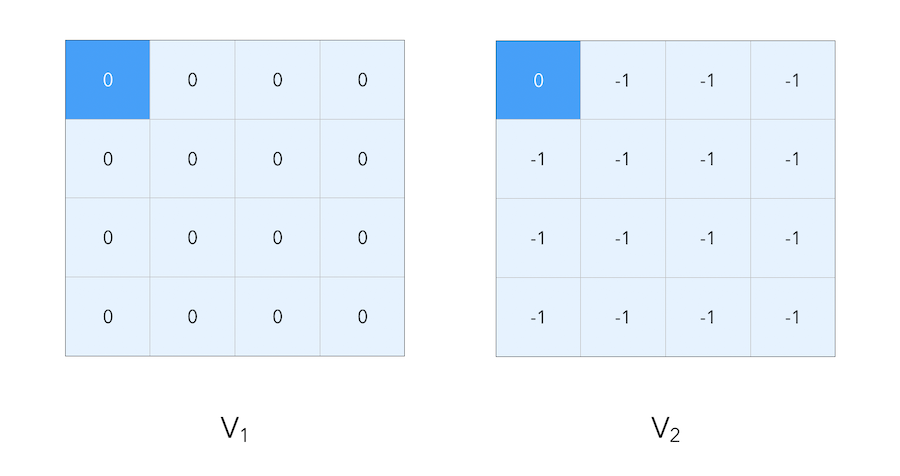 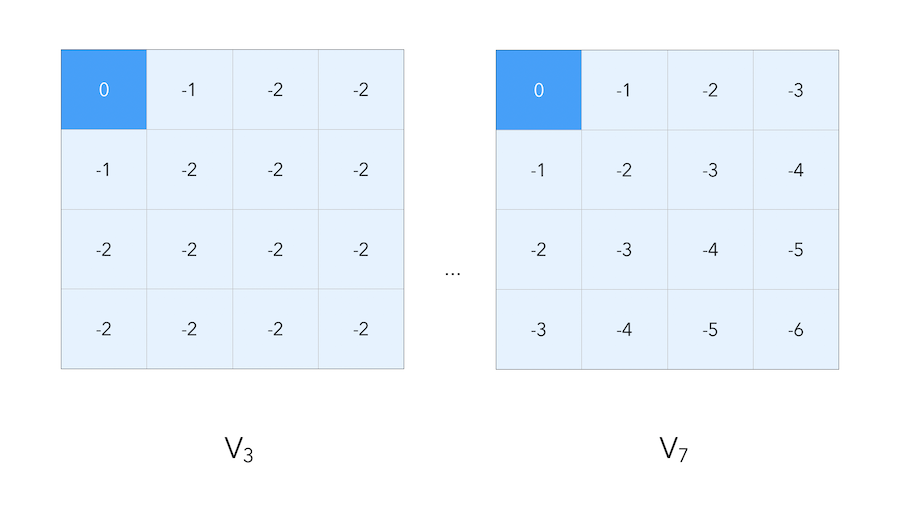 It relies on synchronous backups :