I was recently recommended to take a look at David Silver’s (from DeepMind) YouTube series on Reinforcement Learning. The whole course (10 videos) can be found here.

In this series, I am going to :

Reinforcement Learning is at the intersection of many fields of science :

How is RL different from other ML paraddigms ?

Where is RL applied ?

Here is a simulation environment in which we trained an agent to run :

A reward \(R_t\) is a feedback value. In indicates how well the agent is doing at step \(t\). The job of the agent is to maximize the cumulative reward.

Reward Hypothesis : All goals can be described by the maximisation of expected cumulative reward.

The reward might be at the end of the whole process, or at each step, depending on the type of problem we consider.

This is a Sequential Decision Making process. We select actions to maximise the total future reward.

Actions can have long term consequences, and the reward might be delayed. It may be better to sacrifice immediate reward to gain more long-term reward.

It can be represented in the following way : 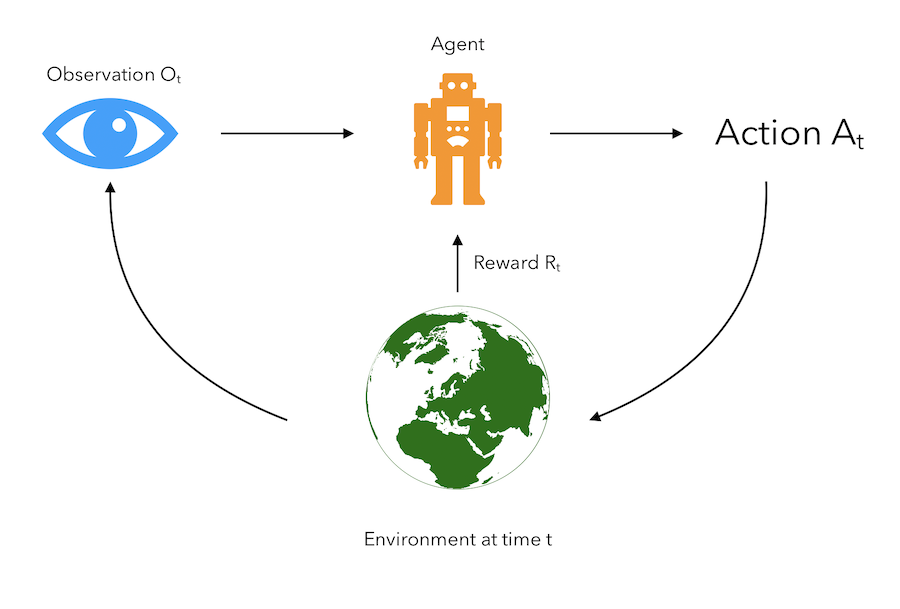 The only leverage the agent has on its environment and the reward it gets is the action it takes.

What happens next depends on this history. Our aim is simply to find the right action to take based on the history.

We don’t always use the whole history. Instead, we use the state. It is the information that is used to determine what happens next. It captures all necessary information, and is a function of the history.

If you want to go from A to B, to decide where to turn, you don’t need a map of the whole world, but simply things that are relevant around you. This is the idea behind environment state. 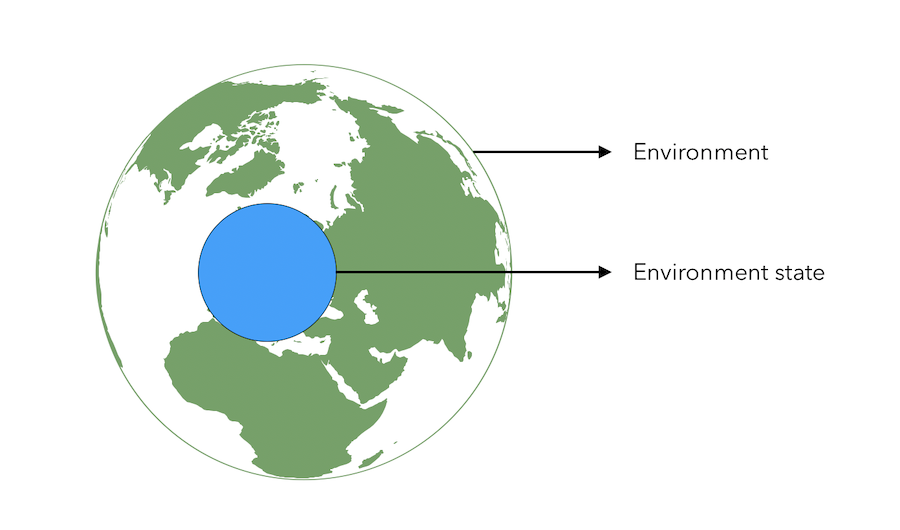 The agent state \(S_t^a\) is the agent’s internal representation. It is all the information used by the agent to take the action. It is a function of the history : \(S_t^a = f(H_t)\) 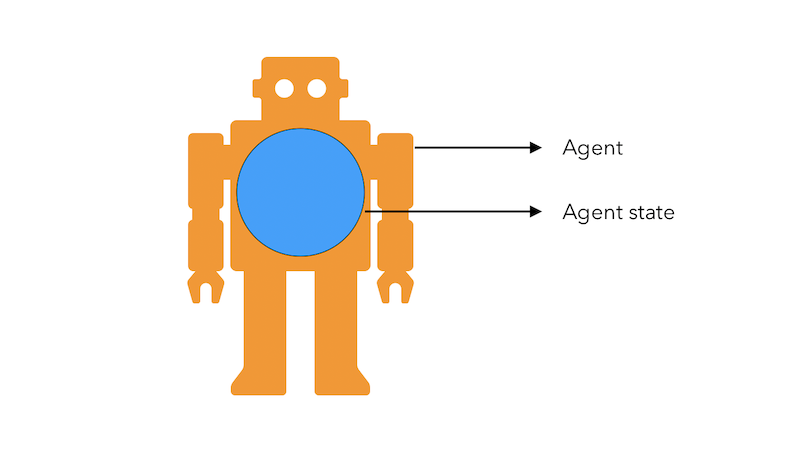 Once a state is known, the history may be thrown away. The current state is a sufficient statistic of the future. The environment state \(S_t^e\) is Markov. The history \(H_t\) is Markov.

A fully observable environment is an environment in which the agent directly observes the environment state : \(O_t = S_t^a = S_t^e\). This is a Markov Decision Process (MDP).

A partially observed environment is an environment in which the agent indirectly observes the environment. This could be the casr for a robot with limited vision, a trading agent that only knows the current prices… This is called a Partially Observed Markov Decision Process (POMDP). The agent must then construct its own state representation \(S_t^a\), either by :

An RL agent includes one or more of these components :

To illustrate those concepts, suppose that we are facing a really simple maze and want to go from the start position to the end by shifting by at most 1 square each time. 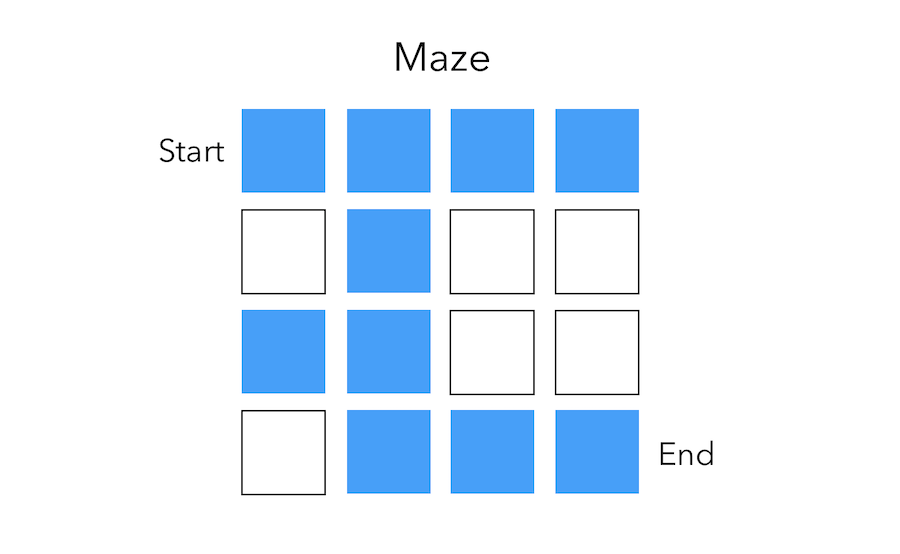 The policy is the agent’s behavior. It maps the state to the action. The policy can be : 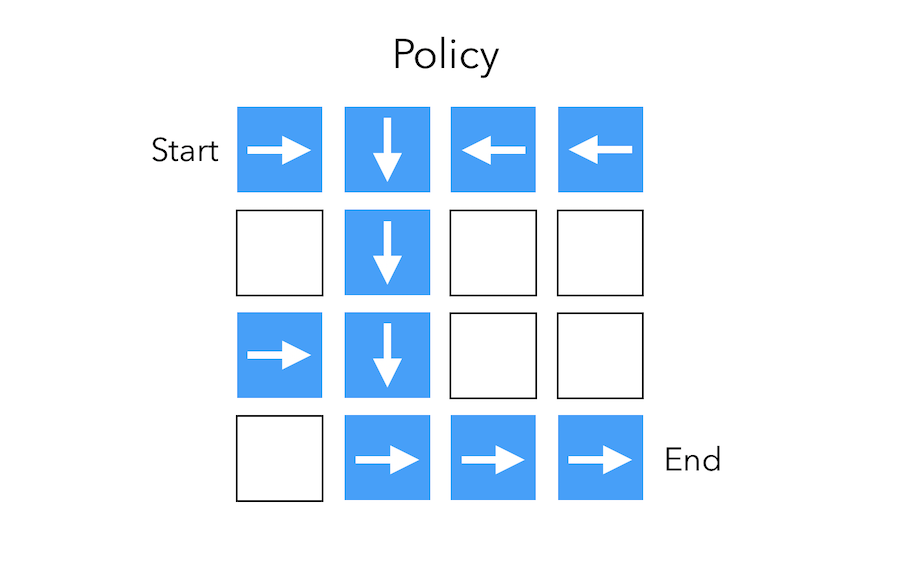 The value function is a prediction of expected future reward. It depends on the way we are behaving, and therefore on \(\pi\).

The value function for a policy gives us the total reward we expect by selecting this policy. It is the sum of the discounted rewards associated to a specific policy.

For example, in the maze example, we could attach the value -1 to the goal, and remove 1 at each step. Some paths as the upper right one are therefore not optimal since the value diminishes. 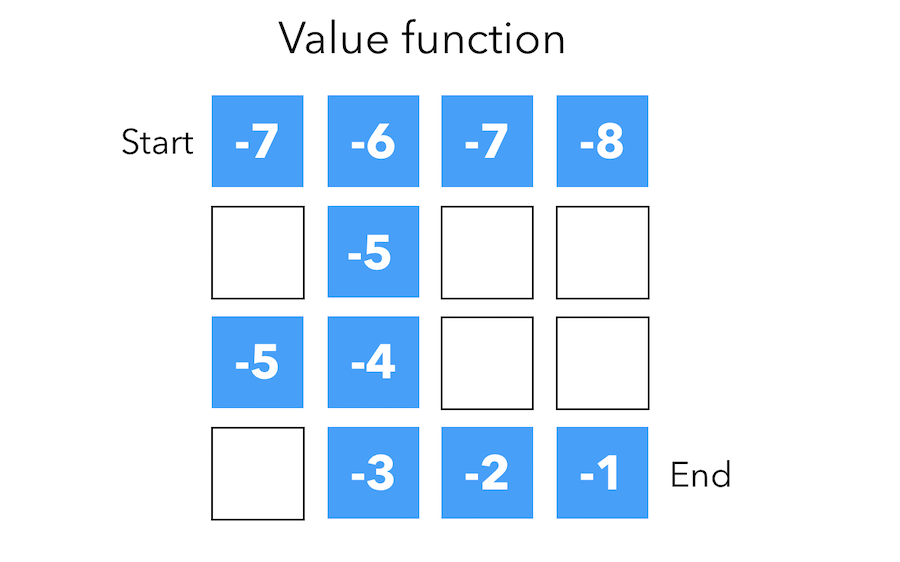 A model predicts what the environment will do next. The transitions \(P\) predicts the next state.

The rewards \(R\) predicts the next reward : 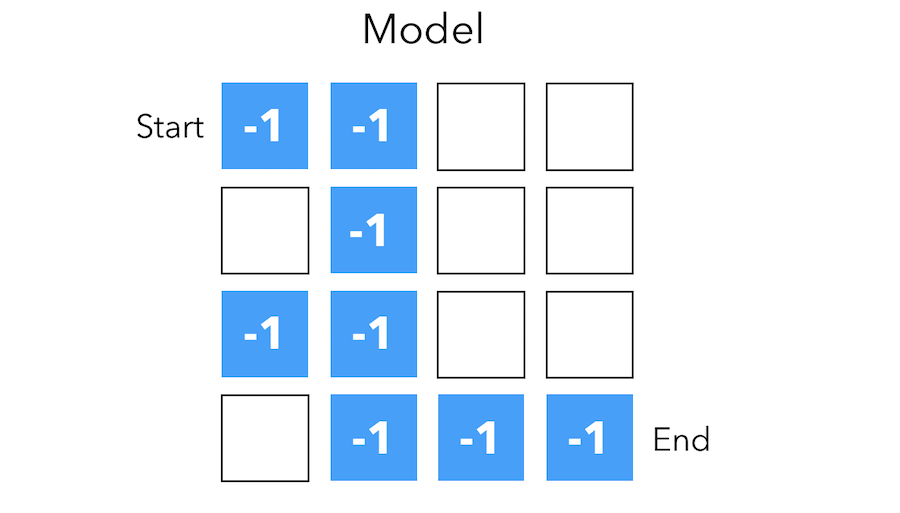 The grid layout represents transition model \(P_{ss'}^a\). The numbers represent immediate reward \(R_s^a\) from each state (same for all action). This is a 1 step prediction of the reward, and describes what the agent understood of the environment.

The reward can however be different for each action.

There is not always a model in the environment. In such case, we talk of model-free environments.

There are 2 fundamental problems in sequential decision making :

Planning can be seen as a tree-based search to find the optimal policy.

Reinforcement Learning is a trial and error learning problem. The agent should discover a good policy wthout losing too much reward.

An RL agent must balance between Exploration and Exploitation.