So far, we considered the HMM training under the Maximum Likelihood Estimate (MLE). But the MLE is only optimal under certain model correctness assumptions: Observations should be conditionally independent given the hidden state, which is not the case if states are phone based for example.

The MLE identifies the best set of parameters to maximize the objective function:

Then, in an HMM-GMM for example, we define the mean vector \(\mu_{jm}\) for the mth Gaussian component in the jth state as:

Where \(\gamma_{jm}^u(t)\) is the probability of being in mixture m at state j at time t given training sentence u.

Therefore, we can re-write the mean vector as:

This sections applies for HMM-GMM architectures.

The MMIE aims to directly maximize the posterior probability.

We can then decompose it into an acoustic and a language model:

We optimise \(F_{MMIE}\) by making the correct word sequence likely (numerator goes up), and the other word sequences unlikely (denominators goes down).

The optimization is done using an Extended Baum-Welch algorithm (EBW), and the new mean update equation is given by:

A word lattice is a directed acyclic graph with a single start point and edges labeled with a word and weight. It’s usually represented as a WFSTs, and allow you to only explore possible paths for word sequences rather than all combinations. Pruning in that WFST is also possible.

We can also adjust the optimization criterion so that it’s directly related to the Word Error Rate in a method called Minimum Phone Error.

It’s a weighted average over all possible sentences \(w\) of the raw phone accuracy, and finds probable sentences with low phone error rates.

So far, we saw what could be applied for HMM-GMM architectures. DNNs are trained in a discriminative manner, since the cross entropy (CE) with a softmax pushes the correct label and pulls down the competing labels. But can we train DNN systems with an MMI objective function?

Yes, we can, and this is usually done the following way:

The results of various approaches on the Switchboard dataset are presented below:

The aim of Lattice-Free MMI is to avoid the need to pre-compute lattices for the denominator, and the need to train using frame-based Cross Entropy before sequence training.

Lattice-free MMI is basically made of a few tips: 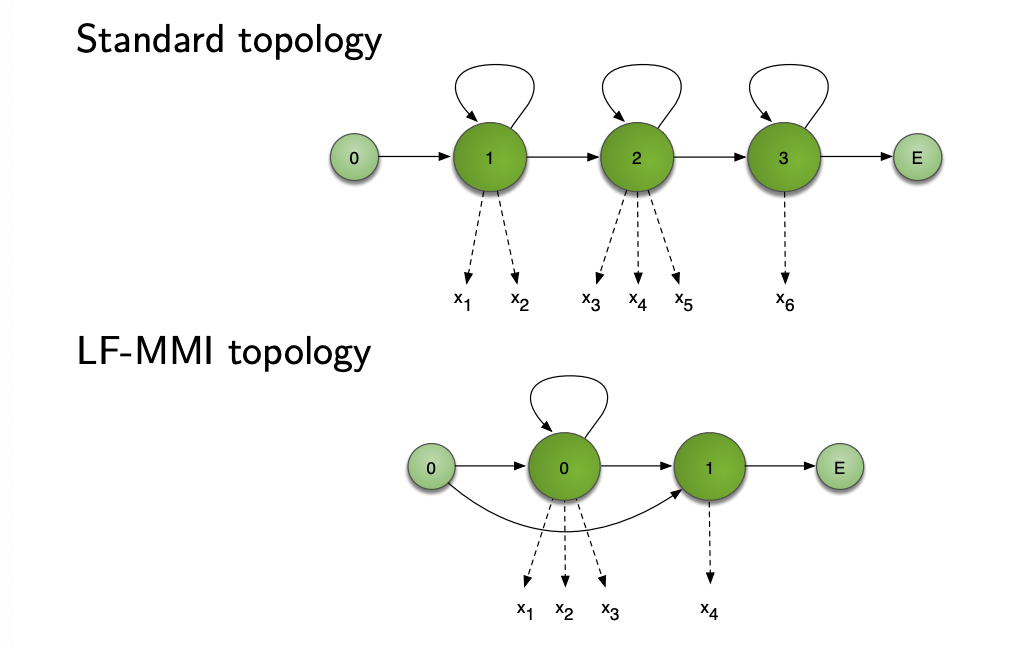 Regularisation is also used, by using standard CE objective as a secondary task. All layers but the final are then shared between tasks.

We also apply L2 regularisation on the main output.

LF-MMI is faster to train and decode and achieves better WER. It however performs worse when training transcripts are unreliable.

As a summary, we usually intialise sequence discriminative training: