When training an ASR system, mismatch can occur between training and test data, due to various sources of variation. Speaker adaptation can help fill this gap.

Lots of speaker-specific variations exist in the acoustic model:

There are also variations not related to the speaker itself, but to the channel (telephone, distance to microphone, reverberation…).

Each speaker has a specific way to pronounce some words.

Test data might be related to a specific topic, or to user-specific documents. The language model should then be adapted.

To handle all of these potential variations, we perform speaker adaptation. The aim is to reduce the mismatch between test data and trained models.

ASR Systems can be said to be:

It can also be:

Finally, we want SA to be:

We can adapt the parameters of acoustic models to better match the observed data, using:

MAP training will balance the estimated parameters of the Speaker Independent data and the new adaptation data.

Where \(\gamma_{jm}\) is the component occupation probability. The aim of a MLE is to maximize: \(P(X \mid \lambda)\) where \(\lambda\) are the model parameters.

It gives a new mean:

As the amount of training data increases, the MAP estimate converges to the ML one.

As its name suggests, MLLR will apply a linear transformation on the Gaussian parameters estimated by MLE:

It can be re-written as:

We then estimate \(W\) to maximize the MLE on the adaptation data. Such transformations can then be applied to all classes, or to a set of Gaussian sharing a transform, called a regression class.

As usual in MLE, we maximize the log-likelihood (LL), which turns out to be easier to solve. The LL is defined as:

We apply the mean-only MLLR, by adapting only the mean, and it usually improves WER by 10-15% (relative). 1 minute of adaptation speech is more or less equal, in terms of model performance, to 30 minutes of speech in speaker dependent models.

In constrained MLLR (cMLLR), we use the the same linear transform for both the mean and the covariance. This is also called feature space MLLR (fMLLR), since it’s equivalent to applying a linear transform to the data:

There are no closed form solution, this is solved iteratively.

In SAT, we adapt the base models to the training speaker while training, using MLLR or fMLLR for each training speaker. It results in higher training likelihoods and improved recognition results, but increases the complexity and the storage requirements. SAT can be seen as a type of speaker normalization at training time.

We can use the HMM/GMM system that we train to estimate the tied state, to also estimate a single cMLLR transform for a given speaker. We then use this to transform the input speech of the DNN for the target speaker. 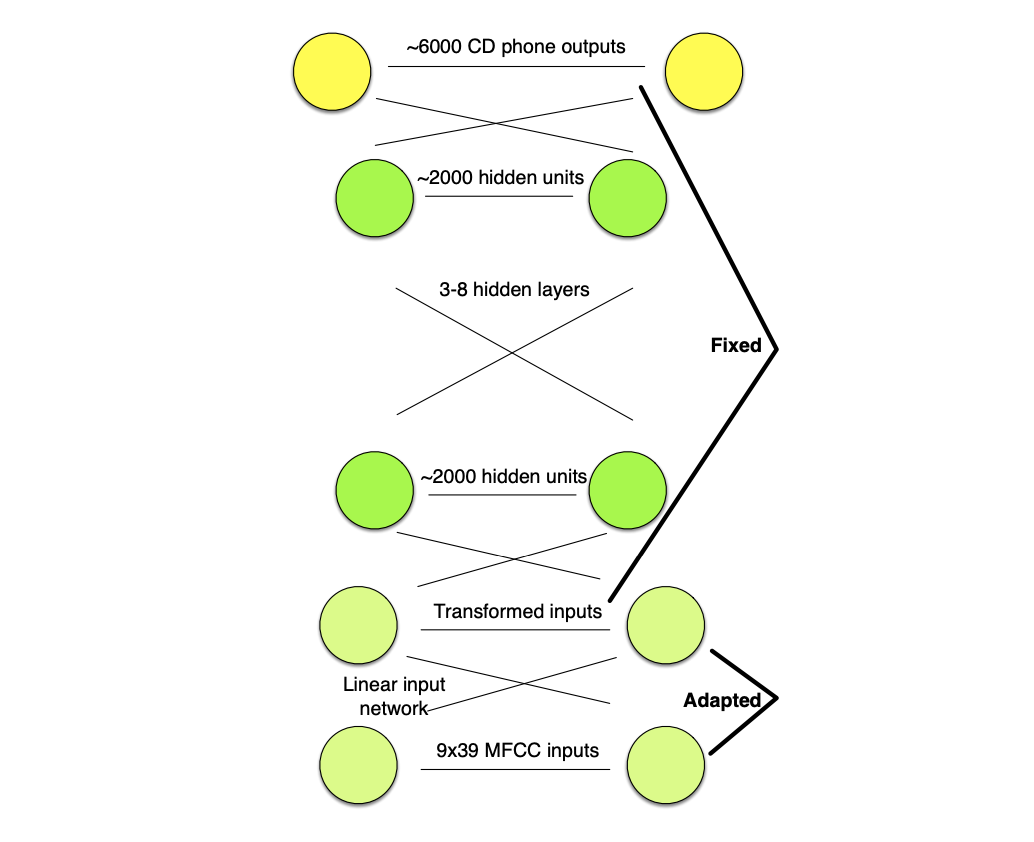 In training, the LIN is fixed and in testing, the main speaker-independent network is fixed.

We can also learn a short speaker code vector for talker, and combine that with the input feature vector, to compute transformed features. This allows an adaptation on speaker specific means. 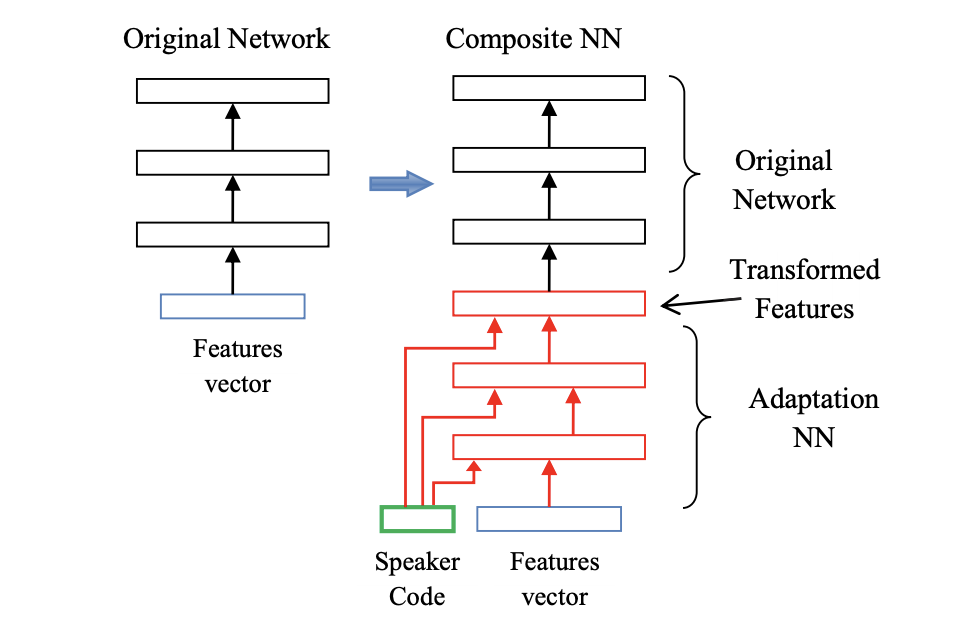 i-vectors are used as speaker codes. i-vectors are fixed-dimensional representations \(\lambda_s\) for a speaker \(s\). They model the difference between the means trained on all data \(\mu_0\) and the speaker specific means \(\mu_s\):

i-vectors are derived from a factor analysis, and widely used in speaker identification.

In LHUC, we add a learnable speaker dependent amplitude to each hidden unit, which allows us to learn amplitudes from data, per speaker, and it “embeds” in a sense the adaptation part.

Below are the results, in terms of WER, of various adaptation methods, and their combinations.