Acoustic modeling allows you to identify phonemes and transitions between them. But we still miss a step to return proper words: a language model that helps identify the correct words.

This is known as the “Fundamental Equation of Statistical Speech Processing”. Using Bayes Rule, we can rewrite is as :

In continuous speech recogniton, the number of words in the utterance is not known. Word boundaries are not known. We therefore need to add transitions between all word-final and word-initial states. 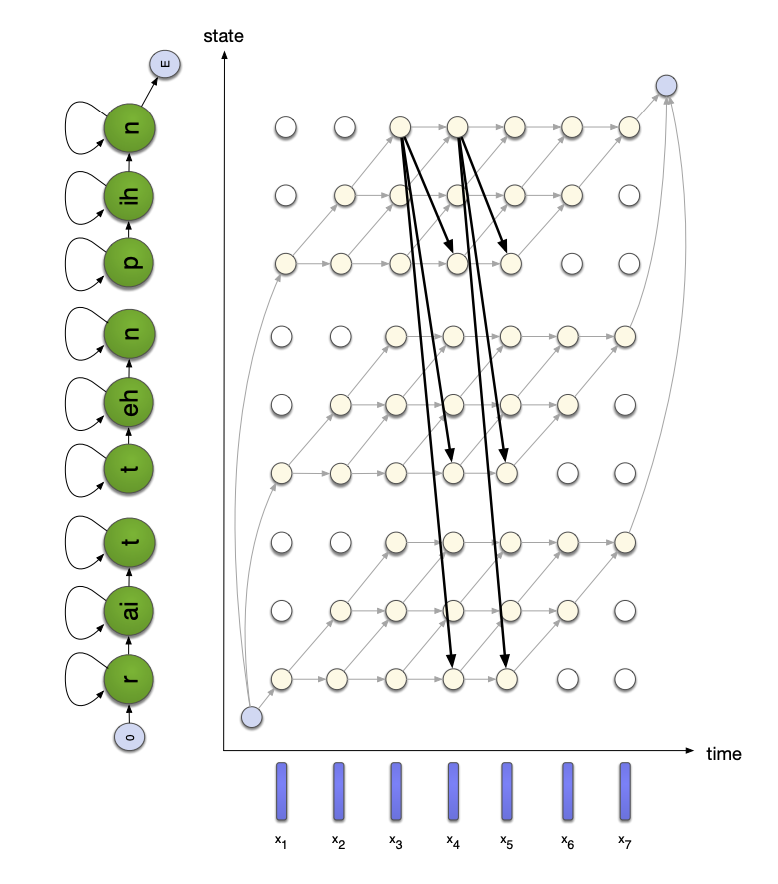 If we then apply Viterbi decoding to find the optimal word sequence, we need to consider \({\mid V \mid}^2\) inter-word transitions at every time step, where \(V\) is the number of words in the vocabulary. Needless to say, it can become a problem that is way too long to compute. However, if the HMM models are simples and the size of the vocabulary is small, we can decode the Markov Chain exactly with the Viterbi decoding.

So the question becomes: can we speed up the Viterbi search of the best sequence using some kind of information? And the answer is yes, using the Language Model (LM). 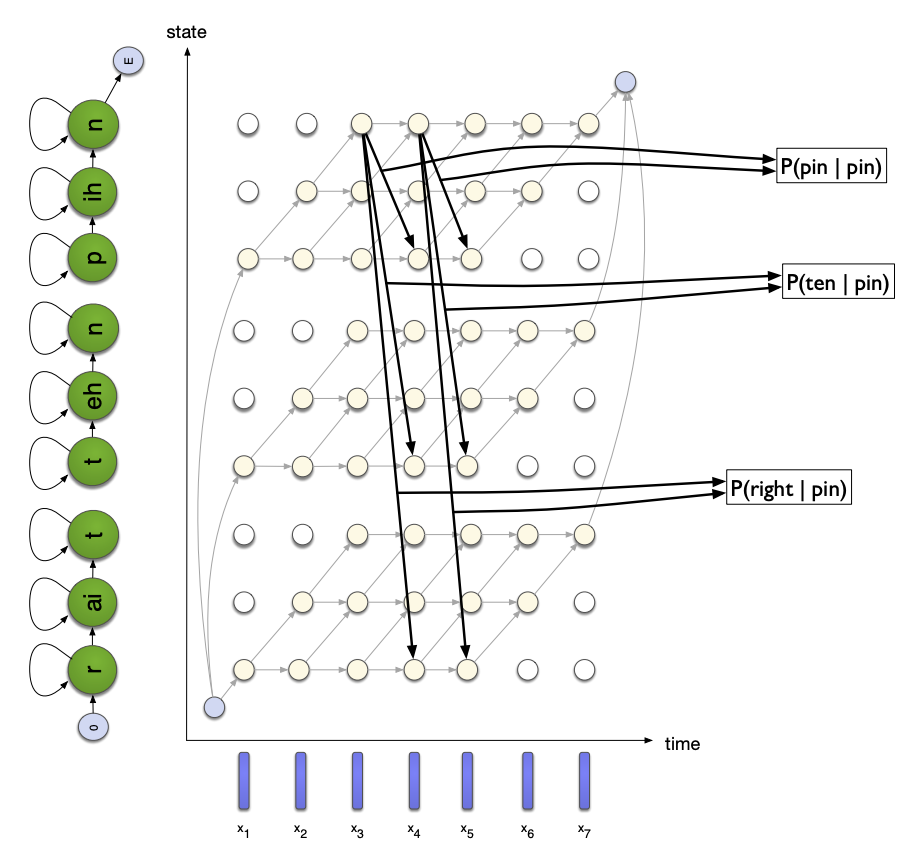 However, the exact search is not possible for large vocabulary tasks, especially in the case of the use of cross-words. There are several solutions to this:

In tree-structured lexicons, we represent the possible words of a language in a tree, nodes being phones, and leaves being words. Therefore, when we have a sequence of phones, we only need to follow the corresponding branch of the tree, which greatly reduces the number of state transition computations : 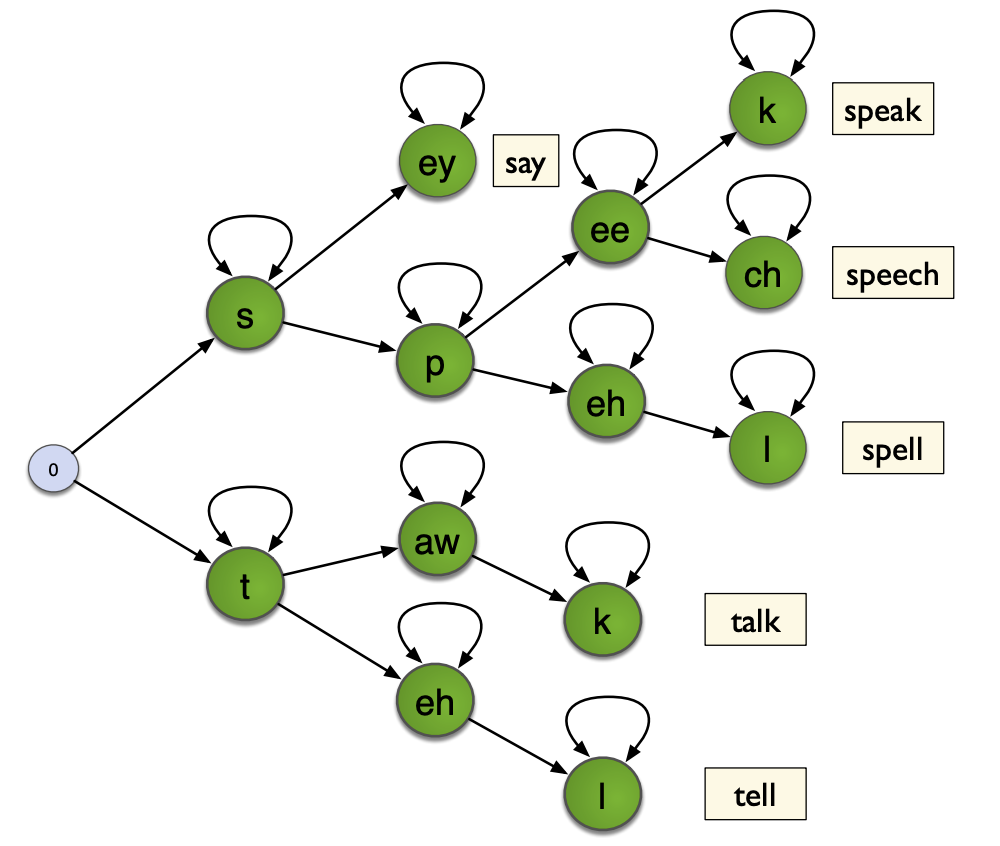 In a tree-structured decoding, we look ahead to find the best LM scores for any words further down the tree, and states are pruned early if they lead to a low probability. This makes the decoding faster, since many branches are dropped.

Let’s get back to the basics.

Finite State Automata (FSA) are extensively used in Speech. We define them as an abstract machine consisting of:

You migh recognize here a more generic definition of Hidden Markov Models (HMMs). HMMs are in fact a sub-base of Stochastic FSAs. A path in FSA is a series of directed edges.

Let us conside the language of a sheep for example: /baa+!/. This language has 5 states:

The state labels are mentioned in the circles, and the labels/symbols are on the arcs. More formally, FSAs are usually presented this way:

In our sheep example, the alphabet is made of 3 letters: b, a and !. It has a start state and an accept / final state, as well as 5 transitions. FSA acts as an Acceptor, in the sense that it can reject a set of strings/sequence:

A string is accepted if:

An additional symbol that has a special meaning in FSAs is \(\epsilon\). It means that no symbol is generated. This is a way to go back to a previous state without generating anything:

Formal languages are just sets of strings, and we can apply set operations on them. There are two main types of operations used on FSA and WFSTs:

Weighted FSA simply introduce a notion of weights on arcs and final states. These weights are also refered as costs. The idea is that is multiple paths have the same string, we take the one with the lowest cost. The cost, on the diagram below, is represented after the “/”.

Weighted FSAs are used in speech, for language modeling or pronunciation modeling:

Finite Automata do no produce an output, whereas Finite State Transducers (FSTs) have both inputs and outputs. Now, on the arcs, the notation is the following:

Why do we need to produce outputs? For decoding ! We can typically take input phonemes and output words.

WFSTs can be composed by matching up inner symbols. In the example below, we match A and B in C, denote it C=A◦B, and since in A the inputs a and b and matched with x, and in b x is matched with y, in C, a and b are matched with y:

There are several algorithms to remember for WFSTs:

The weight pushing process could be illustrated this way: 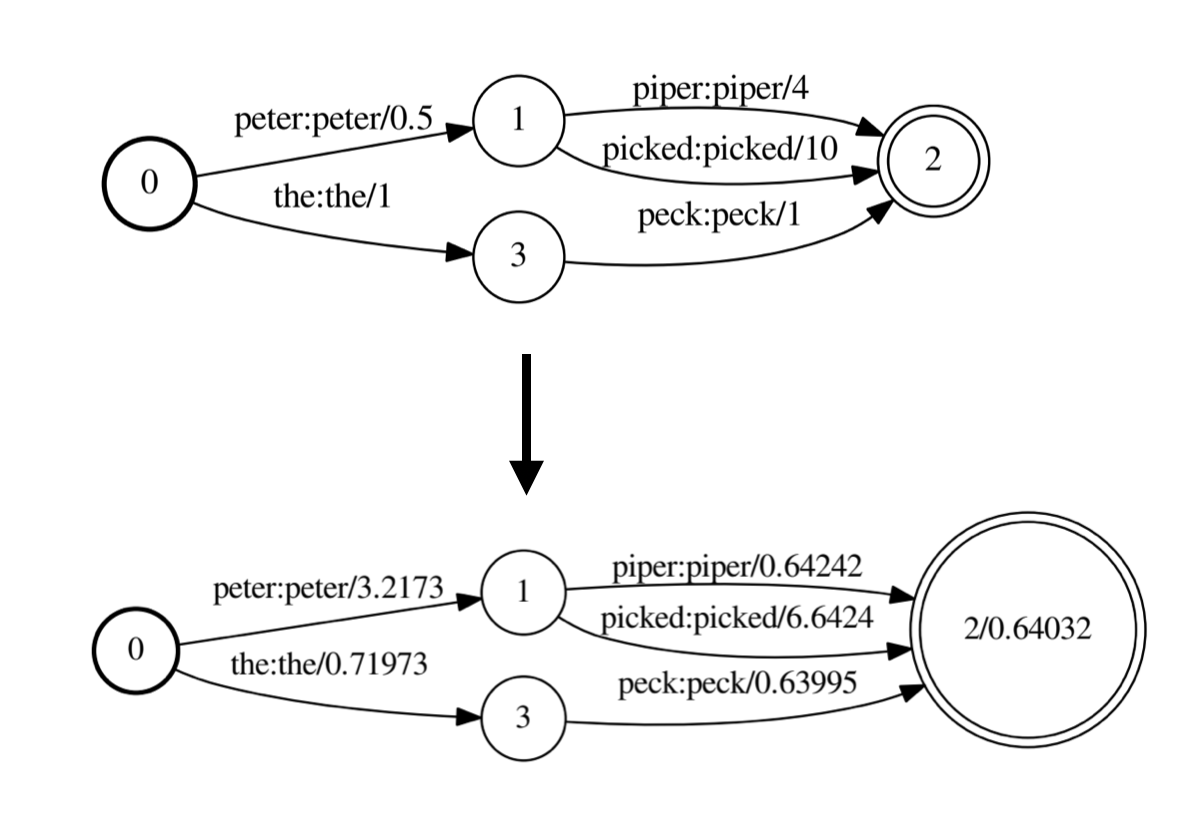 The idea of the decoding network is to represent all components that allow us to find the most likely spoken word sequence using WFSTs:

All the components are built separately and composed together.

HMMs can be represented natively as WFSTs the following way: 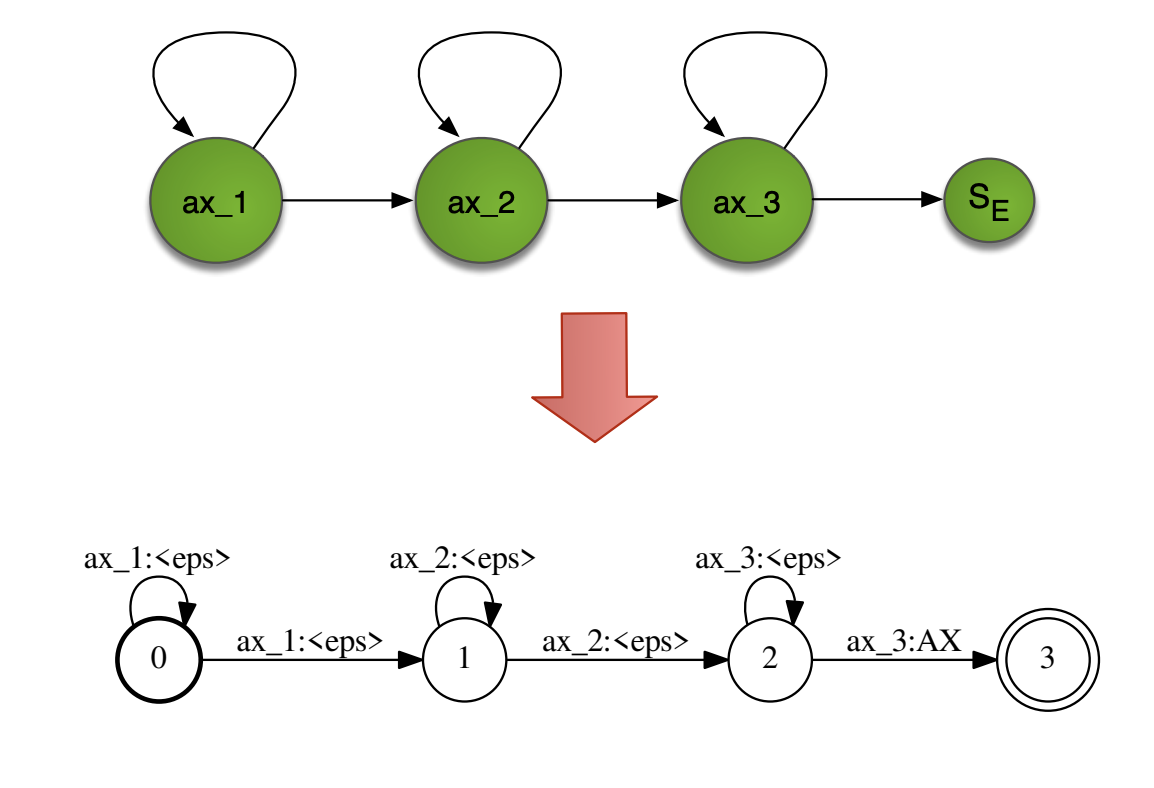 To avoid having too many context-dependent models (\(N^3\)), we apply what was mentioned in the HMM-GMM acoustic modeling: clustering based on a phonetic decision tree.

The Pronunciation lexicon L is a transducer that takes as an input context-independent phones and outputs words. The weights of this WFST are defined by the pronounciation probability.

We can represent language models (LMs) as WFSAs easily too, and any type of LM will actually be implemented as a WFSA in Kaldi or other softwares. They do no produce any output, so they remain Automatas and not Transducers, since our aim is just to estimate the “cost” of a path.

In a unigram LM, the probability of each word only depends on that word’s own probability in the document, so we only have one-state finite automata as units. 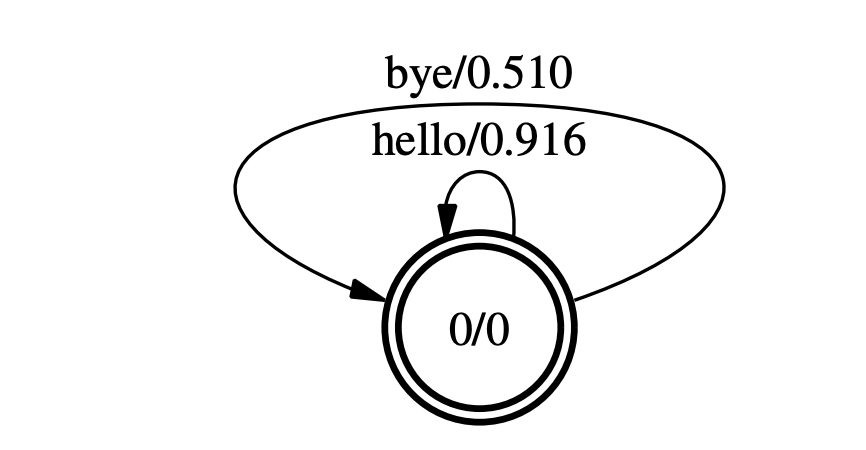 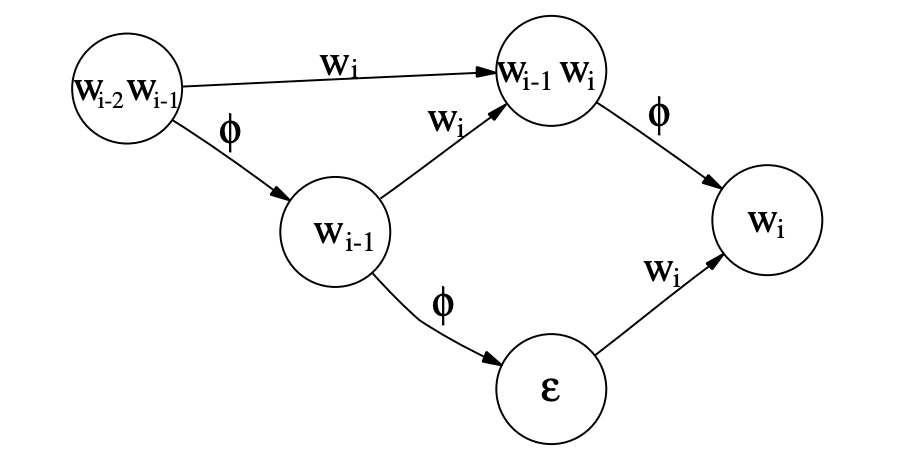 The different components of the deconding graph have now be explicited, and can be more formally defined as: