So far, we have covered HMM-GMM acoustic modeling and some practical issues related to context and less frequent phonemes.

There is an alternative way to build an acoustic model, and it consists in using neural networks to:

Let’s consider a single-layer neural network, that takes as an input an acoustic frame \(X_t\) and outputs phonetic scores \(f(t)\) (one score for each phone). 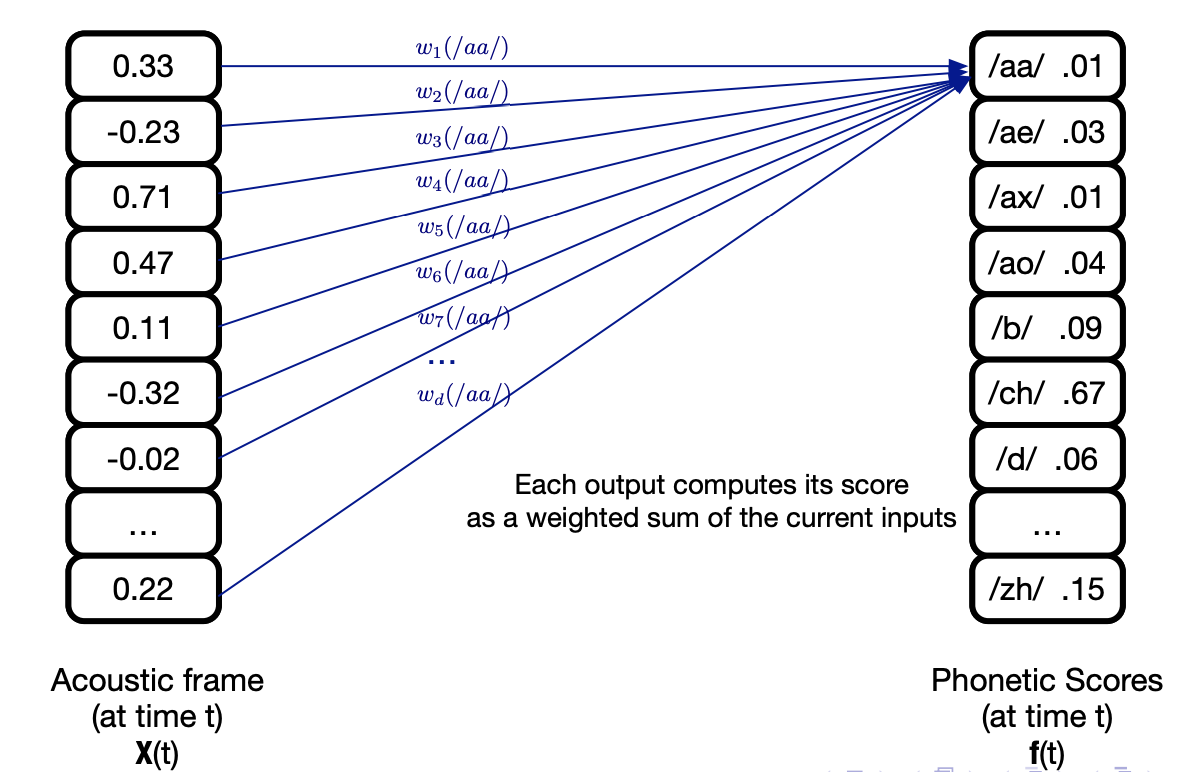 It can be expressed as:

How do we learn the parameters \(W\) and \(b\)? We target the minimization of the error function \(E\), the Mean Square Error (MSE) between the output and the target:

The error minimization is typically done using gradient descent, and we must compute the terms:

The network that predicts phonetic scores is a classifier, so we need to take a softmax to force output values to act as probabilities:

However, the MSE is not the wisest choice when working with probabilities. We can directly maximize the log probability of observing the correct label using the Cross-Entropy (CE) error function:

Using CE, the gradients of the outputs weights simplify to:

There are several extensions possible to this very very simple model:

This looks interesting, and overall simpler than the HMM-GMM. But there is a major limitation, since we cannot do speech recognition with this approach. There are several phone recognition tasks:

Using only DNN, we lack the notion of data segmentation that HMMs are good at doing. But can’t we mix HMMs and DNNs ?

In an HMM-GMM, replacing the GMM by a DNN to estimate output pdfs build a so-called HMM-DNN architecture. In a HMM-DNN, we consider one-state per phone, and train a NN as a phone-state classifier.

It can be shown that the outputs corresponding to class \(j\) given an input \(x_t\) are an estimate of the posterior probability \(P(q_t = j \mid x_t)\), \(q_t\) being a state, because we have softmax outputs and use a CE loss function.

If we want HMM-DNNs to output probabilities, we should scale the likelihoods:

This means we can obtain scaled likelihoods by dividing each network output by the prior, i.e. the relative frequency of class \(j\) in training data.

There are several approaches to continuous speech recognition with HMM-DNN:

The architecture of a HMM-DNN is presented below: 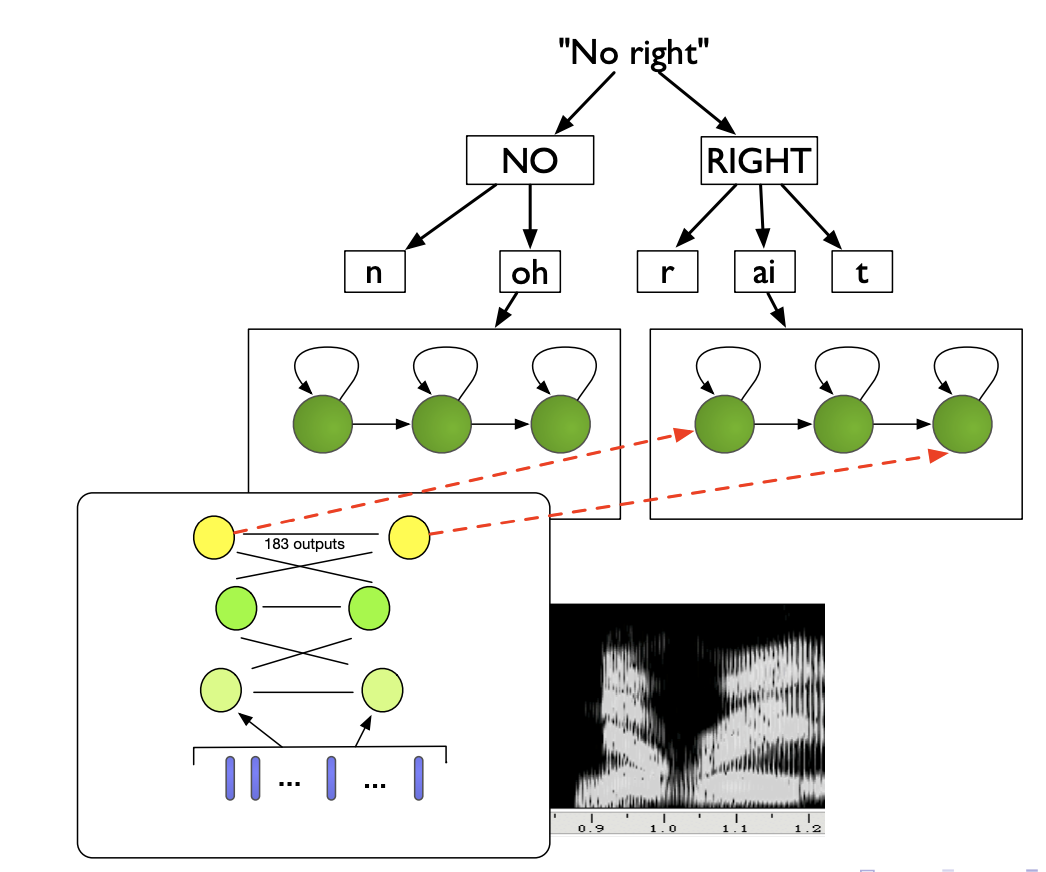 NN are more flexible, learn richer representations and handle correlated features. In terms of speech features, experiments indicate that mel-scaled filter bank features (FBANK) work better than MFCCs, and results in better clustering when applying t-SNE on the hidden layers. Indeed, in FBANK the useful information is distributed over all the features, whereas in MFCC it is concentrated in the first few.

Modling the phonetic context with DNNs was considered hard until 2011, but a simple solution emerged: use the state-tying process from a GMM system, and train a HMM-DNN on it.

Concretely, we model the acoustic context by including neighbour frames in the input layer.

We use richer Neural Network models for acoustic context:

In TDNNs, higher hidden layers take input from a larger acoustic context, and lower hidden layers from narrower contexts. TDNNs can be seen as a 1D convolutional network. 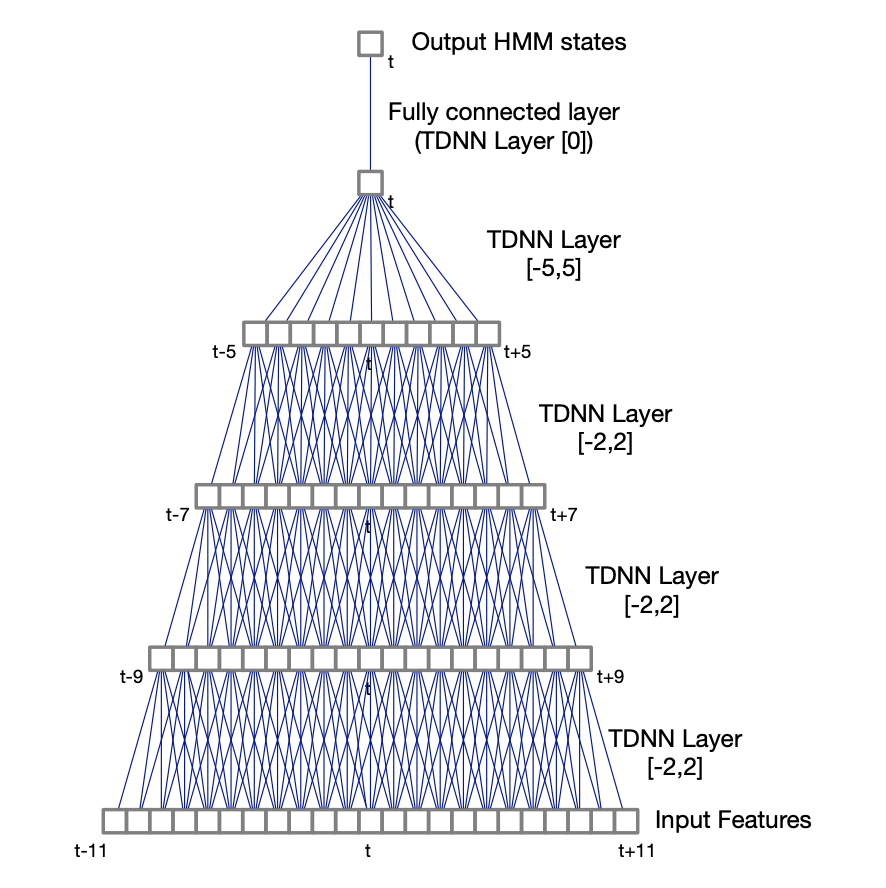 A TDNN with a context (-2, 2) has 5 times more weights than a regular DNN. For this reason, sub-sampled TDNNs are explored. Due to the large overlaps between input contexts at adjacent time steps, which are likely to be correlated, we take a sub-sample window of hidden unit activations. It reduces computation time and model weights. 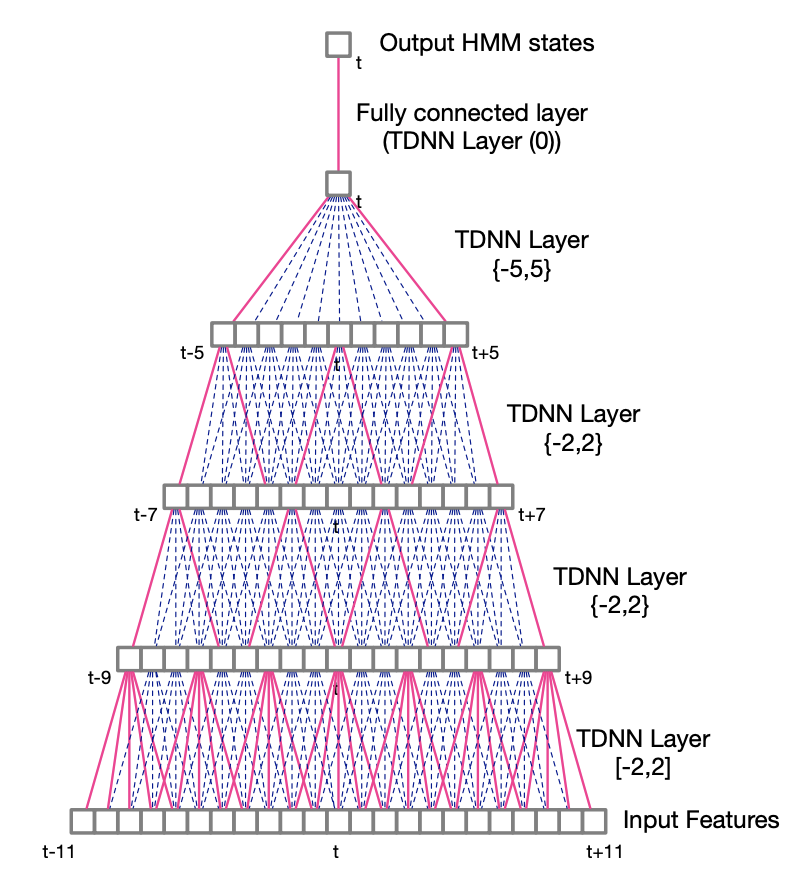 In its unfolded representation, the RNN for a sequence of T inputs is a T-layer network with shared weights. It can keep information through time.

LSTMs avoid the vanishing gradient problem of RNNs. Bidirectional RNNs consider both the right and the left context, in a forward layer and a backward layer. Deep RNNs have several hidden layers, and deep bidirectional LSTM combine the advantages of all these methods: 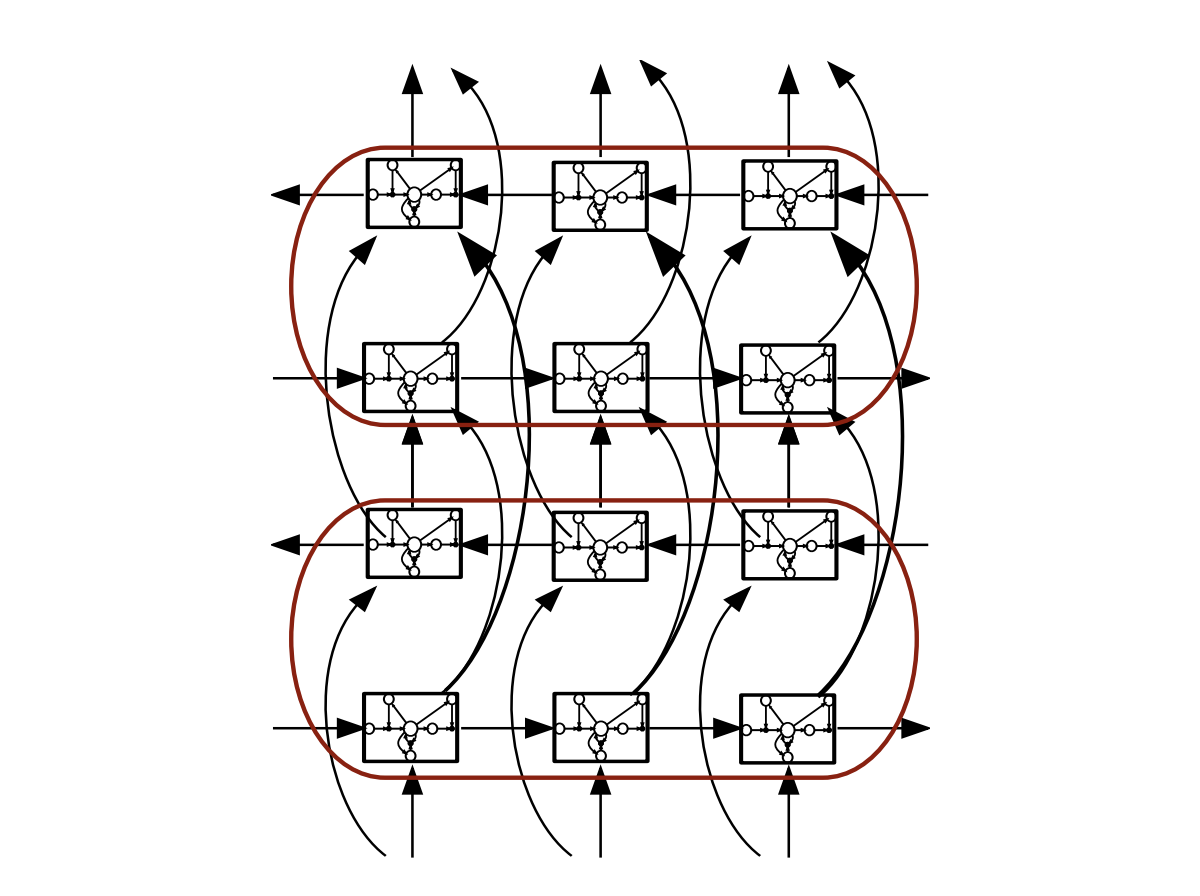 Here is an example of a Bidirectional LSTM Acoustic Model training on the Switchboard dataset: