This article provides a summary of the course “Automatic speech recognition” by Gwénolé Lecorvé from the Research in Computer Science (SIF) master, to which I added notes of the Statistical Sequence Processing course of EPFL, and from some tutorials/personal notes. All references are presented at the end.

Automatic Speech Recognition (ASR), or Speech-to-text (STT) is a field of study that aims to transform raw audio into a sequence of corresponding words.

Some of the speech-related tasks involve:

The classical pipeline in an ASR-powered application involves the Speech-to-text, Natural Language Processing and Text-to-speech.

ASR is not easy since there are lots of variabilities:

From a Machine Learning perspective, ASR is also really hard:

How is speech produced?

Let us first focus on how speech is produced. An excitation \(e\) is produced through lungs. It takes the form of an initial waveform, describes as an airflow over time.

Then, vibrations are produced by vocal cords, filters \(f\) are applied through pharynx, tongue… 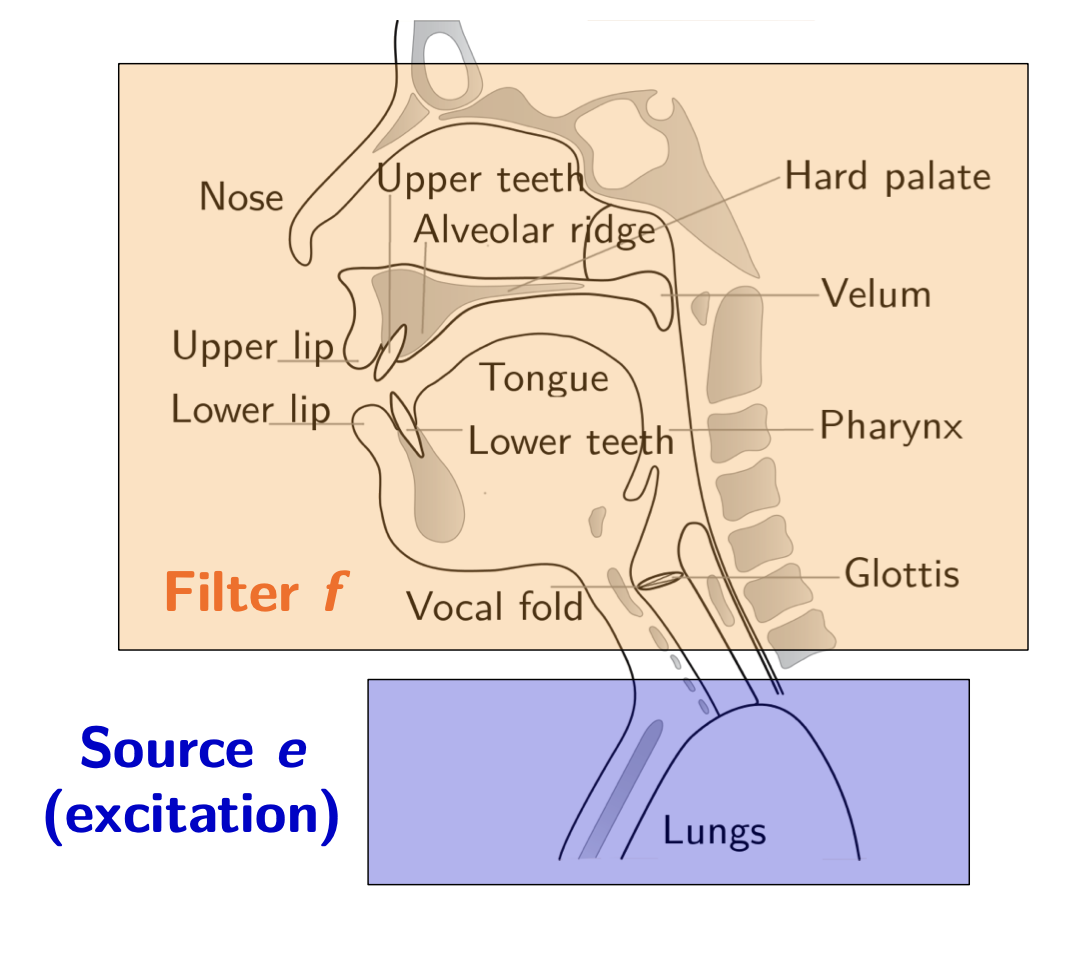 The output signal produced can be written as \(s = f * e\), a convolution between the excitation and the filters. Hence, assuming \(f\) is linear and time-independent:

From the initial waveform, we generate the glotal spectrum, right out of the vocal cords. A bit higher the vocal tract, at the level of the pharynx, pitches are formed and produce the formants of the vocal tract. Finally, the output spectrum gives us the intensity over the range of frequencies produced. 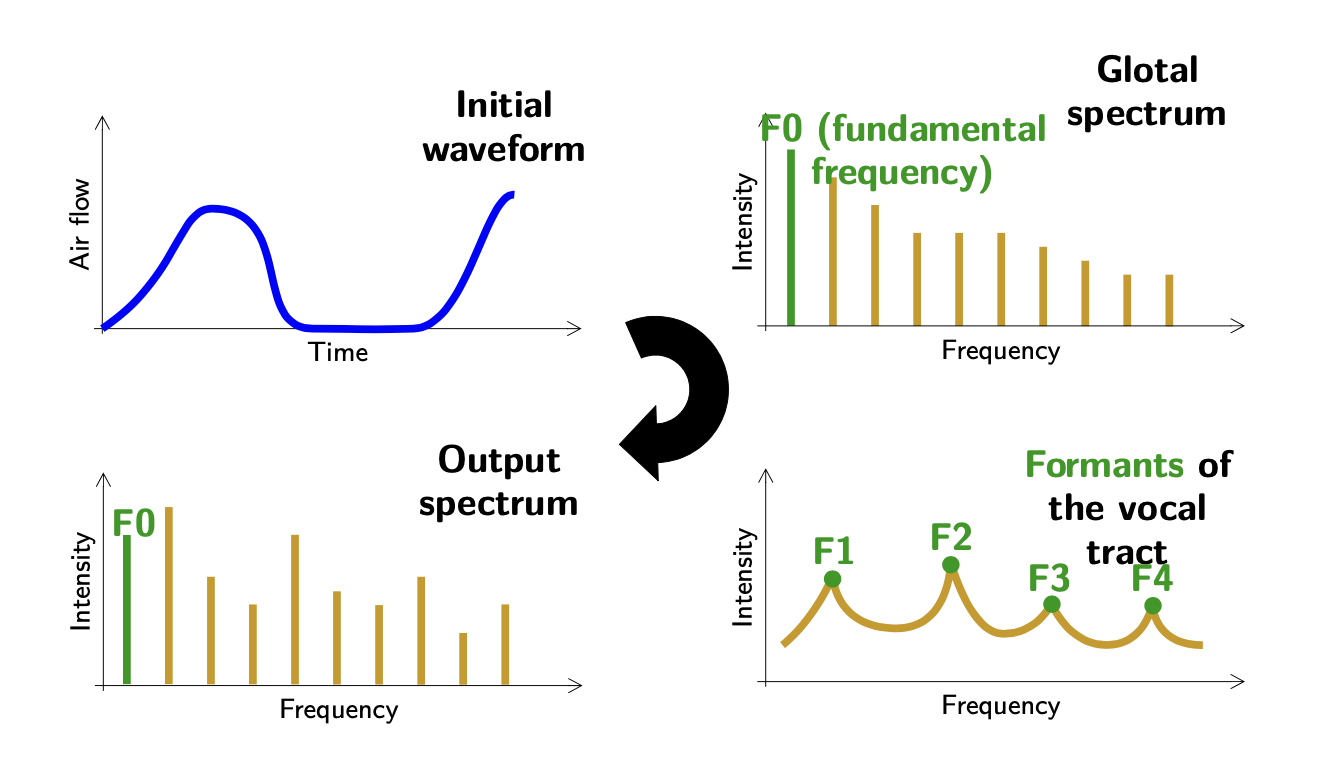 In automatic speech recognition, you do not train an Artificial Neural Network to make predictions on a set of 50’000 classes, each of them representing a word.

In fact, you take an input sequence, and produce an output sequence. And each word is represented as a phoneme, a set of elementary sounds in a language based on the International Phonetic Alphabet (IPA). To learn more about linguistics and phonetic, feel free to check this course from Harvard. There are around 40 to 50 different phonemes in English.

Phones are speech sounds defined by the acoustics, potentially unlimited in number,

For example, the word “French” is written under IPA as : / f ɹ ɛ n t ʃ /. The phoneme describes the voiceness / unvoiceness as well as the position of articulators.

Phonemes are language-dependent, since the sounds produced in languages are not the same. We define a minimal pair as two words that differ by only one phoneme. For example, “kill” and “kiss”.

For the sake of completeness, here are the consonant and vowel phonemes in standard french: 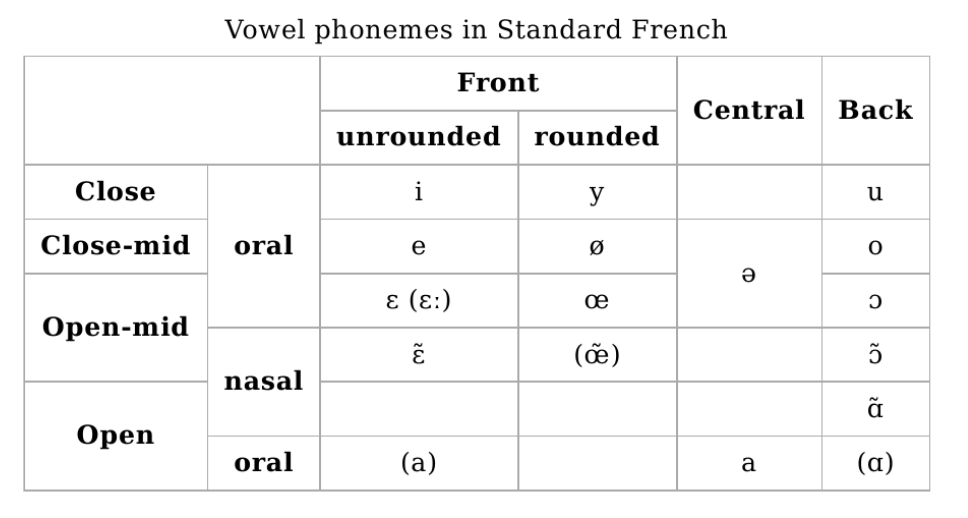 There are several ways to see a word:

Therefore, labeling speech can be done at several levels:

And the labels may be time-algined if we know when they occur in speech.

The vocabulary is defined as the set of words in a specific task, a language or several languages based on the ASR system we want to build. If we have a large vocabulary, we talk about Large vocabulary continuous speech recognition (LVCSR). If some words we encounter in production have never been seen in training, we talk about Out Of Vocabulary words (OOV).

We usually evaluate the performance of an ASR system using Word Error Rate (WER). We take as a reference a manual transcript. We then compute the number of mistakes made by the ASR system. Mistakes might include:

The WER is computed as:

The perfect WER should be as close to 0 as possible. The number of substitutions, insertions and deletions is computed using the Wagner-Fischer dynamic programming algorithm for word alignment.

Let us denote the optimal word sequence \(W^{\star}\) from the vocabulary. Let the input sequence of acoustic features be \(X\). Stastically, our aim is to identify the optimal sequence such that:

This is known as the “Fundamental Equation of Statistical Speech Processing”. Using Bayes Rule, we can rewrite is as :

Finally, we suppose independence and remove the term \(P(X)\). Hence, we can re-formulate our problem as:

The steps are presented in the following diagram:

From the speech analysis, we should extract features \(X\) which are:

Features we typically extract include:

We should then normalize the features extracted to avoid mismatches across samples with mean and variance normalization.

The acoustic model is a complex model, usually based on Hidden Markov Models and Artificial Neural Networks, modeling the relationship between the audio signal and the phonetic units in the language.

In isolated word/pattern recognition, the acoustic features (here \(Y\)) are used as an input to a classifier whose rose is to output the correct word. However, we take input sequence and should output sequences too when it comes to continuous speech recognition. 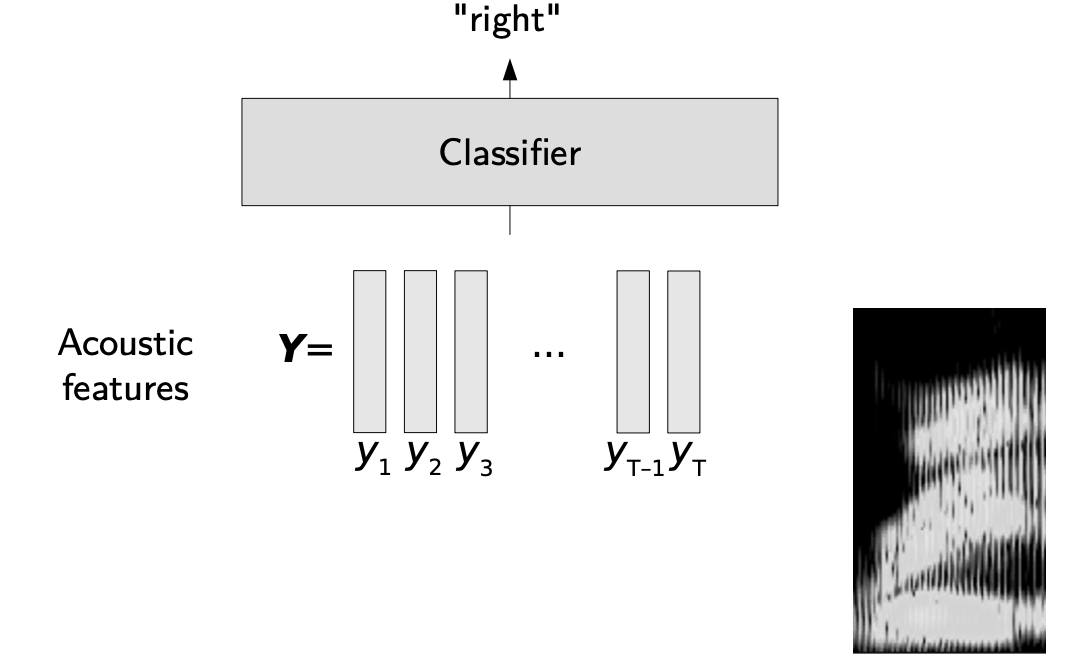 The acoustic model goes further than a simple classifier. It outputs a sequence of phonemes. 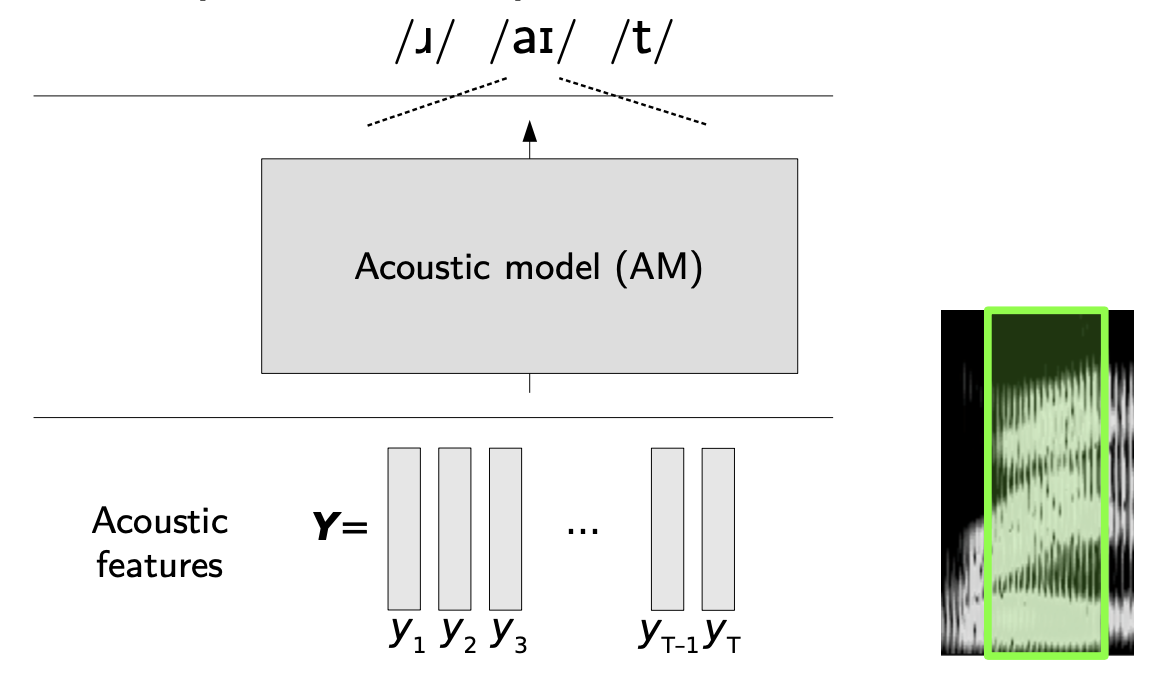 Hidden Markov Models are natural candidates for Acoustic Models since they are great at modeling sequences. If you want to read more on HMMs and HMM-GMM training, you can read this article. The HMM has underlying states \(s_i\), and at each state, observations \(o_i\) are generated. 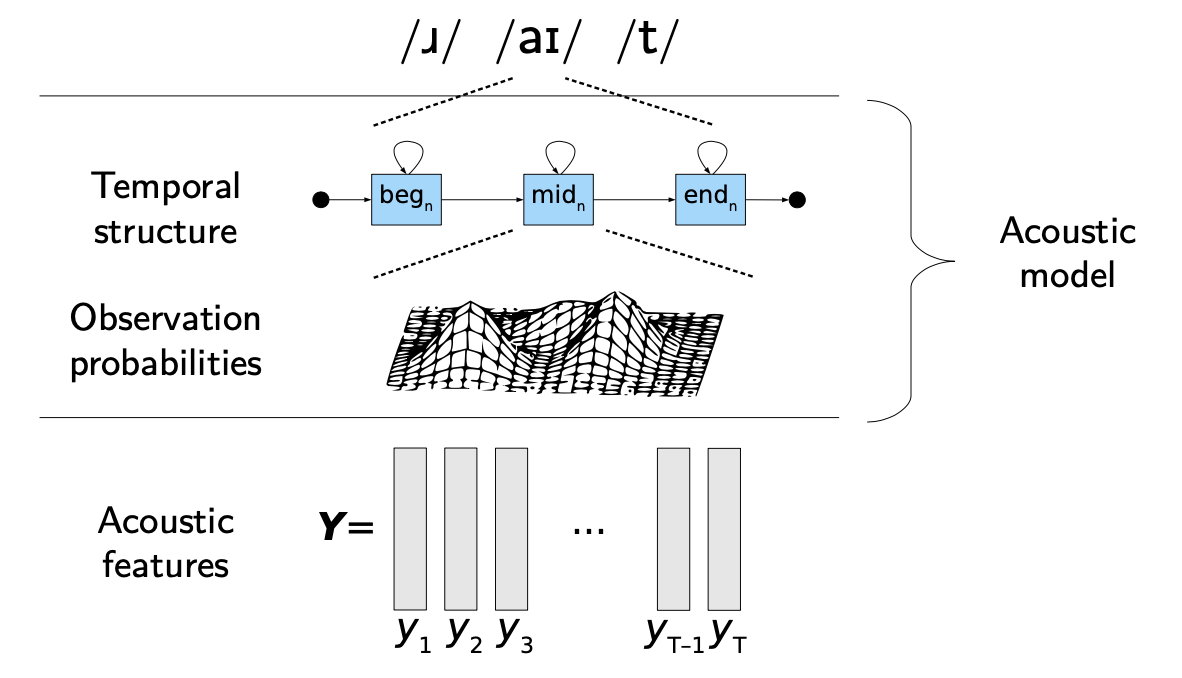 In HMMs, 1 phoneme is typically represented by a 3 or 5 state linear HMM (generally the beginning, middle and end of the phoneme).

The topology of HMMs is flexible by nature, and we can choose to have each phoneme being represented by a single state, or 3 states for example: 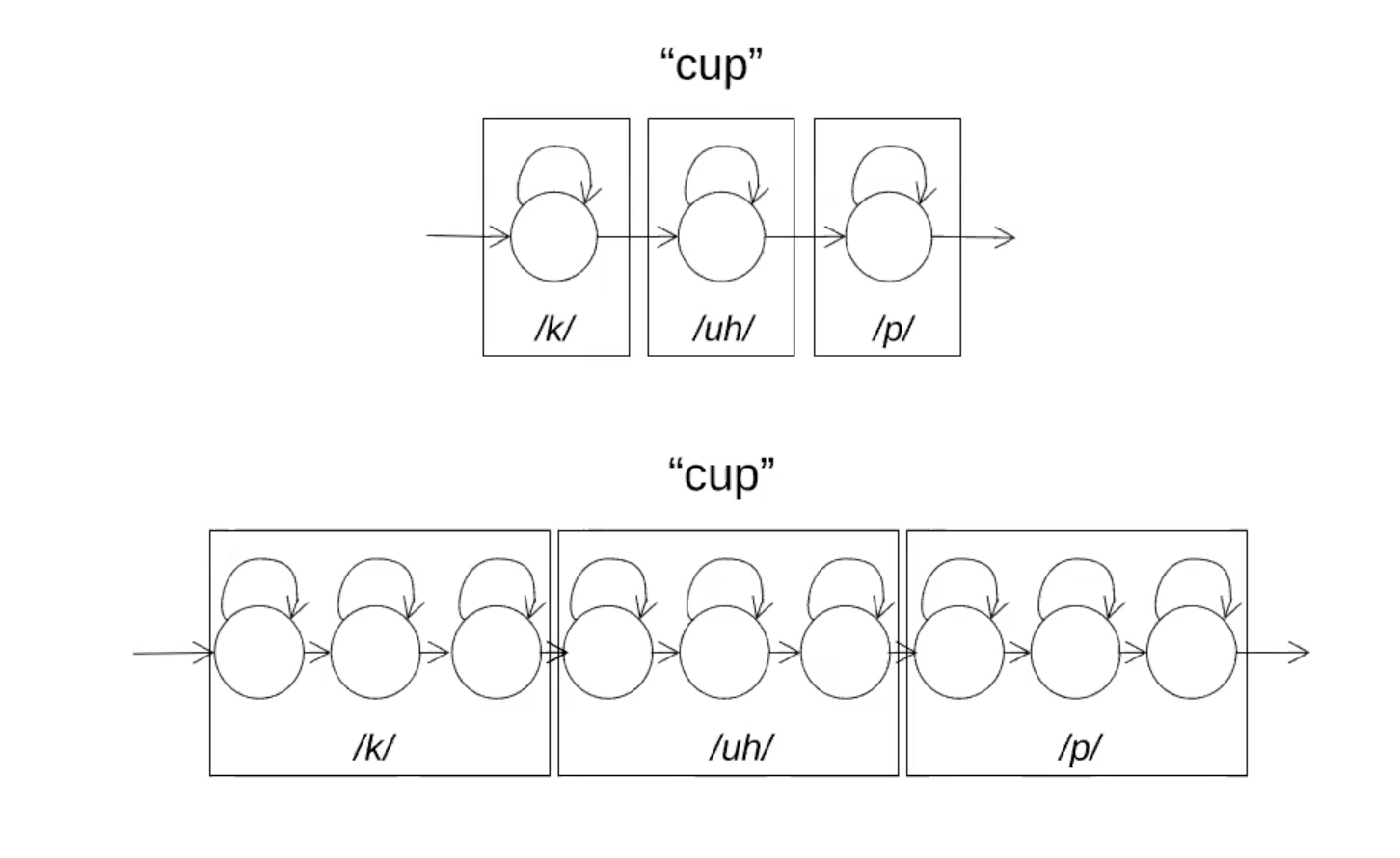 The HMM supposes observation independence, in the sense that:

The HMM can also output context-dependent phonemes, called triphones. Triphones are simply a group of 3 phonemes, the left one being the left context, and the right one, the right context.

The HMM is trained using Baum-Welsch algorithm. The HMMs learns to give the probability of each end of phoneme at time t. We usually suppose the observations are generated by a mixture of Gaussians (Gaussian Mixture Models, GMMs) at each state, i.e:

The training of the HMM-GMM is solved by Expectation Maximization (EM). In the EM training, the outputs of the GMM \(P(X \mid W)\) are used as inputs for the GMM training iteratively, and the Viterbi or Baum Welsch algorithm trains the HMM (i.e. identifies the transition matrices) to produce the best state sequence.

The full pipeline is presented below: 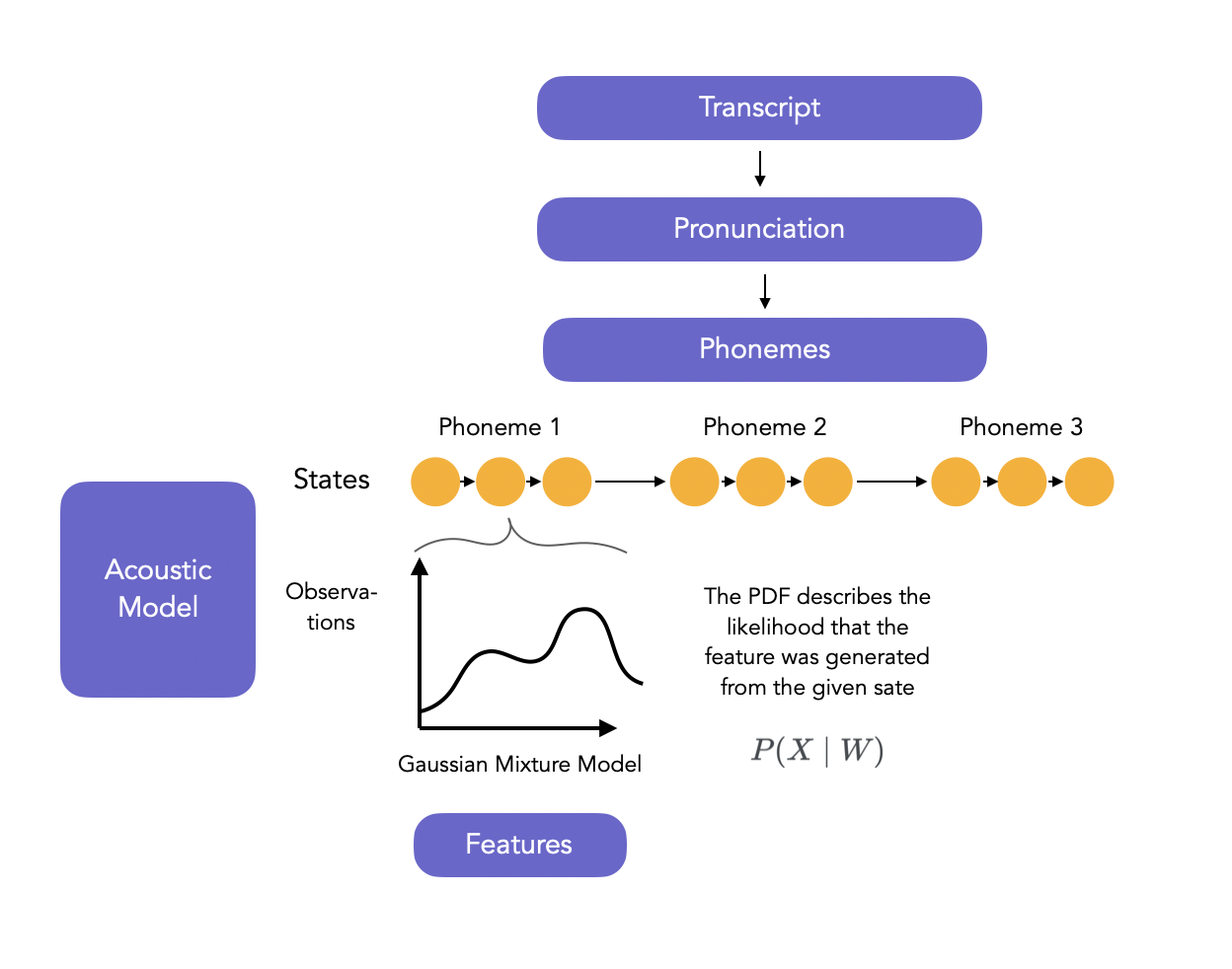 Latest models focus on hybrid HMM-DNN architectures and approach the acoustic model in another way. In such approach, we do not care about the acoustic model \(P(X \mid W)\), but we directly tackle \(P(W \mid X)\) as the probability of observing state sequences given \(X\).

Hence, back to the first acoustic modeling equation, we target:

The aim of the DNN is to model the posterior probabilities over HMM states. 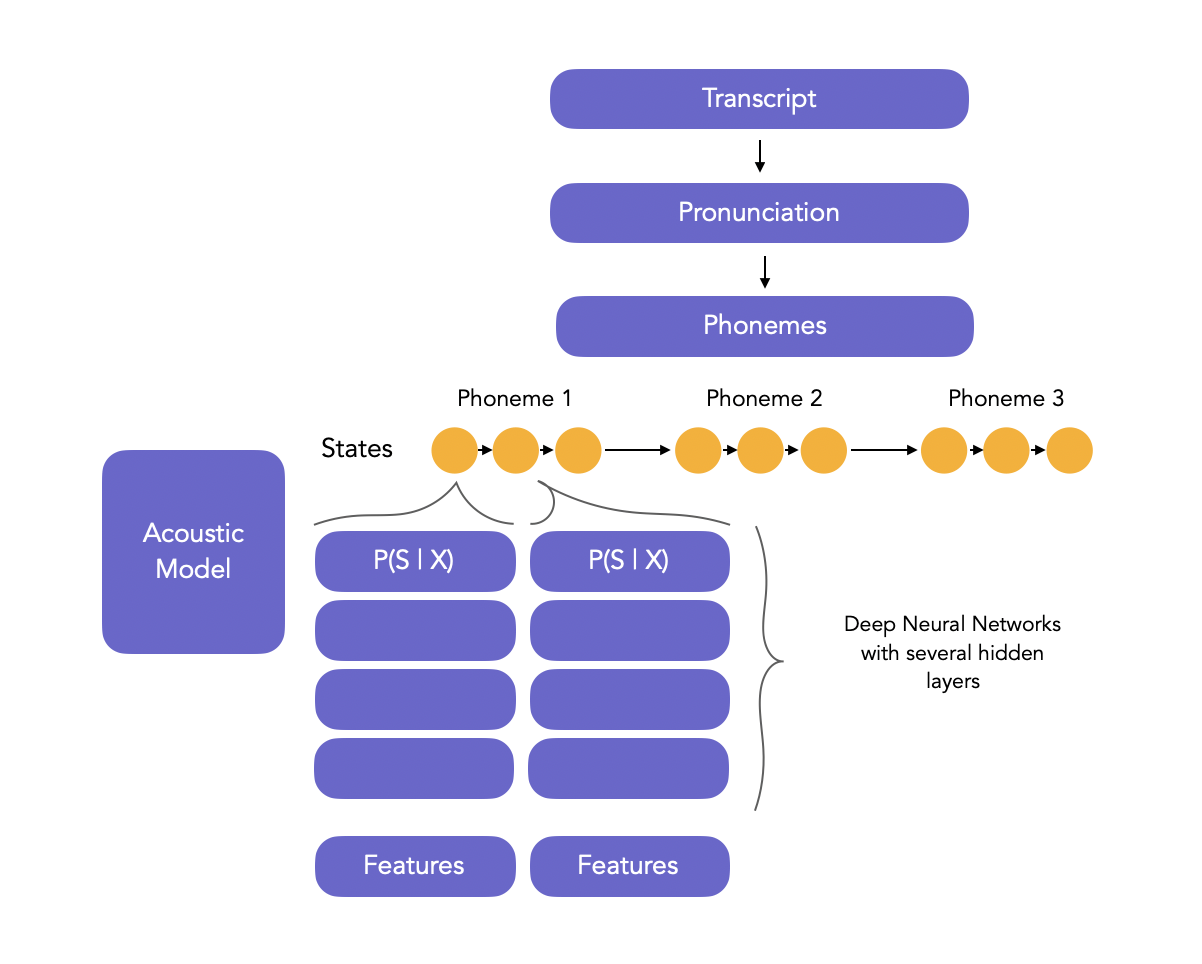 Some considerations on the HMM-DNN framework:

You might have noticed that the training of the DNN produces posterior, whereas the Viterbi Backward-Forward algorithm requires \(P(X \mid W)\) to identify the optimal sequence when training the HMM. Therefore, we use Bayes Rule:

The probability of the acoustic feature \(P(X)\) is not known, but it just scales all the likelihoods by the same factor, and therefore does not modify the alignment.

The training of HMM-DNN architectures is based:

Here is a brief summary of the pros and cons of HMM/DNN and HMM/GMM:

In End-to-end models, the steps of feature extraction and phoneme prediction are combined:

This concludes the part on acoustic modeling.

In small vocabulary sizes, it is quite easy to collect a lot of utterances for each word, and the HMM-GMM or HMM-DNN training is efficient. However, “statistical modeling requires a sufficient number of examples to get a good estimate of the relationship between speech input and the parts of words”. In large-vocabulary tasks, we might collect 1 or even 0 training examples. t. Thus, it is not feasible to train a model for each word, and we need to share information across words, based on the pronunciation.

We consider words are being sequences of states \(Q\).

The pronunciation dictionary is written by human experts, and defined in the IPA. The pronunciation of words is typically stored in a lexical tree, a data structure that allows us to share histories between words in the lexicon. 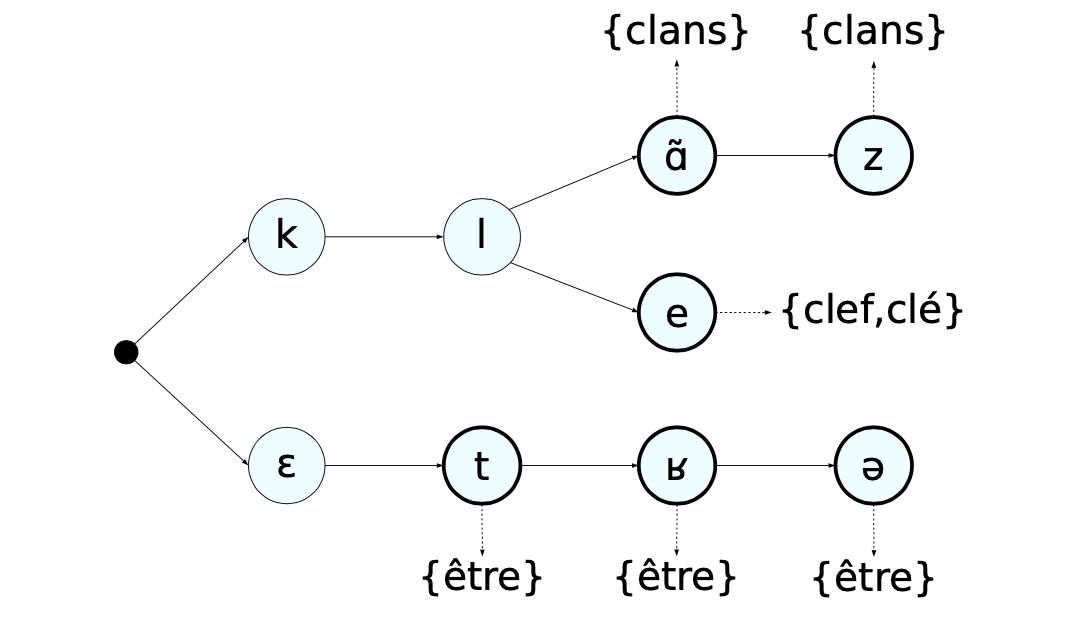 When decoding a sequence in prediction, we must identify the most likely path in the tree based on the HMM-DNN output.

In ASR, most recent approaches are:

Let’s get back to our ASR base equation:

The language model is defined as \(P(W)\). It assigns a probability estimate to word sequences, and defines:

In statistical language modeling, we aim to disambiguate sequences such as:

The maximum likelihood estimation of a sequence is given by:

We call this ratio the relative frequency. The probability of a whole sequence is given by the chain rule of probabilities:

This approach seems logic, but the longer the sequence, the most likely it will be that we encounter 0’s, hence bringing the probability of the whole sequence at 0.

What solutions can we apply?

But one of the most popular solution is the n-gram model. The idea behind the n-gram model is to truncate the word history to the last 2, 3, 4 or 5 words, and therefore approximate the history of the word:

Another approach is linear interpolate, where we combine different order n-grams by linearly interpolating all the models:

There are 2 types of evaluation metrics for language models:

We could also use the raw probabilities to evaluate the language model, but the perpeplixity is defined as the inverse probability of the test set, normalized by the number of words. For example, for a bi-gram model, the perpeplexity (noted PP) is defined as:

The lower the perplexity, the better

Language models are trained on a closed vocabulary. Hence, when a new unknown word is met, it is said to be Out of Vocabulary (OOV).

Recurrent neural networks and LSTMs are natural candidates when learning such language models.

The training is now done. The final step to cover is the decoding, i.e. the predictions to make when we collect audio features and want to produce transcript.

We need to find:

However, exploring the whole spact, especially since the Language Model \(P(W)\) has a really large scale factor, can be incredibly long.

One of the solutions is to explore the Beam Search. The Beam Search algorithm greatly reduces the scale factor within a language model (whether N-gram based or Neural-network-based). In Beam Search, we:

Let us illustrate this process the following way. We want to evaluate the sequence that is the most likely. We first compute the probability of the different words of the vocabulary to be the starting word of the sentence: 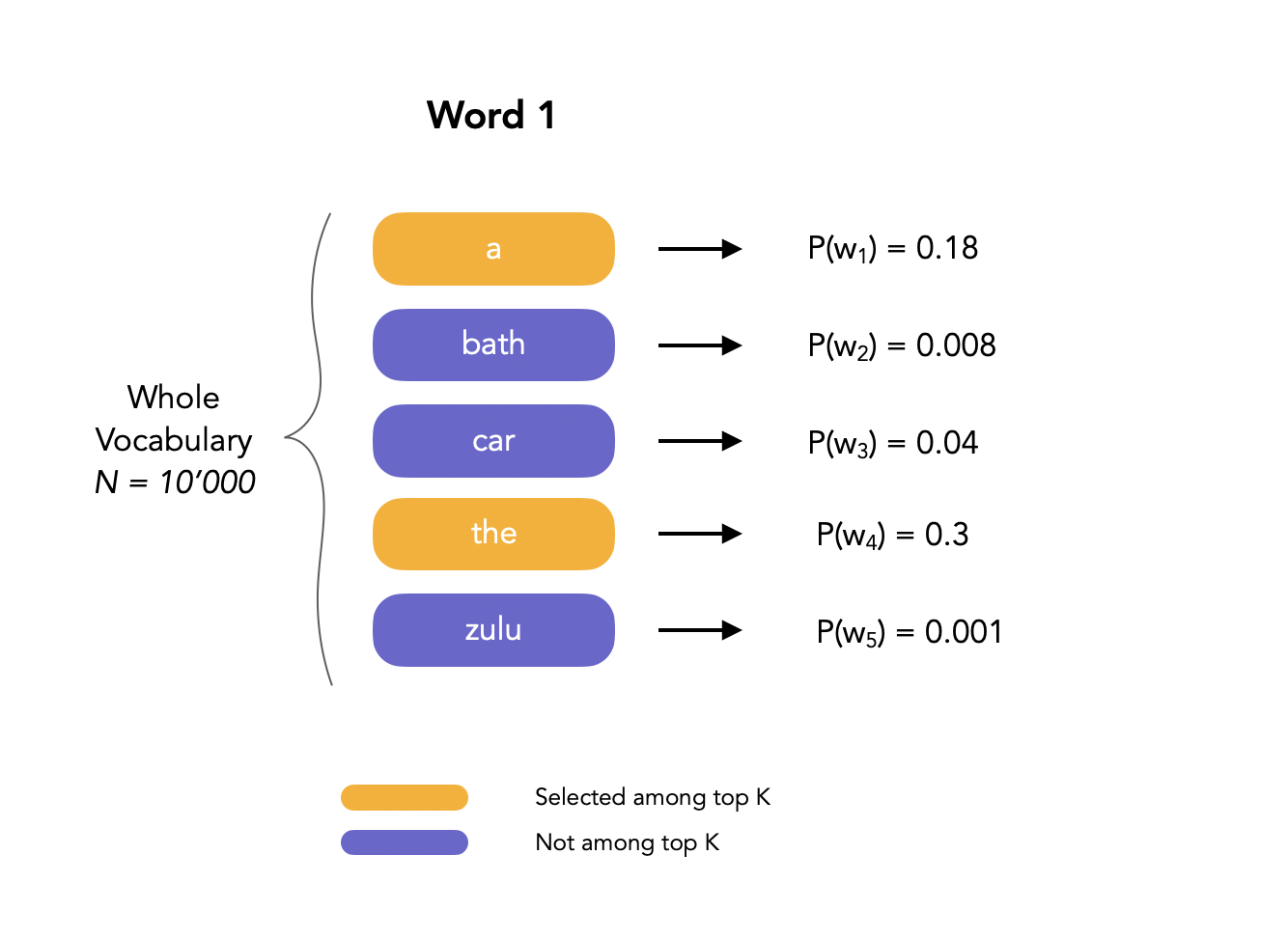 Here, we fix the beam width to 2, meaning that we only select the 2 most likely words to start with. Then, we move on to the next word, and compute the probability of observing it using conditional probability in the language model: \(P(w_2, w_1 \mid W) = P(w_1 \mid W) P(w_2 \mid w_1, W)\). We might see that a potential candidate, e.g. “The”, when selecting the top 2 candidates second words among all possible words, is not a possible path anymore. In that case, we narrow the search, since we know that the first must must be “a”. 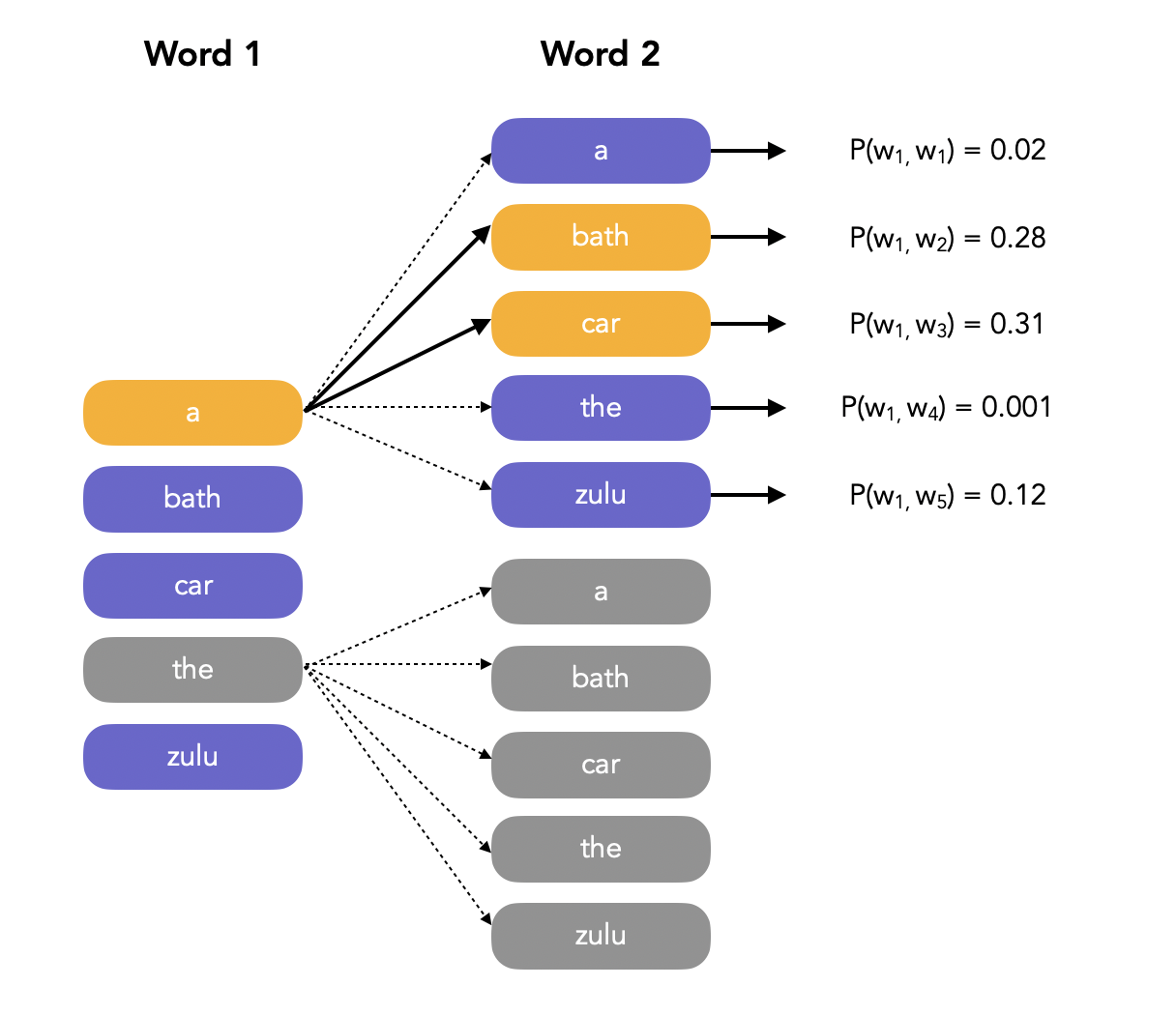 And so on… Another approach to decoding is the Weighted Finite State Transducers (I’ll make an article on that).

Summary of the ASR pipeline

In their paper “Word Embeddings for Speech Recognition”, Samy Bengio and Georg Heigold present a good summary of a modern ASR architecture: 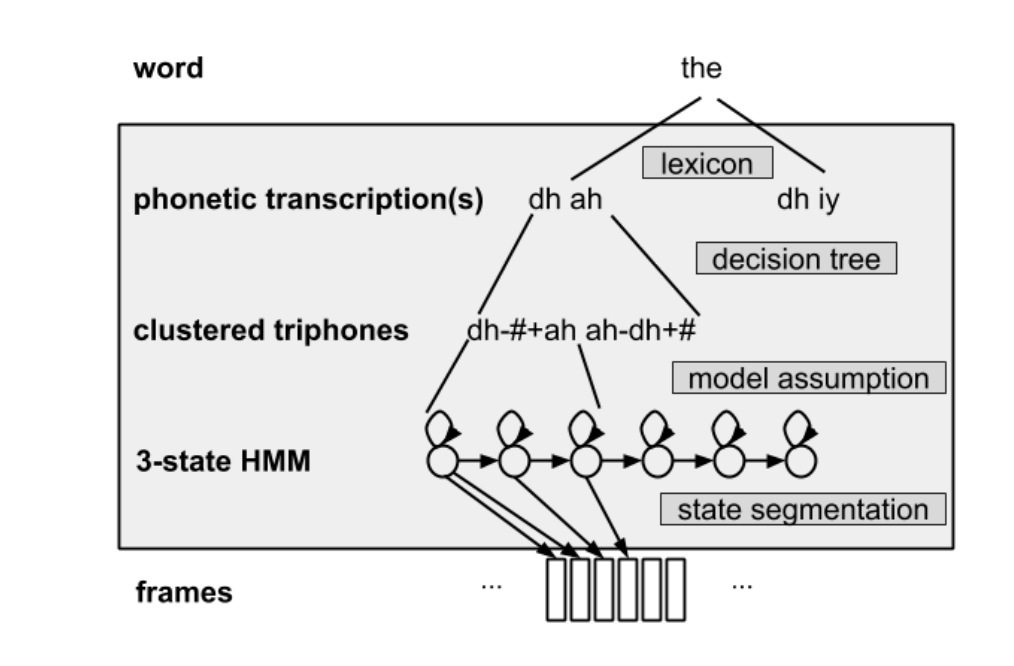 Alright, this article is already long, but we’re almost done. So far, we mostly covered historical statistical approaches. These approaches work very well. However, most recent papers and implementations focus on end-to-end approaches, where:

These approaches, also called encoder-decoder, are part of sequence-to-sequence models. Sequence to sequence models learn to map a sequence of inputs to a sequence of outputs, even though their length might differ. This is widely used in Machine Translation for example.

As illustrated below, the Encoder reduces the input sequence to a encoder vector through a stack of RNNs, and the decoder vector uses this vector as an input.

I will write more about End-to-end models in another article.