So far, we covered the main kind of graphs, and the most basic characteristics to describe a graph. We’ll now cover into more details graph analysis/algorithms and the different ways a graph can be analyzed.

To understand the context, here are some use cases for graph algorithms :

3 main categories of graph algorithms are currently supported in most frameworks (networkx in Python, or Neo4J for example) :

For what comes next, open a Jupyter Notebook and import the following packages :

If you have not already installed the networkx package, simply run :

The following articles will be using the latest version 2.x of networkx. NetworkX is a Python package for the creation, manipulation, and study of the structure, dynamics, and functions of complex networks.

To illustrate the different concepts we’ll cover and how it applies to graphs we’ll take the Karate Club example. This graph is present in the networkx package. It represents the relations of members of a Karate Club. However, due to a disagreement of the founders of the club, the club has recently been split in two. We’ll try to illustrate this event with graphs.

First, load and plot the graph :

I. Pathfinding and Graph Search Algorithms

Shortest Path calculates the shortest weighted (if the graph is weighted) path between a pair of nodes. It is used to identify optimal driving directions or degree of separation between two people on a social network for example.

Returns a list of the minimal path between each node of the graph :

The Single Source Shortest Path (SSSP) computes the shortest path from a given node to all other nodes in the graph. It is often used for routing protocol for IP networks for example.

The All Pairs Shortest Path (APSP) algorithm computes the shortest path length between all pairs of nodes. It is quicker than calling the Single Source Shortest Path for every pair of nodes.

This algorithm can typically be used to determine traffic load expected on different segments of a transportation grid.

Community detection is a process by which we partition the nodes into a set of groups/clusters according to a certain quality criterion. It is typically used to identify social communities, customers behaviors or web pages topics.

A community is a set of nodes densely connected internally and/or sparsely connected externally. There is however no universal definition that one can give to define communities.

The process to identify communities is the following :

We’ll try to define this into more details.

We are now ready to define quality criteria.

Based on internal connections :

Based on external connections :

A note on modularity : \(E(m_s)\) is computed with respect to a random process which preserves the degree of each node. Each degree is split into two parts. Each part is combined with another randomly.

However, finding communities maximizing the modularity is an exponentially complex task in the number of groups. It can easily get very costly with a few hundred nodes. For this reason, methods such as the Louvain method have been developed.

Before defining the Louvain method, it is important to define the notion of modularity. Modularity is a measure of how well groups have been partitioned into clusters : 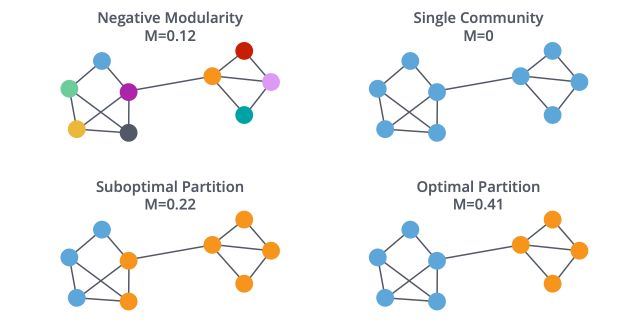 The pseudo-code of the Louvain method is the following :

This might seem a bit confusing right now. The only thing we’re doing is to group the closest nodes so that we optimize the modularity criteria.

Note that there is no theoretical guarantee of the Louvain method, but it works well in practice.

The Strongly Connected Components (SCC) algorithm finds sets of connected nodes in a directed graph where each node is reachable in both directions from any other node in the same set. It is often used early in a graph analysis process to give us an idea of how our graph is structured, for example, to explore financial statements data when we look at who owns shared in what company.

The Weakly Connected Components, or Union Find algorithm finds sets of connected nodes in a directed graph where each node is reachable from any other node in the same set. It only needs a path to exist between pairs of nodes in one direction, whereas SCC needs a path to exist in both directions. As with SCC, Union Find is often used early in analysis to understand a graph’s structure.

Union Find is a pre-processing step that is essential before any kind of algorithm, to understand the graph’s structure.

We can test for connected directed graphs using :

Or for undirected graphs using :

Which returns a boolean.

Make sure to check the Networkx documentation on the Connectivity for implementations.

In hierarchical clustering, we build a hierarchy of clusters. We represent the clusters under a form a dendrogram : 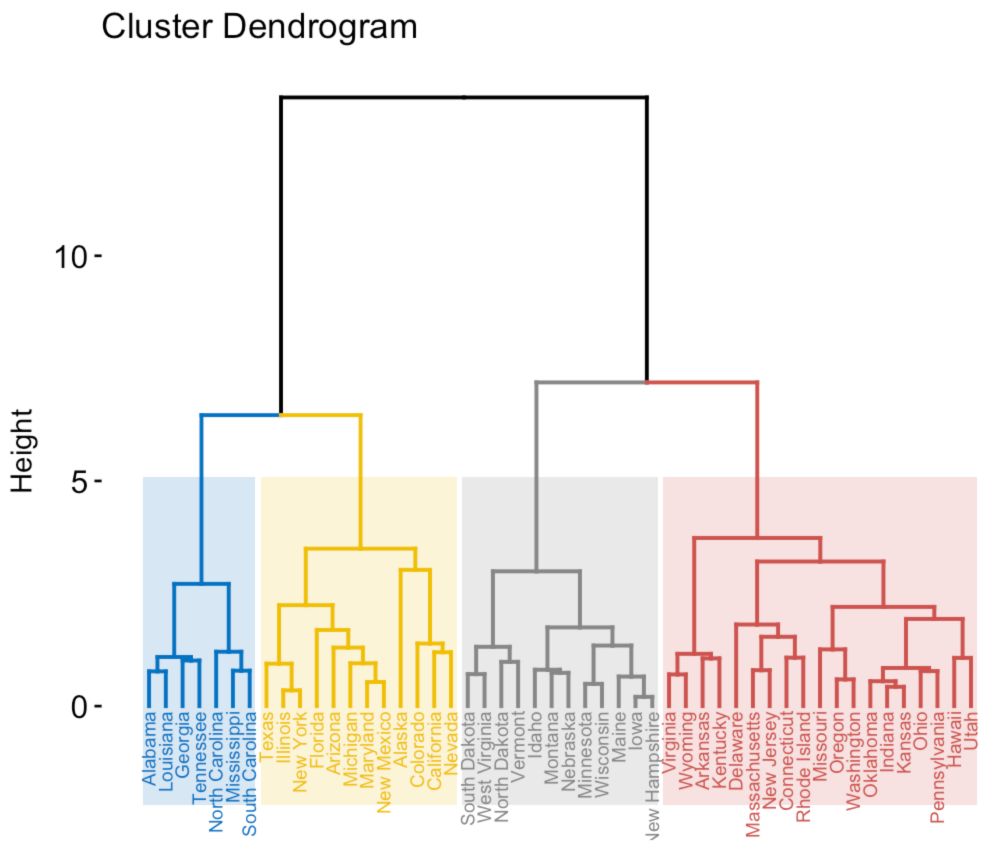 The idea is to analyze community structures at different scales. We build the dendrogram bottom-up. We start with a cluster at each node and merge the two “closest” nodes.

But how do we measure close clusters ? We use similarity distances. Let \(d(i,j)\) be the length of the shortest path between \(i\) and \(j\).

The similarity distances can be illustrated as follows : 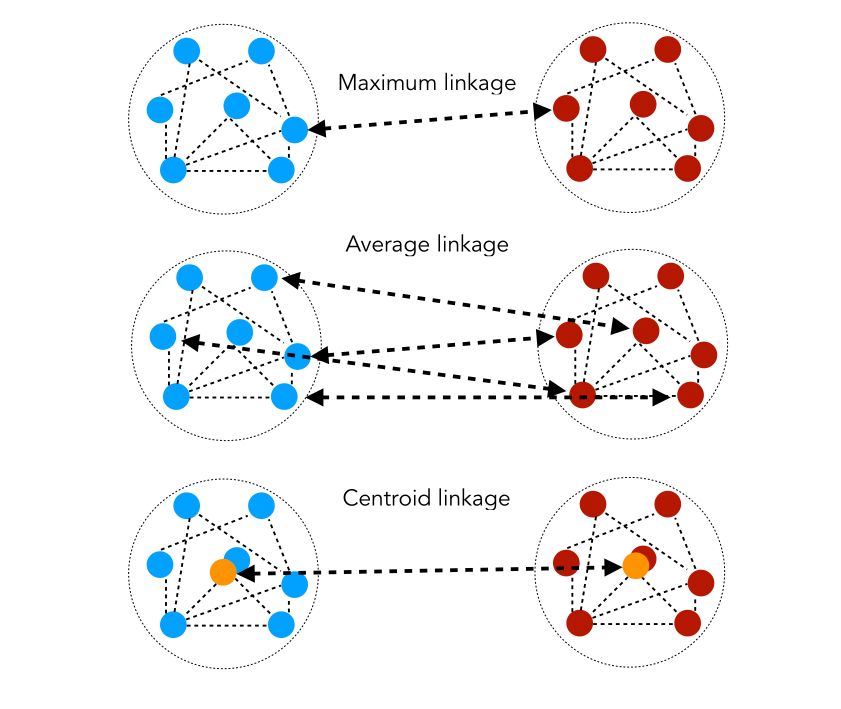 Back to our Karate example. Then, before applying hierarchical clustering, we need to define the matrix of distances between each node.

Now, we’ll use the AgglomerativeClustering function of sklearn to identify hierarchical clustering.

And finally, draw the resulting graph with colors depending on the cluster : 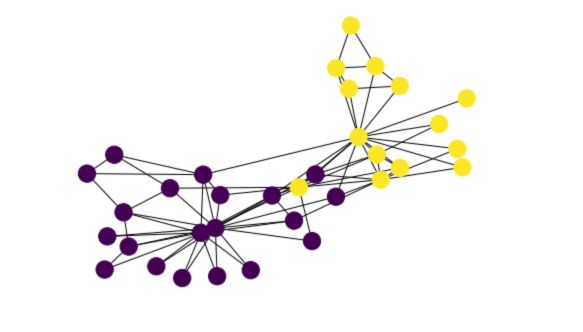 The clustering coefficient measures how well two nodes tend to cluster together.

A local clustering coefficient measures how close a node \(i\) and its neighbors are to being a complete graph.

A global coefficient measures the density of triangles (local clusters) in the graph :

In the graph shown above, the clustering coefficient is equal to :

Nodes with a low degree are connected to other nodes in their community. Nodes with high degrees are linked to nodes in different communities.

And average the results to find the global clustering coefficient of the graph :

It is hard to give a universal measure of centrality. Centrality measures express by how much a node is important when we want to identify important web pages, bottlenecks in transportation networks…

A walk is a path which can go through the same node several times. Centrality measures vary with the type of walk considered and the way of counting them.

PageRank estimates a current node’s importance from its linked neighbors and then again from their respective neighbors. Although popularized by Google, it’s widely recognized as a way of detecting influential nodes in any network.

It is for example used to suggest connections on social networks.

PageRank is computed by either iteratively distributing one node’s rank (originally based on the degree) over its neighbors or by randomly traversing the graph and counting the frequency of hitting each node during these walks. 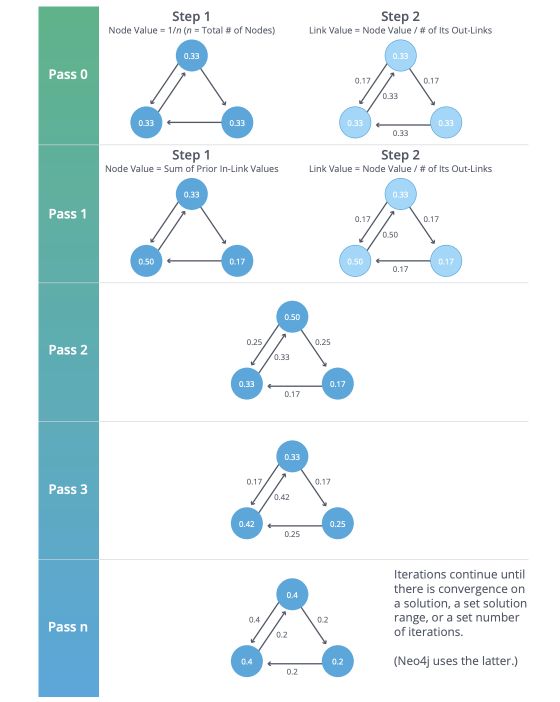 Degree Centrality measures the number of incoming and outgoing relationships from a node.

Degree Centrality is used to identify the most influential persons on a social network for example.

Eigenvector Centrality represents the number of walks of infinite length ending at node \(i\). This gives more importance to nodes with well-connected neighbors.

Closeness Centrality is a way of detecting nodes that can spread information efficiently through a graph. It is used to research organizational networks where individuals with high closeness centrality are in a favorable position to control and acquire vital information and resources with the organization, for example, networks of fake news accounts or terrorist cells.

Betweenness Centrality is a way of detecting the amount of influence a node has over the flow of information in a graph. It is often used to find nodes that serve as a bridge from one part of a graph to another, for example in package delivery process or a telecommunication network.

The betweenness centrality measures the number of times a node acts as a bridge between two nodes. For example :

In Python, the implementation relies on the built-in functions of networkx : 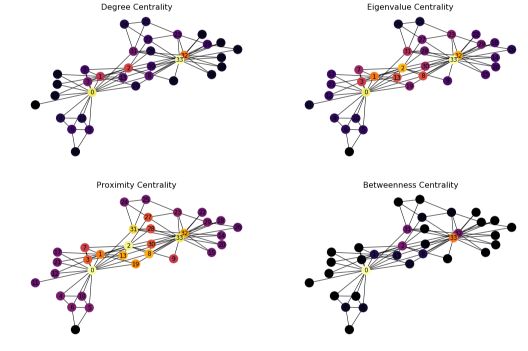 We observe that the different nodes highlighted by the centrality measures are quite distinct. Betweenness centrality, for example, produces results far from the other methods.

Conclusion : I hope that this article was helpful. Don’t hesitate to drop a comment if you have any question.