“An anomaly is an observation that deviates so much from other observations as to arouse suspicions that it was generated by a different mechanism.”, Hawkins (1980)

Anomaly detection is used in :

There are 3 types of anomaly detection :

The key steps in anomaly detection are the following :

In unsupervised anomaly detection, we make the assumption that anomalies are rare events. The underlying data are unlabeled (no normal/abnormal label), hence the denomination. Anomalies are events supposed to be locates in the tail of the distribution.

We usually estimate the region where the data is the most concentrated as the minimal region containing \(\alpha %\) of the values. This approach is called Minimum Volume Set. Samples that do not belong to the Minimum Volume Set are anomalies. For a small value of \(\alpha\) on the other hand, we tend to recover the modes.

We can define the MV Set as :

There are theoretical guarantees that there exists a unique MV set at level \(\alpha\).

Using a naive approach (the 2-split trick), we can :

We can turn the unsupervised anomaly detection problem as a binary classification. 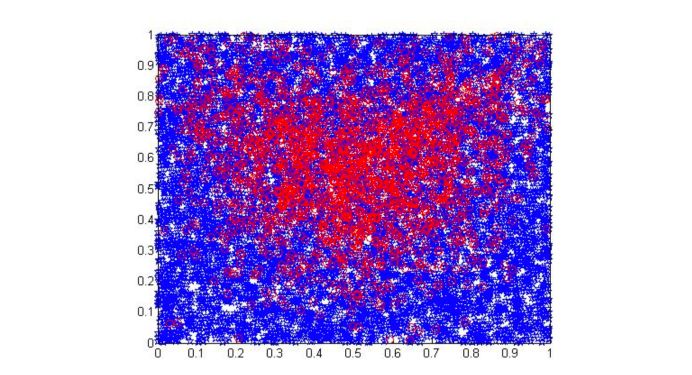 In histograms, we suppose that we have a compact feature space, and that we build partitions \(C_1, \cdots, C_K\) formed of measurable subsets of same volume :

The class \(G_P\) is the ensemble composed of unions of \(C_K\). We want to get the minimal number of partitions to keep in order to isolate the normal data and exclude the anomalies. More formally, we are looking for the solution of :

There is a simple and fast procedure to do this :

Where \(\phi\) is a tolerance level. However, such technique is usually not flexible enough.

The partition should be determined based on the data. We adopt a top-down strategy, and start from the root node \(C_{0,0}\). The volume of any cell \(C_{j,k}\) can be computed in a recursive manner.

Hyperrectangless with the label 1 are subsets of the MV set estimate. At each node \(C_{j,k}\), the split leading to siblings \(C_{j+1,2k}\) and \(C_{j+1,2k+1}\) minimizes recursively the volume of the current ddecision set G under the following constraint :

In insolation forests, we build a forest of isolation trees under the assumption that anomalies are more susceptible to isolation under random partitioning.

The main idea behind an isolation tree is to recursively (top-down) build a tree that :

This process stops when a depth limit is reached usually :

We also define a randking among anomalies, with the first data points the ones that have the highest probability to be anomalies. This is called Bipartite Ranking. It is a different approach from classification, since classification remains a local task, whereas ranking is global.

We rank and score a set of instances through a scoring function \(s(X)\) in which large number instances with label 1 appear on top of the list with high probabilities.

How do we measure the quality of a ranking?

A natural estimate of the ranking performance :

This measure is also called the rate of concording pairs, or Kendall’s association coefficient. One of the issues is that the computation of the gradients typically require to average over \(O(n^2)\) pairs.

The criterion we want to maximize is :

The empirical counterpart of \(L(s)\) is really prohibitive to compute, and the maximization is even unfeasible. To overcome such issues, generalized U-Statistics using Kernels or incomplete U-Statistics using only a sample of terms can be used.