Boosting techniques have recently been rising in Kaggle competitions and other predictive analysis tasks. You may have heard of them under the names of XGBoost or LGBM. In this tutorial, we’ll go through Adaboost, one of the first boosting techniques discovered.

This article can also be found on Towards Data Science.

The limits of Bagging

For what comes next, consider a binary classification problem. We are either classifying an observation as 0 or as 1. This is not the purpose of the article, but for the sake of clarity, let’s recall the concept of bagging.

Bagging is a technique that stands for Bootstrap Aggregating. The essence is to select T bootstrap samples, fit a classifier on each of these samples, and train the models in parallel. Typically, in a Random Forest, decision trees are trained in parallel. The results of all classifiers are then averaged into a bagging classifier :

This process can be illustrated in the following way. Let’s consider 3 classifiers which produce a classification result and can be either right or wrong. If we plot the results of the 3 classifiers, there are regions in which the classifiers will be wrong. These regions are represented in red.

This example works perfectly since when one classifier is wrong, the two others are correct. By voting classifier, you achieve great accuracy! But as you might guess, there are also cases in which Bagging does not work properly, when all classifiers are mistaken in the same region.

For this reason, the intuition behind the discovery of Boosting was the following :

Instead of training the models in parallel, we can train them sequentially. This is the essence of Boosting!

Boosting trains a series of low performing algorithms, called weak learners, by adjusting the error metric over time. Weak learners are algorithms whose error rate is slightly under 50% as illustrated below :

How could we implement such classifier? By weighting errors throughout the iterations! This would give more weight to regions in which the previous classifiers performed poorly.

Let’s consider data points on a 2D plot. Some of them will be well classified, others won’t. Usually, the weight attributed to each error when computing the error rate is \(\frac {1} {n}\) where n is the number of data points to classify. 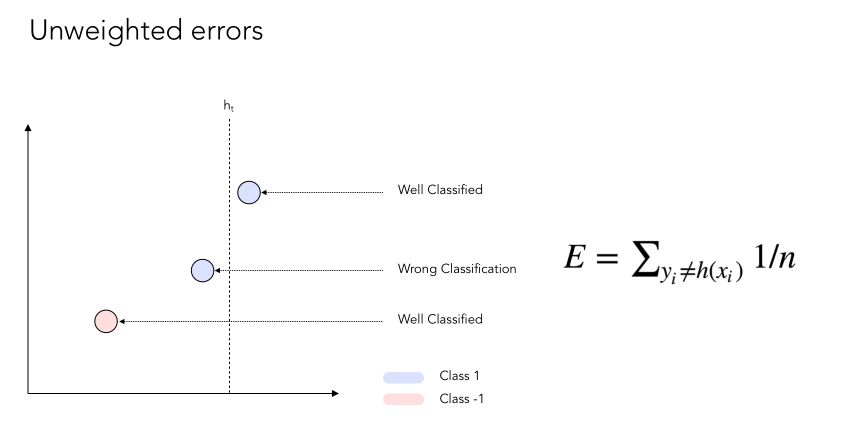 Now if we apply some weight to the errors : 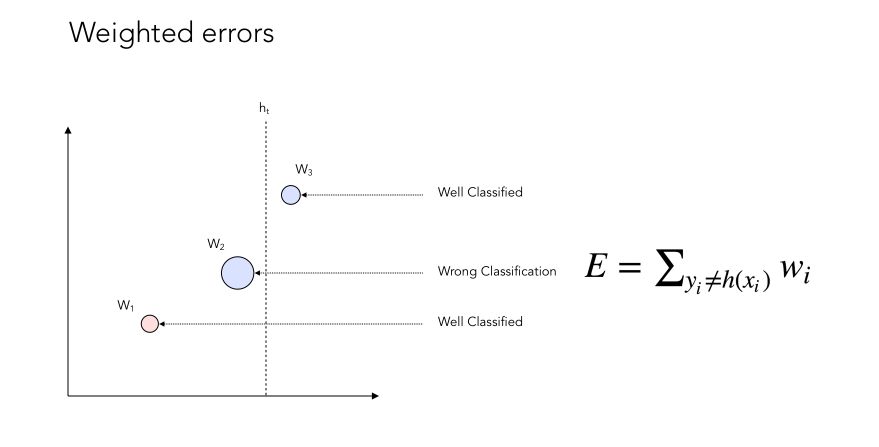 You might now notice that we give more weight to the data points that are not well classified. Here’s an illustration of the weighting process : 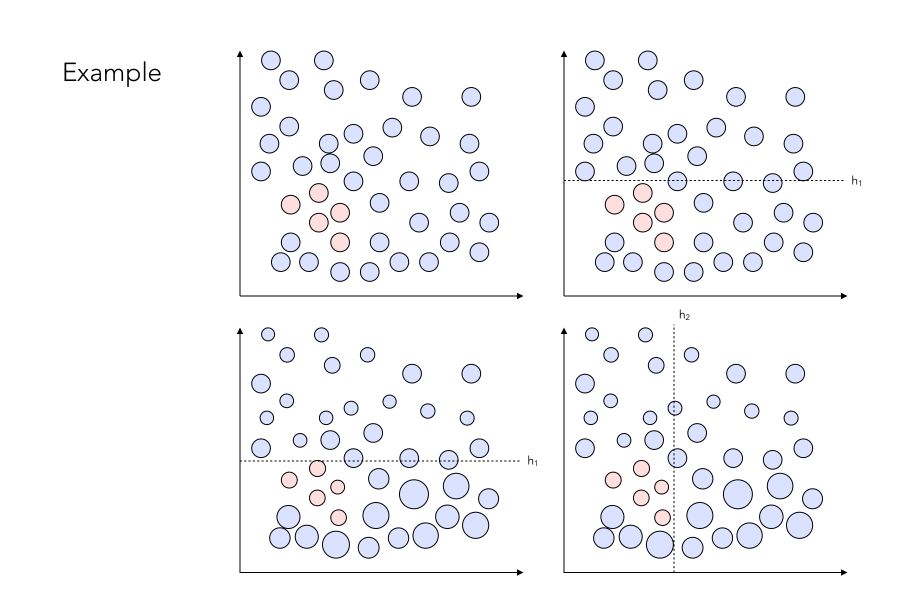 In the end, we want to build a strong classifier that may look like this : 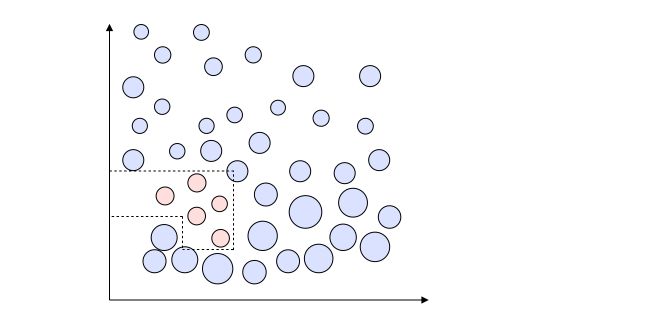 One question you might ask, is how many classifiers should one implement to have it working well? And how is each classifier chosen at each step?

The answer lies in the definition of so-called tree stumps! Tree stumps defines a 1-level decision tree. The main idea is that at each step, we want to find the best stump, i.e the best data split, that minimizes the overall error. You can see a stump as a test, in which the assumption is that everything that lies on one side belongs to class 1, and everything that lies on the other side belongs to class 0.

There are a lot of combinations possible for a tree stump. Let’s see how many combinations we face in our simple example? Let’s take a minute to count them. 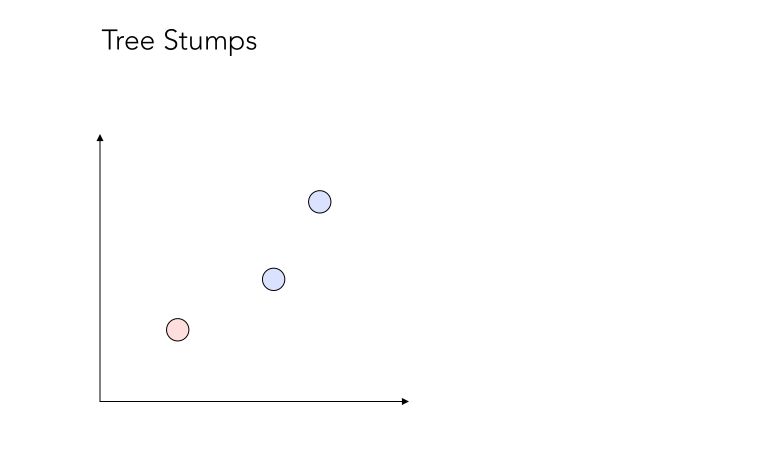 Well, the answer is… 12 ! It might seem surprising, but it’s rather easy to understand. 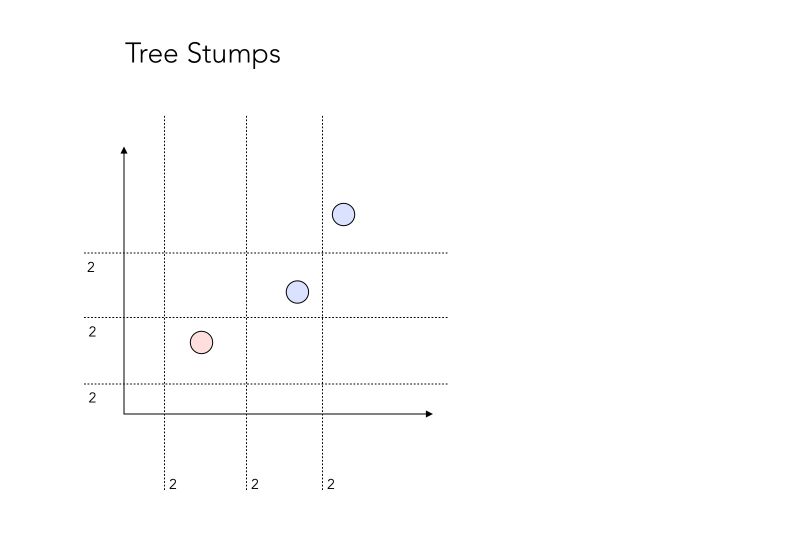 There are 12 possible “test” we could make. The “2” on the side of each separating line simply represents the fact that all points on one side could be points that belong to class 0, or class 1. Therefore, there are 2 tests embedded in it.

At each iteration \(t\), we will choose \(h_t\) the weak classifier that splits best the data, by reducing the overall error rate the most. Recall that the error rate is a modified error rate version that takes into account what has been introduced before.

As stated above, the best split is found by identifying at each iteration \(t\), the best weak classifier \(h_t\), generally a decision tree with 1 node and 2 leaves (a stump). Suppose that we are trying a predict whether someone who wants to borrow money will be a good payer or not :

Simply note that decision tree classifiers like these can in practice be deeper than a simple stump. This will be a hyper-parameter.

The next logical step is to combine the classifiers into a Sign classifier and depending on which side of the frontier a point will stand, it will be classified as 0 or 1. It can be achieved this way :

Do you see any way to potentially improve the classifier?

By adding weights \(\alpha^t\) on each classifier !

Let’s wrap up in a small pseudo-code what we covered so far.

b. Compute the weight of the classifier chosen :

The key elements to remember from it are :

And we’re done! This algorithm is called AdaBoost. This is the most important algorithm one needs to understand to fully understand all boosting methods.

Boosting algorithms are rather fast to train, which is great. But how come they’re fast to train since we consider every stump possible and compute exponentials recursively?

Well, here’s where the magic happens. If we choose properly \(\alpha^t\) and \(Z\), the weights that are supposed to change at each step simplify to :

This is a very strong result, and it does not contradict the statement according to which the weights should vary with the iterations, since the number of training samples that are badly classified drops, and their total weights is still 0.5!

And there’s another trick: any classifier that tries to split 2 well-classified data points will never be optimal. There’s no need to even compute it. 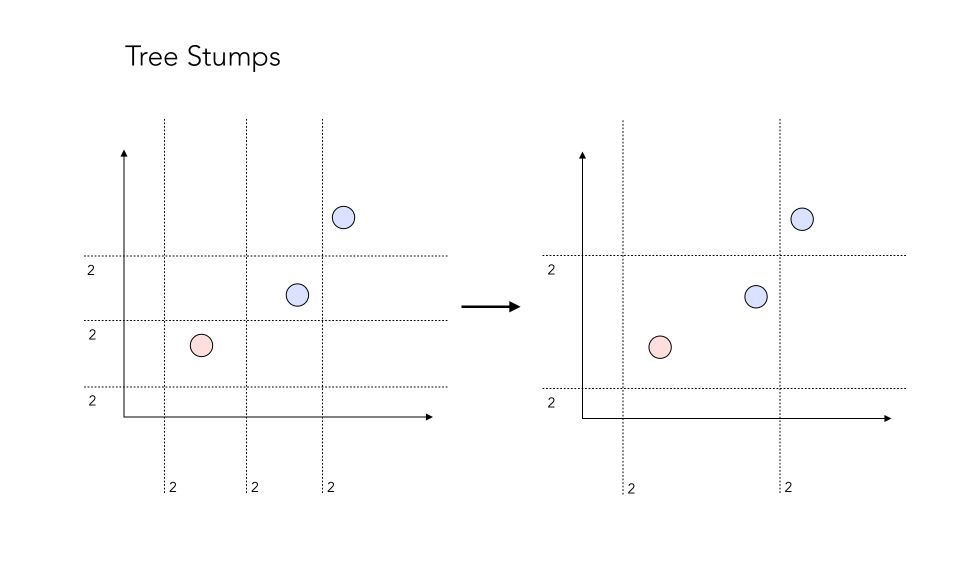 AdaBoost has for a long time been considered as one of the few algorithms that do not overfit. But lately, it has been proven to overfit at some point, and one should be aware of it. AdaBoost is vastly used in face detection to assess whether there is a face in the video or not. AdaBoost can also be used as a regression algorithm. 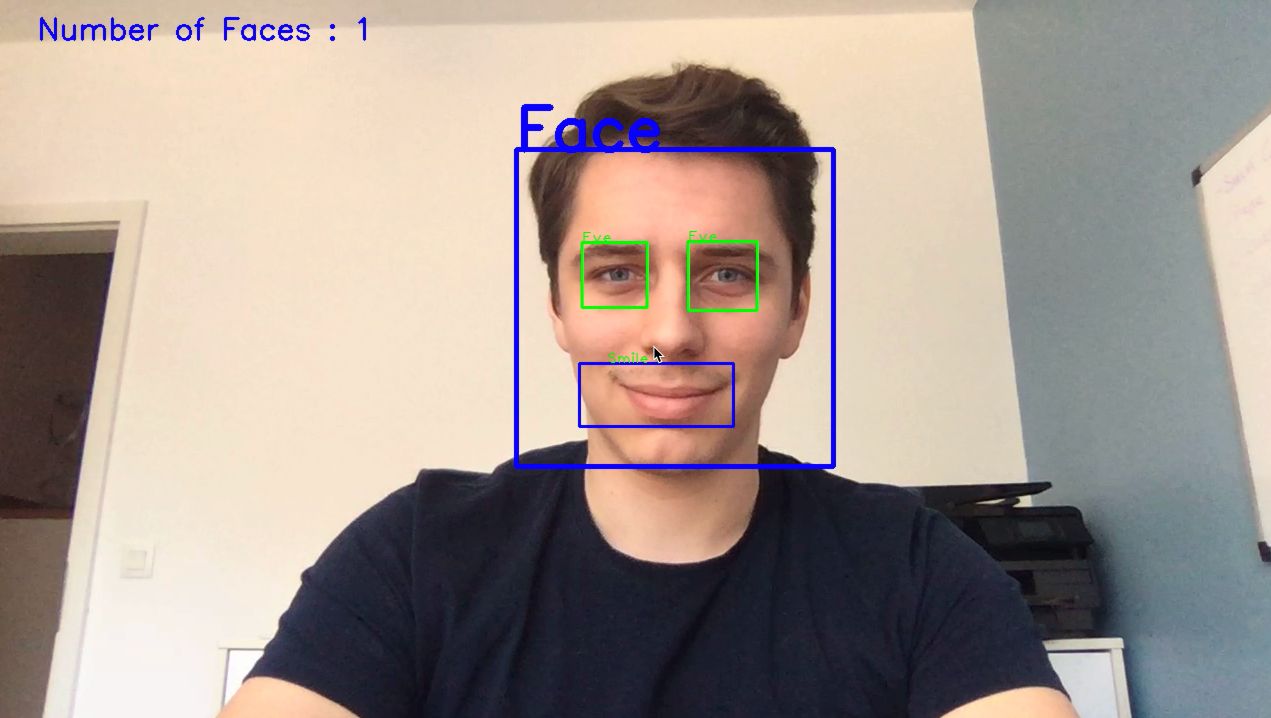 Now, we’ll take a quick look at how to use Adaboost in Python using a simple example on a handwritten digit recognition.

If we stick to a Decision Tree Classifier of depth 1 (a stump), here’s how to implement AdaBoost classifier :

And it should head a result of around 26%, which can largely be improved. One of the key parameters is the depth of the sequential decision tree classifiers. How does accuracy improve with depth of the decision trees?

And the maximal score is reached for a depth of 10 in this simple example, with an accuracy of 95.8%.

Conclusion : I hope that this article introduced clearly the concept of AdaBoost and that it does now seem clear to you. Don’t hesitate to drop a comment if you have any question.