1. What is signal processing?

A signal is a time-varying physical process.

Signal processing is implied when you:

This is called signal representation. We will however focus on 1-dimensional signals.

Signal processing is divided in 2 categories:

A 1-dimensional continous signal could for example be:

A discrete-time signal quantizes the time and the signal amplitude. We might have a discrete signal taking the following form:

Where the first value is the index, and the second is the value. The discrete signal can be represented as :

Continuous and discrete signals can be represented as such: 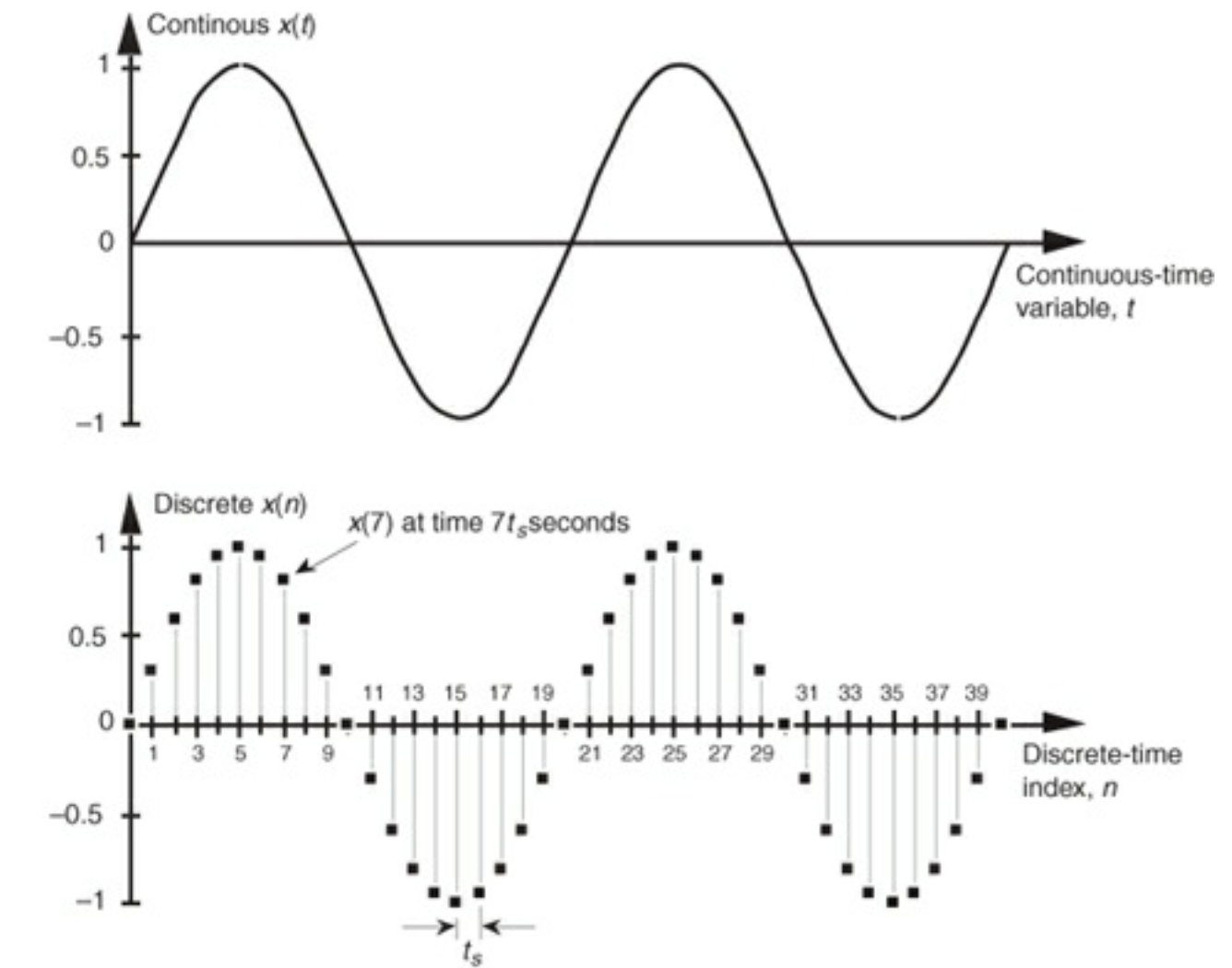 We can apply transformations to a continuous signal \(x(t)\). For example:

To summarize, we can apply the following transformations:

A Discrete System is any software operating on a discrete-time signal sequence, and producing a discrete output sequence using a transformation. A simple Discrete System can be defined by a difference equation:

The same concepts as for continuous signals regarding the transformations apply.

For what comes next, we will focus exclusively on continuous signals.

We talk about even signals.

To test if a function is even or odd or neither, just replace t by -t in the expression and check for the equality.

A signal is periodic if the same pattern repeats for ever.

There are some elementary signals which are basic building blocks of many other signals:

The unit step is a function which is 1 when t is greater or equal than 0, and 0 otherwise.

For example, a function that takes values 1 between 0 and 1, and 0 everywhere else can be seen as the unit step minus a shifted version of the unit step by 1 unit:

This function is 0 everyhere except at the origin, where the value is 1.

The equivalence property states that:

This can be used to reduce the expression of this signal for example:

The sifting property similartly states that:

This can be used to reduce the expression of this signal for example:

Note that there is a strong link between the unit impulse and the unit step functions. Indeed:

Recall that a system is any software operating on a signal sequence, and producing an output sequence using a transformation.

A system is said to be memoryless if the output at a time t depends only on the input at that same time, and not on information from the past.

The system mentioned above is obviously not memoryless since the output depends on previous or future values of the input.

A system is said to be causal if the output only depends on current or previous values of the input, not future values.

A song for example might be a non-causal system since the signal has already been totally recorded.

A system is said to be BIBO (bounded-input bounded-output) stable if for any bounded input, we get a bounded output. The signal should be within a finite range.

An example of a non-invertible system is the following:

The following system is not time-invariant for example:

A system is said to be LTI (or Linear & Time-Invariant) if it is both Linear and Time-invariant.

The impulse response of a dynamic system is the output when presented with a brief input signal called an impulse.

If a system is LTI, and you make an impulse signal \(\delta(t)\) go through a black-box system, then the impulse response, aka the output, is \(h(t)\).

To find the impulse response, one simply needs to replace the input by \(\delta(t)\). For example:

Leads to the impulse response:

Take an LTI system. Based on these properties, you know that:

What this highlights when we apply a series of linear transformations here is the following. By sifting property, the left term is equal to \(x(t)\).

This transformation is called the convolution, and is denoted as such:

This mainly means that for an LTI system, when the impulse response is given, you can find the output of any input if you just find the result of the integral.