In this series of articles, we’ll focus on Markov Models, where an when they should be used, and extensions such as Hidden Markov Models.

We’ll cover into further details when to use Markov Models. For the moment, one should remember that Markov Models, and especially Hidden Markov Models (HMM) are used for : 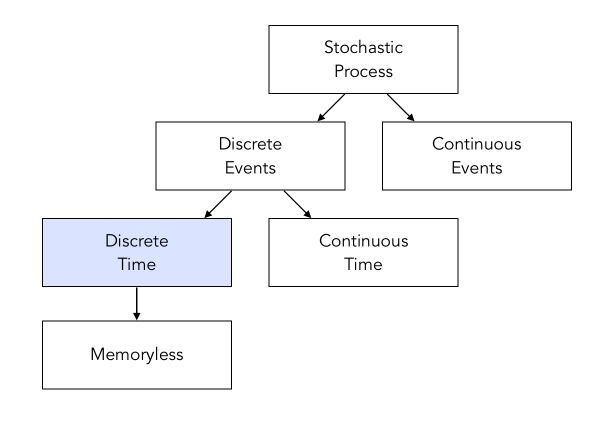 The process starts at an initial state \(q_1\). Then, according to transition probabilities, we move between the states. We can compute the probability of a sequence of states using Bayes Rule :

To characterize the model, we need :

As you might guess, this is complex to achieve since we need to know a lot of parameters.

What is a Markov Chain? 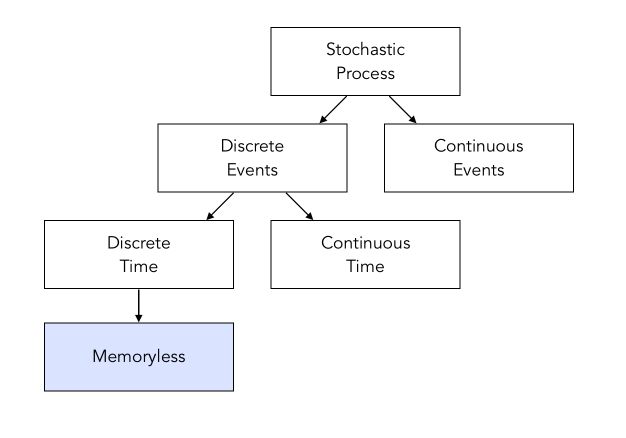 Discrete Time Markov Chain (DTMC) are time and event discrete stochastic process. Markov Chains rely on the Markov Property that there is a limited dependence within the process :

Let’s illustrate this! Consider a simple maze in which a mouse is trapped. We will denote \(q_t\) the position of the maze in which the mouse stands after \(t\) steps. We will assume that the mouse does not have a memory of the steps it took within the maze. It simply goes to the position randomly, following the probability written next to each move. 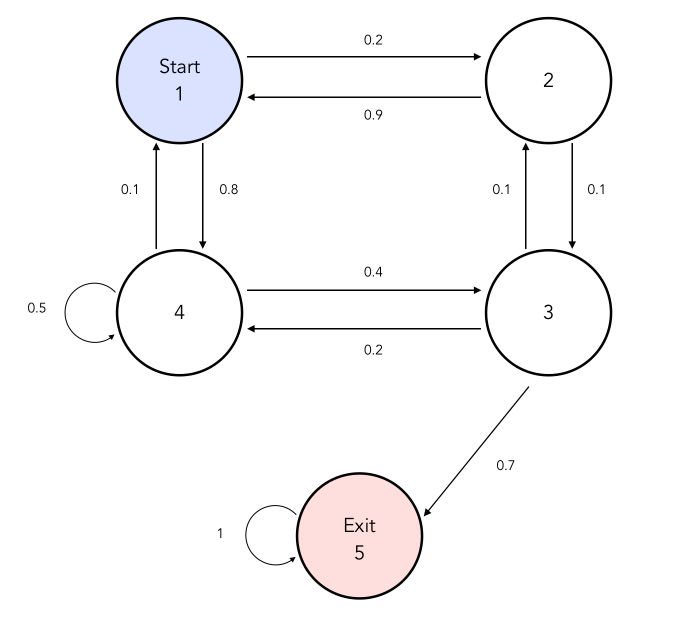 The states here could represent may things, including an NLP project, e.g 1 = Noun, 2 = Verb, 3 = Adjective… and we would be interested in the probabilities have a verb after a noun for example.

A Discrete Time Markov chain is said to be homogeneous if its transition probabilities do not depend on the the \(t\) :

In our example, the transition matrix would be :

There are several ways to describe a state. Let \(p_{ii}\) be the probability of returning to state \(i\) after leaving \(i\) :

Therefore, a state is positive recurrent if the average time before return to this same state denoted \(T_{ii}\) is finite.

A DTMC is irreducible if a state \(j\) can be reached in a finite number of steps from any other state \(i\). An irreducible DTMC is, in fact, a strongly connected graph.

A state in a discrete-time Markov chain is periodic if the chain can return to the state only at multiples of some integer larger than 1. 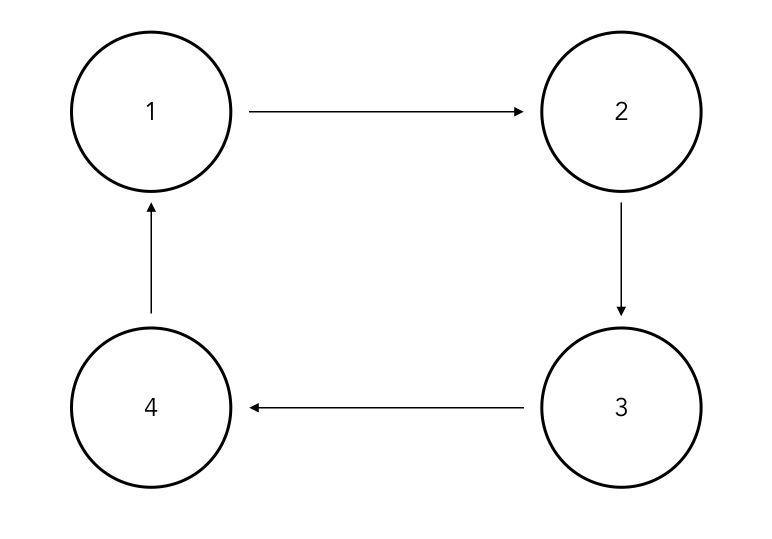 Otherwise, it is called aperiodic. A state with a self-loop, i.e \(a_{ii}\) is always aperiodic.

Then, \(T_i\) follows a geometric distribution :

For an irreducible / aperiodic DTMC, the distribution \(\pi(n)\) converges to a limit vector \(\pi\) which is independent of \(\pi(0)\) and is the unique solution of :

When we want to generate a sequence, we start from an initial state \(q_1 = 1\) for example. The general idea is that :

It can be illustrated this way. Suppose we are given the following model : 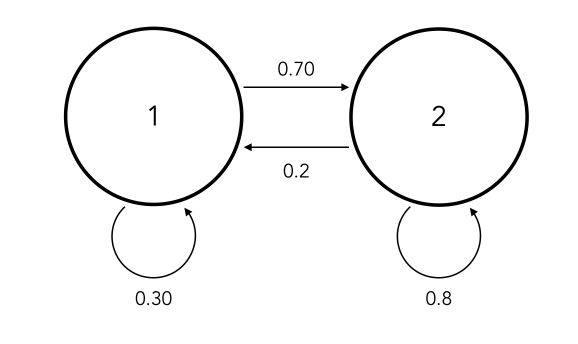 This corresponds to the following matrix \(A\). We are also given the initial vector of probabilities : 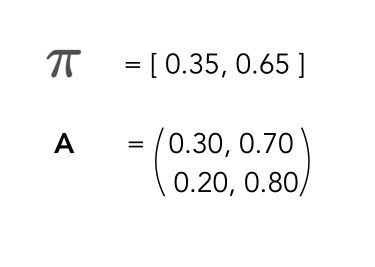 The generator works as follows, by drawing successively random number of identifying which transition is referred to. 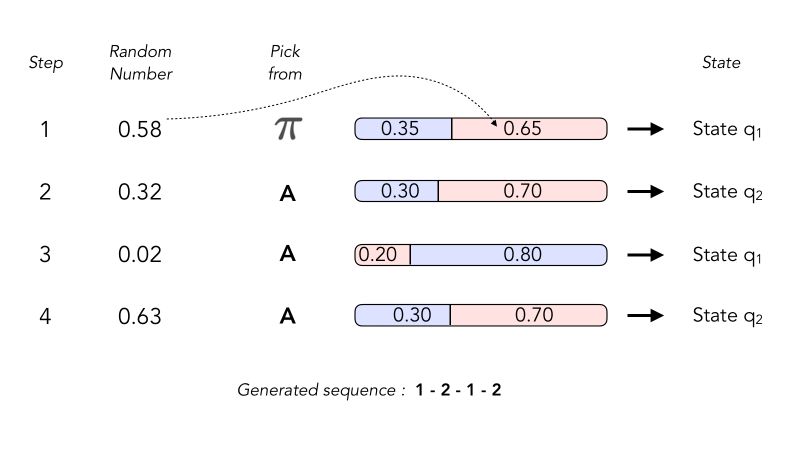 Therefore, the probabilities in the first line correspond to the transition probability from the beginning of the word to the next letter.

Here is a partial schema of the Markov Chain, in which I have represented some of the connexions : 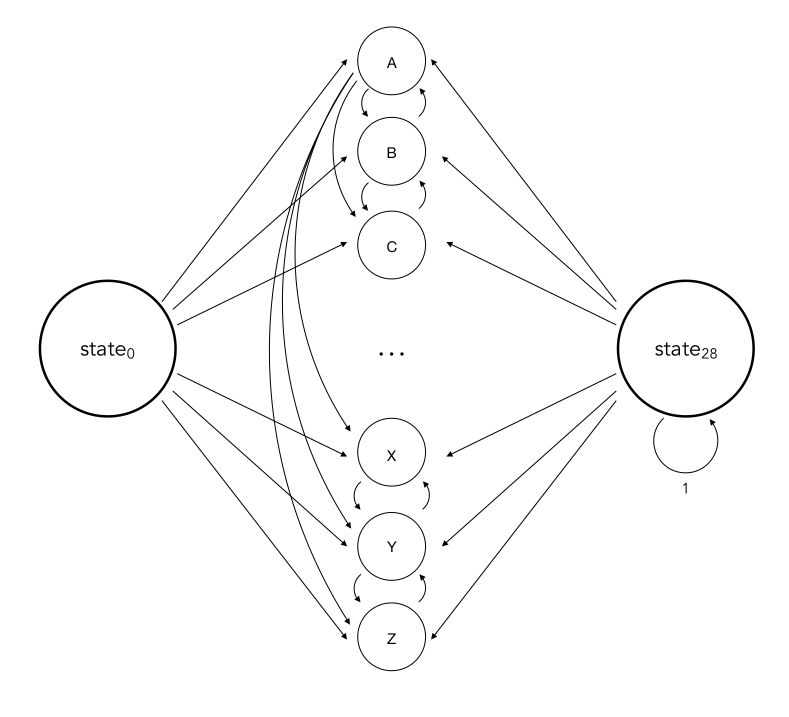 To be able to interpret what is going on, we define a dictionary with the correspondance between the index and the letter :

We will aim to generate a sequence of words. Using what we just covered previously, we can define a function that creates the new state starting from a given state :

To understand what this is exactly doing, let’s plot the cumulative distribution and the random threshold : 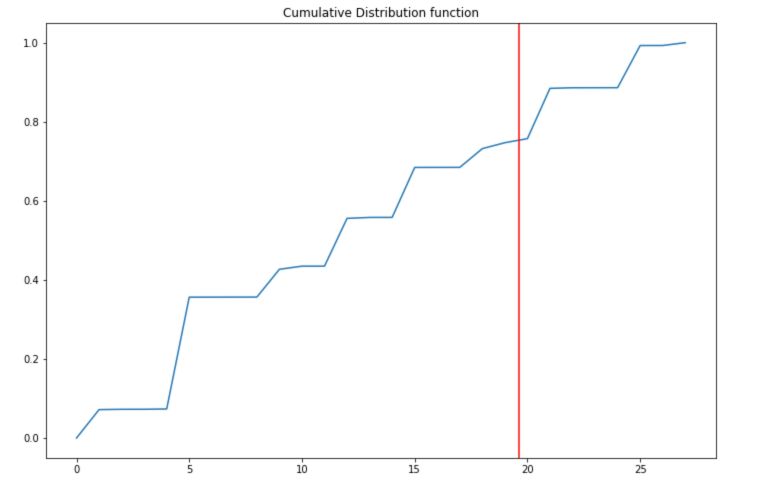 The cumulative function and the threshold allow us to pick a letter starting from a given state. Now, let’s generate a sequence from scratch!

Now, let’s look at some of the words it can generate in english :

Most of the words generated will not mean anything, but be grammatically close to English. You might encounter real words such as the or play.

The aim is now to generate a sequence of words to make an actual sentence. We need to modify a bit the transition function :

The next dictionnary will be the following :

We modify the transition function according to the rules defined above. We need to append a new line and a new column so that the matrix now has a dimension 29*29.

Then, we need to modify the function that generates the next state to include the next character :

After a few tries I obtained a sentence with 2 real English words :

Markov Chains can also be used to identify the language of a sequence! Indeed, to find the most “likely” language, all we need to do is to multiply the transition probabilities for a given sequence and identify the highest result.

To try this, we’ll modify our dictionary to have specific characters for the beginning and the end of each word, so that the sequence we’ll send it will have the form: to-+be-+or-+not-+to-+be-. for example.

Let’s now compute the likelihood of a sequence for each language :

We can now try our model :)

And on an english sequence :

The models we presented here a simplistic but useful to understand deeply what is going on.

Conclusion : I hope this quick introduction to Markov Chains was helpful. Let me know in the comments what sequence of words you have ! :)