In previous blog posts “Complexity vs. explainability” and “Interpretability and explainability (1/2)”, we highlighted the tradeoff between increasing the model’s complexity and loosing explainability, and the importance of interpretable models. In this article, we will finish the discussion and cover the notion of explainability in machine learning.

As previously, we will use the UCI Machine learning repository Breast Cancer data set. It is also available on Kaggle. Features are computed from a digitized image of a fine needle aspirate (FNA) of a breast mass. They describe characteristics of the cell nuclei present in the image. There are 30 features, including the radius of the tumor, the texture, the perimeter… Our task will be to perform a binary classification of the tumor, that is either malignant (M) or benign (B).

Start off by importing the packages :

Then, read the data and apply a simply numeric transformation of the label (“M” or “B”).

If we are not constrained to interpretable models and need higher performance, we tend to use black box models such as XGBoost for example. For various reasons we might want to provide an explanation of the outcome and the internal mechanics of the model. In such case, using model explainability techniques is the right choice.

Explainability is useful for :

We will explore several techniques of model explainability :

What features have the biggest impact on predictions? There are many ways to compute feature importance. We will focus on permutation importance, which is fast to compute and widely used.

Permutation importance is computed after a model has been fitted. It shows how randomly shuffling the rows of a single column of the validation data, leaving the target and all other columns in place affects the accuracy.

For example, say that as before, we try to predict if a breast tumor is malignant or benign. We will randomly shuffle, column by column, the rows of the texture, the perimeter, the area, the smoothness… 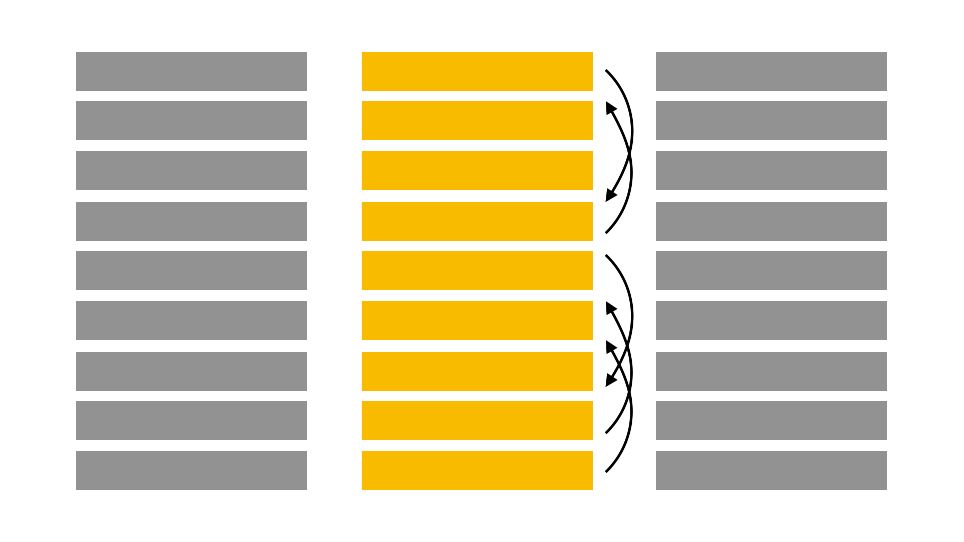 Randomly re-ordering a single column should decrease the accuracy. Depending on how relevant the feature is, it will more or less impact the accuracy. Let’s illustrate this concept with a Random Forest Classifier.

We can compute the Permutation Importance with Eli5 library. Eli5 is a Python library which allows to visualize and debug various Machine Learning models using unified API. It has built-in support for several ML frameworks and provides a way to explain black-box models.

We can then compute the permutation importance : 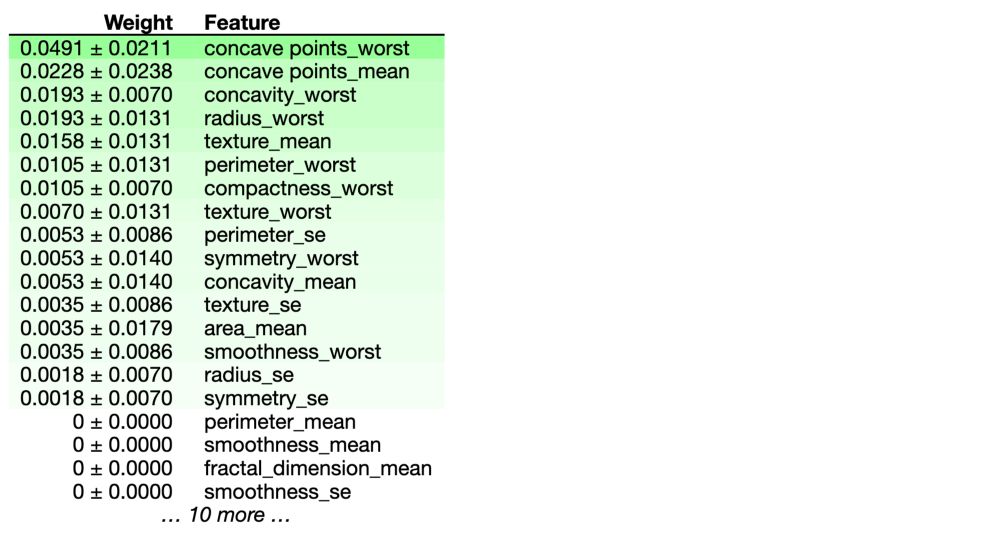 In our example, the most important feature is concave points_worst. The first number in each row shows how much model performance decreased with a random shuffling (in this case, using “accuracy” as the performance metric). We measure the randomness by repeating the process with multiple shuffles.

To build ICE plots, simply use pycebox. Start off by installing the package :

And build the plots : 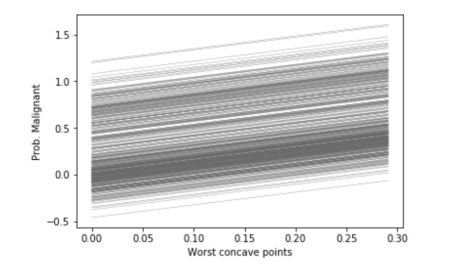 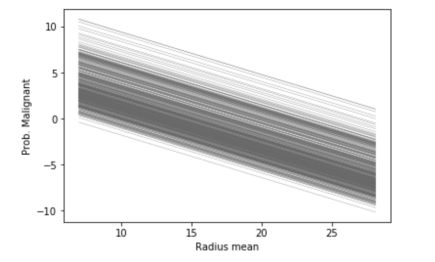 Logically, since our linear model involves a linear relation between the inputs and the output, the ICE plots are linear. However, if we use a Gradient Boosting Regressor to perform the same task, the linear relation does not hold anymore. 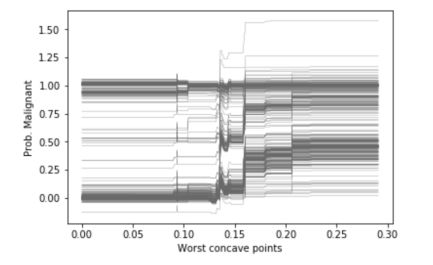 Thanks to ICEs, we understand the impact of a feature on the value of the outcome for each individual instance, and we easily understand trends. However, the ICE curves only display one feature at a time, and we cannot plot the joint importance of 2 features for example. Partial dependence plots overcome this issue.

Just like ICEs, Partial Dependence Plots (PDP) show how a feature affects predictions. They are however more powerful since they can plot joint effects of 2 features on the output.

Partial dependence plots are calculated after a model has been fitted. It tries to split the effect of every feature in the overall model’s predictions.

We start by selecting a single row. We will use the fitted model to predict the prediction of that row. But we repeatedly alter the value for one variable to make a series of predictions.

For example, in the breast cancer example used above, we could predict the outcome for different values of the radius : 10, 12, 14, 16…

We build the plot by:

We don’t use only a single row, but many rows to do build this plot. The blue area corresponds to an empirical confidence interval. PDPs can be compared with ICEs for these kind of plots, but they show the average trend and confidence levels instead of individual lines. It makes trends easier to understand, although we loose the low-level vision for each prediction.

We can plot the Partial Dependence Plot using PDPbox. The goal of this library is to visualize the impact of certain features towards model prediction for any supervised learning algorithm using partial dependence plots. 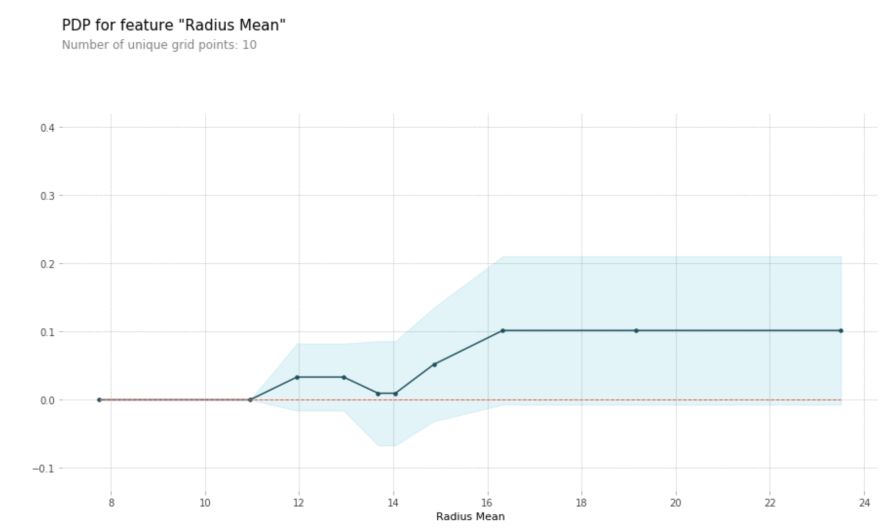 We can also plot interactions between features on a 2D graph. 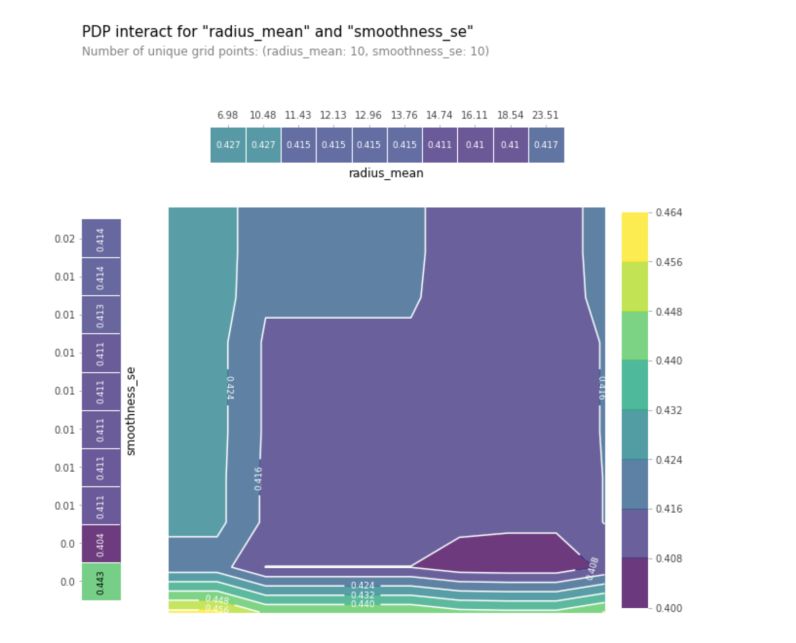 This plot helps to identify regions in which the tumor is more likely to be benign (darker regions) rather than malignant (lighter regions) based on the interaction between the mean of the radios and the standard error of the smoothness. We can then create similar plots for all pairs of variables. 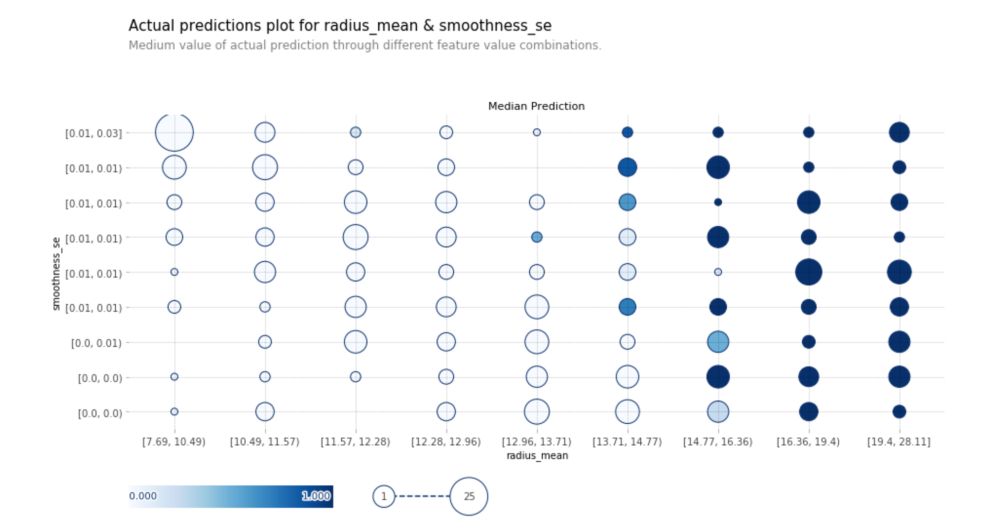 We have seen so far techniques to extract general insights from a machine learning model. Shapley values are used to break down a single prediction.

SHAP (SHapley Additive exPlanations) values show the impact of having a certain value for a given feature in comparison to the prediction we’d make if that feature took some baseline value.

In the breast cancer example, we could wonder how much was a prediction driven by the fact that the radius was 17.1mm, instead of some baseline number? That could help a doctor explain the predictions to a patient and understand how the internal mechanics of a model lead to the given outcome.

We can decompose a prediction with the following equation:

We will use the SHAP library. We will look at SHAP values for a single row of the dataset (we arbitrarily chose row 5). To install the shap package :

Then, compute the Shapley values for this row, using our random forest classifier fitted previously.

The shap_values is a list with two arrays. It’s cumbersome to review raw arrays, but the shap package has a nice way to visualize the results.

The output prediction is 0, which means the model classifies this observation as benign.

The base value is 0.3633. Feature values that push towards a malignant tumor causing are in pink, and the length of the region shows how much the feature contributes to this effect. Feature values decreasing the prediction and making our tumor benign are in blue. The biggest impact comes from radius_worst.

We can also just take the mean absolute value of the SHAP values for each feature to get a standard bar plot. It produces stacked bars for multi-class outputs: 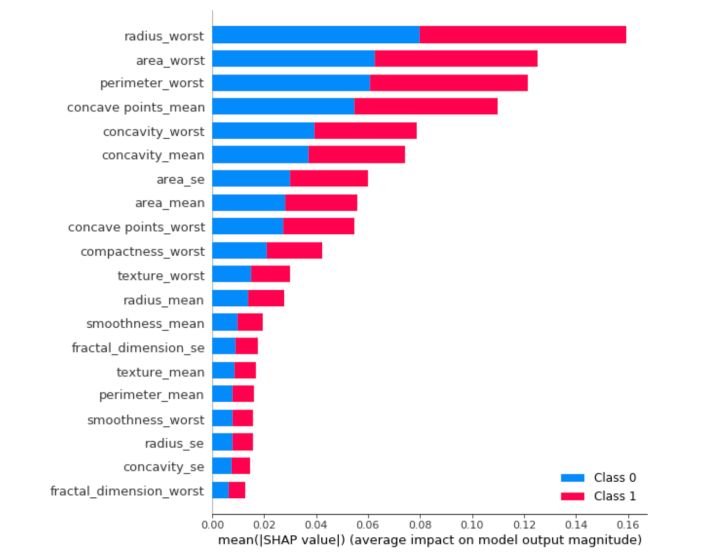 Approximation models (or global surrogate) is a simple and quite efficient trick. The idea is really simple. We train an interpretable model to approach the predictions of a black-box algorithm.

We keep the original data, and use as targets the predictions made by the black-box algorithm. We can use any interpretable model, and benefit from all the advantages of the model chosen.

We must however pay attention to the performance of the interpretable model, since it might perform poorly in some regions.

Instead of training an interpretable model to approximate a black box model, LIME focuses on training local explainable models to explain individual predictions. We want the explanation to reflect the behavior of the model “around” the instance that we predict. This is called “local fidelity”.

LIME uses an exponential smoothing kernel to define the notion of neighborhood of an instance of interest.

We first select the instance we want to explain. By making small variations in the input data to the black-box model, we generate a new training set with these samples and their predicted labels. We then train an interpretable classifier on those new samples, and weight each sample according to how “close” it is to the instance we want to explain.

We benefit from the advantages of the interpretable model to explain each prediction.

We can implement LIME algorithm in Python with LIME package :

Then, lime takes only numpy arrays as inputs :

We have defined the explainer. We can now explain an instance :

We make the choice to use 5 features here, but we could use more. To display the explanation :

Since we had the show_all parameter set to false, only the features used in the explanation are displayed. The Feature - Value table is a summary of the instance we’d like to explain. The value column displays the original value for each feature.

The prediction probabilities of the black box model are displayed on the left.

Machine learning explainability techniques are an opportunity to use more complex and less transparent models, that usually perform well, and maintain trust in the output of the model.

If you’d like to read more on these topics, make sure to check these references :