This series of articles provides a summary of the course : “Introduction to Deep Learning with PyTorch” on Udacity.

The perceptron can be seen as a mapping of inputs into neurons. Each input is represented as a neuron : 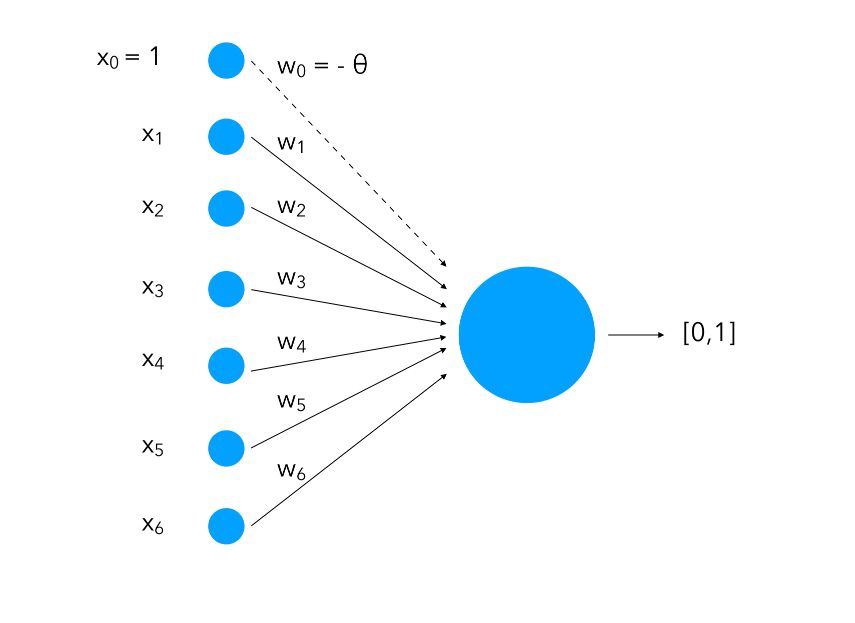 We attach to each input a weight ( \(w_i\)) and notice how we add an input of value 1 with a weight of \(- \theta\). This is called bias. What we are doing is instead of having only the inputs and the weight and compare them to a threshold, we also learn the threshold as a weight for a standard input of value 1.

The inputs can be seen as neurons and will be called the input layer. Altogether, these neurons and the function (which we’ll cover in a minute) form a perceptron.

How do we make classification using a perceptron then?

The classification that checks of the output is greater than 0 is called a step function. 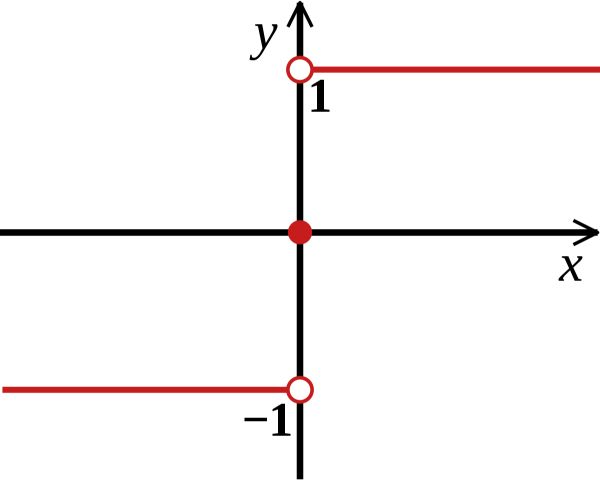 Perceptron can be used to represent logical operators. For example, one can represent the perceptron as an “AND” operator.

A simple “AND” perceptron can be built in the following way :

Where input_0 and input_1 represent the two feature inputs. We are shifting the bias by 1.2 to isolate the positive case where both inputs are 1.

However, solving the XOR problem is impossible : 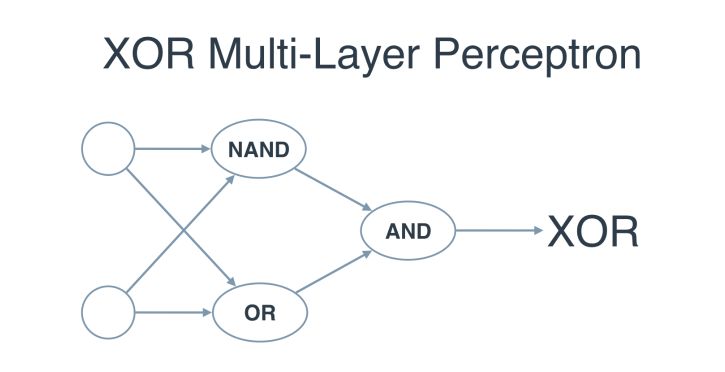 How do we identify the right weights that allow the best split ?

If the point (4,5) is misclassified and should belong to the class -1, and we have a learning rate of 0.1, what we’ll do is update the weights the following way :

We are slowly shifting the line towards the point that was misclassified. the new equation is therefore : 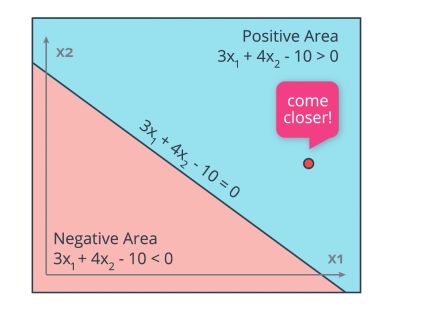 If another point is misclassified and should belong to the positive class, we’ll apply the same process except we’ll add weights.

To summarize, the pseudo-code for the Perceptron is the following :

We can quite simply implement a Perceptron in Python :

We cannot use our discrete examples above in this minimization algorithm, since the gradient descent would only work with continuous values. This is one of the limitations of the step function as an activation function. We tend to appy a softmax function instead. 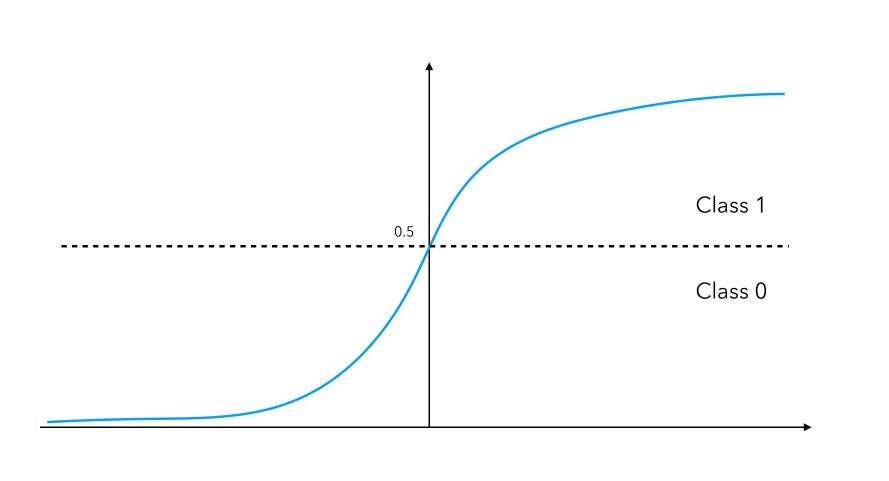 This activation function is smooth, differentiable (allows back-propagation) and continuous. We don’t have to output a 0 or a 1, but we can output probabilities to belong to a class instead. If you’re familiar with it, this version of the perceptron is a logistic regression with 0 hidden layers.

The perceptron can be seen as an error minimization algorithm. We choose the softmax function, a differentiable and continuous error function and try to minimize it by applying gradient descent.

We usually apply a log-loss error function. This error function applies a penalty to miscalssified points that is proportional to the distance of the boundary.

What if our problem involves more than 2 classes ? In such case, we apply a softmax function, that implies an exponential transformation to handle both positive and negative scores.

The Python implementation of the sotfmax can be done in the following way :

We are now back to a 2 class scenario. Since we now have probabilities of having each point belonging to each class. What should we do based on that to select a model or another? We can compute the maximum likelihood, which is simply :

\(\prod_i p_i\) for each probability of a point belonging to a class it is assigned to.

However, working with products can be challenging and painful when we have a large amount of data. We prefer applying a negative log transformation. This is the cross-entropy. 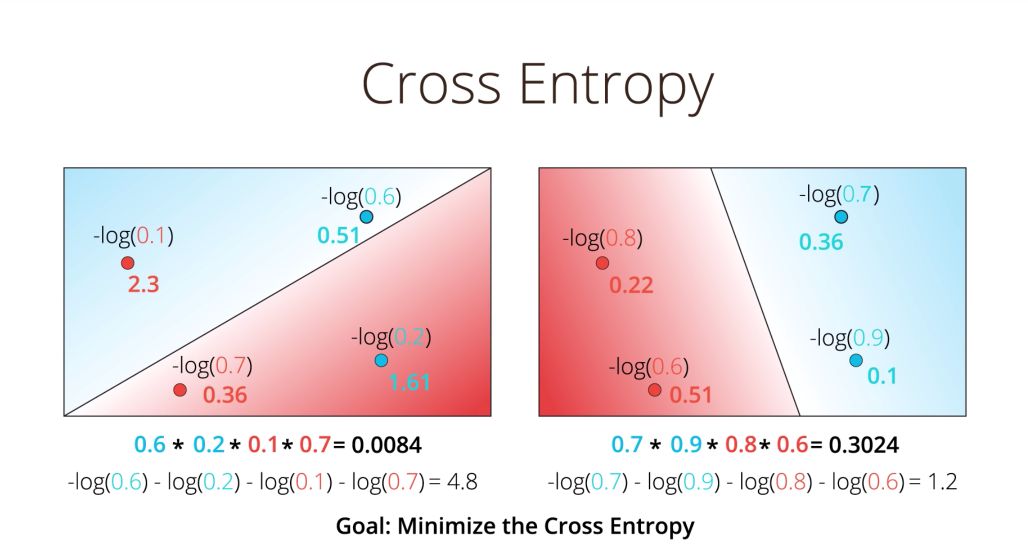 Our aim now becomes to minimize the cross-entropy !

The cross-entropy can be formalized as such :

The cross-entropy can be computed in Python :

As previously, we should consider applying the cross-entropy to multi-class cases :

The main idea behind the variable \(y_{ij}\) is that we only add the probabilities of the events that occured. We can also take the average rather than the sum for the cross entropy by convention.

The ‘prob’ given above is actually known by the formula of the perceptron itself :

Therefore, if we replace this value in the binary case :

And in the multiclass framework :

There is a rather nice trick to apply here for the derivatives computation. Start by computing :

This building block we be re-used when computing the two partial derivatives of the error function with respect to \(w_j\) and \(b_j\) :

Applying similar calculations, we can show that :

Overcall, the gradient can be seen in its vectorized form as :

We now have determined the gradients. For a “gradient descent”, we simply update the weights according to a learning rate in the inverse direction of the gradient :

Which can be rewritten as :

And for the bias :

Where \(\alpha\) represents \(\frac{1}{m}\) of the original gradient since we moved in the average direction.

To summarize, the gradient descent algorithm is the following :

In the Perceptron algorithm, we split the weights update depending on the value of \(y - \hat{y}\) :

This is the exact same algorithm as the gradient descent !

In most cases, the data is not linearly separable. 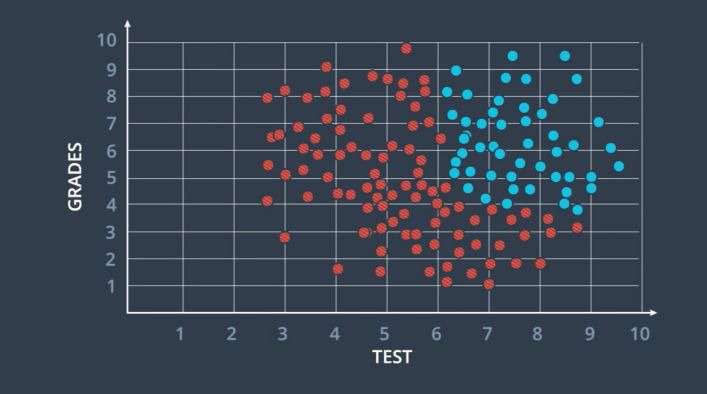 The basic idea is that we combine several linear models :

How do we combine those models ?

We can weight the models indiviually to assign more weight to a model than to another. Say that we want \(2/3\) of the overall weight on the first one. We simply apply a factor of 2 to the probabilites in the first model :

We can also add a bias to the individual models :

This is a new Perceptron ! This is the building block of Neural Networks. We take linear combinations of perceptrons to turn them into new perceptrons. We can visually represent this :

First we add a new perceptron as a linear combination of the 2 :

The outputs of the first 2 are the inputs of our perceptron :

And since the first two perceptrons share the same inputs, we can group them :

As usual, we can represent the bias outside the neuron, and highlight the fact that we use the sigmoid activation function. This is how we systematically represent neural networks :

We can generalize this architecture even more into 3 categories :

All together, they form what is called : “Deep Neural Networks”.

The output layer can have as many neurons as we’d like, depending on the nature of the problem.