Have you ever wondered how panoramas are formed? How can several pictures be combined? This is done through local features.

For what comes next, we’ll work a bit in Python. Import the following packages :

The key idea behind local features is to identify interest points, extract vector feature descriptor around each interest point and determine the correspondence between descriptors in two views.

Essentially, it can be illustrated this way :

How can we find these local features? By following this simple procedure :

We want our match to be reliable, invariant t geometric (translation, rotation, scale) and photometric (brightness, exposure) differences in the two views.

We want to look for unusual image regions. Textureless patches are nearly impossible to localize. We need to look for patches with large contrast changes, implying large gradients that vary along at least two orientations. This would be the case for corners for example.

Suppose we consider only a small window of pixels. We can define flat regions, edges, and corners the following way :

But how do we measure the change? What metric can we use?

We can sum up the squares differences (SSD) :

We are interested in how stable this metric is with respect to small variations in \(u\). This is defined by the auto-correlation function :

With a bit of calculus, we can appriximate the autocorrelation as :

\(A\) can be interpreted as a tensor where the outer products of the gradients are convolved with a weighting function.

How do we interpret the eigenvalues? 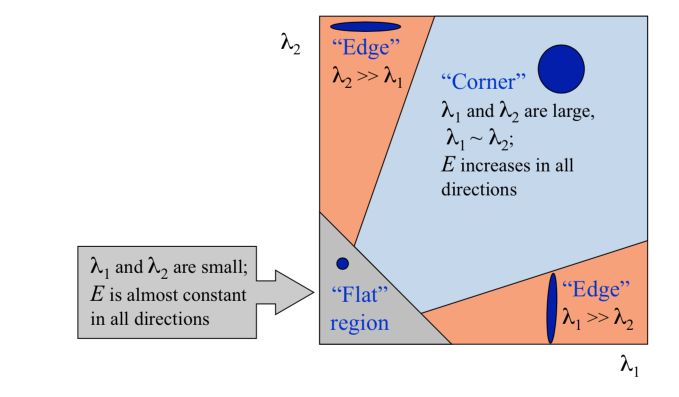 The process of the Harris corner detection algorithm can be represented in the following way : 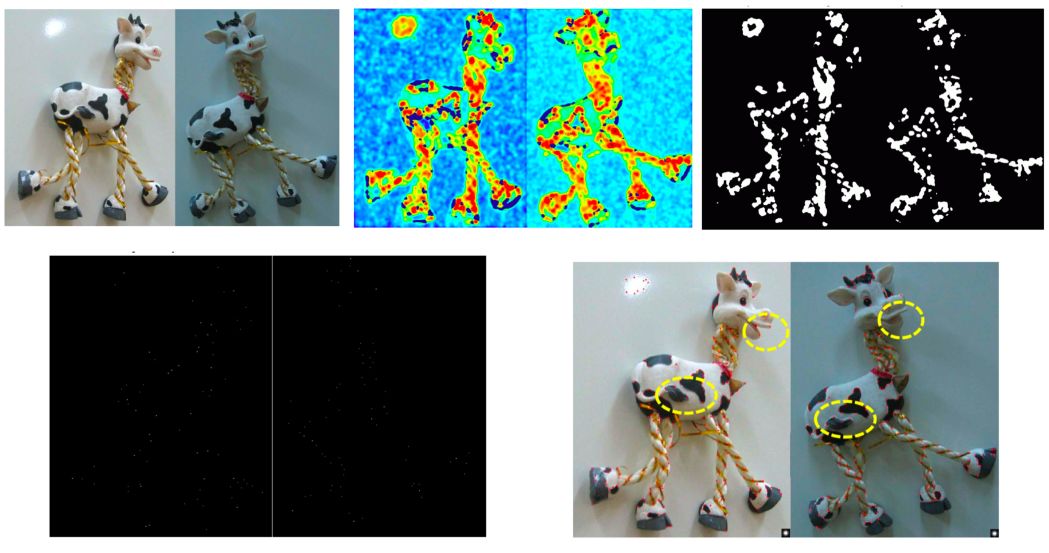 Harris Corner Detector is rotation invariant, but not scale-invariant (zooming out can make an edge become a corner for example).

How can we independently select interest points in each image such that the detections are repeatable across different scales? Well, we need to extract features at a variety of scales by using multiple resolutions in a pyramid and then matching features at the same level. We can also use a fixed window size with a Gaussian pyramid.

A Blob is a group of connected pixels in an image that shares some common property. Laplacian-of-Gaussian is a circularly symmetric operator for blob detection in 2D. We define the characteristic scale as the scale that produces the peak of Laplacian response. 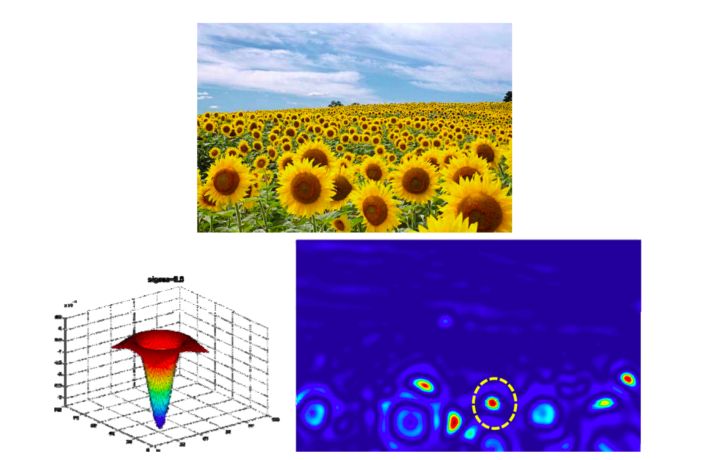 Interest points are local maxima in both position and scale.

The ideal feature should have the following properties :

Other interest point detectors include :

A first step is to normalize the pixels value. However, this is still very sensitive to shifts or rotations…

We compute the gradient at each pixel in a 16 × 16 window around the detected keypoint, using the appropriate level of the Gaussian pyramid at which the key point was detected. Down weight gradients by a Gaussian fall-off function (blue circle) to reduce the influence of gradients far from the center. In each 4 × 4 quadrants, compute a gradient orientation histogram using 8 orientation histogram bins.

The resulting 128 non-negative values form a raw version of the SIFT descriptor vector.

It is also possible to apply a PCA at this level to reduce the 128 dimensions.

This is a great article of OpenCV’s documentation on these subjects.

How can we make a descriptor invariant to the rotation?

We can rotate patch according to its dominant gradient orientation. 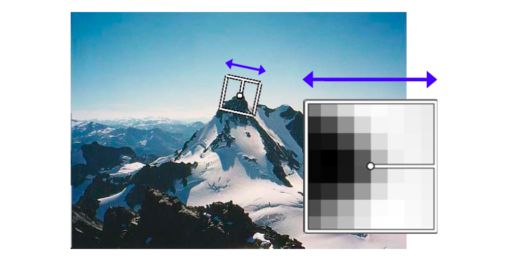 We have detected interest points and extracted a vector feature descriptor around each point of interest. We now need to determine the correspondence between descriptors in two views.

To match local features, we need for example to minimize the SSD. The simplest approach would be to compare all key points and compare them all. We set a matching threshold value to identify the nearest neighbor to our point of interest.

How do we measure performance?

**Conclusion **: I hope this article on image features was helpful. Don’t hesitate to drop a comment if you have any question.